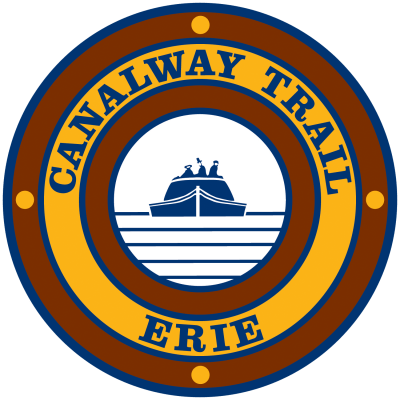 The Erie Canalway Trail links Albany to Buffalo and celebrates the history of the legendary Erie Canal. According to the New York State Canal Corporation, the Erie Canal, begun in 1817 and opened in 1825, “is considered the engineering marvel of the 19th Century. When the federal government concluded that the project was too ambitious to undertake, the State of New York took on the task of carving 363 miles of canal through the wilderness with nothing but the muscle power of men and horses.” 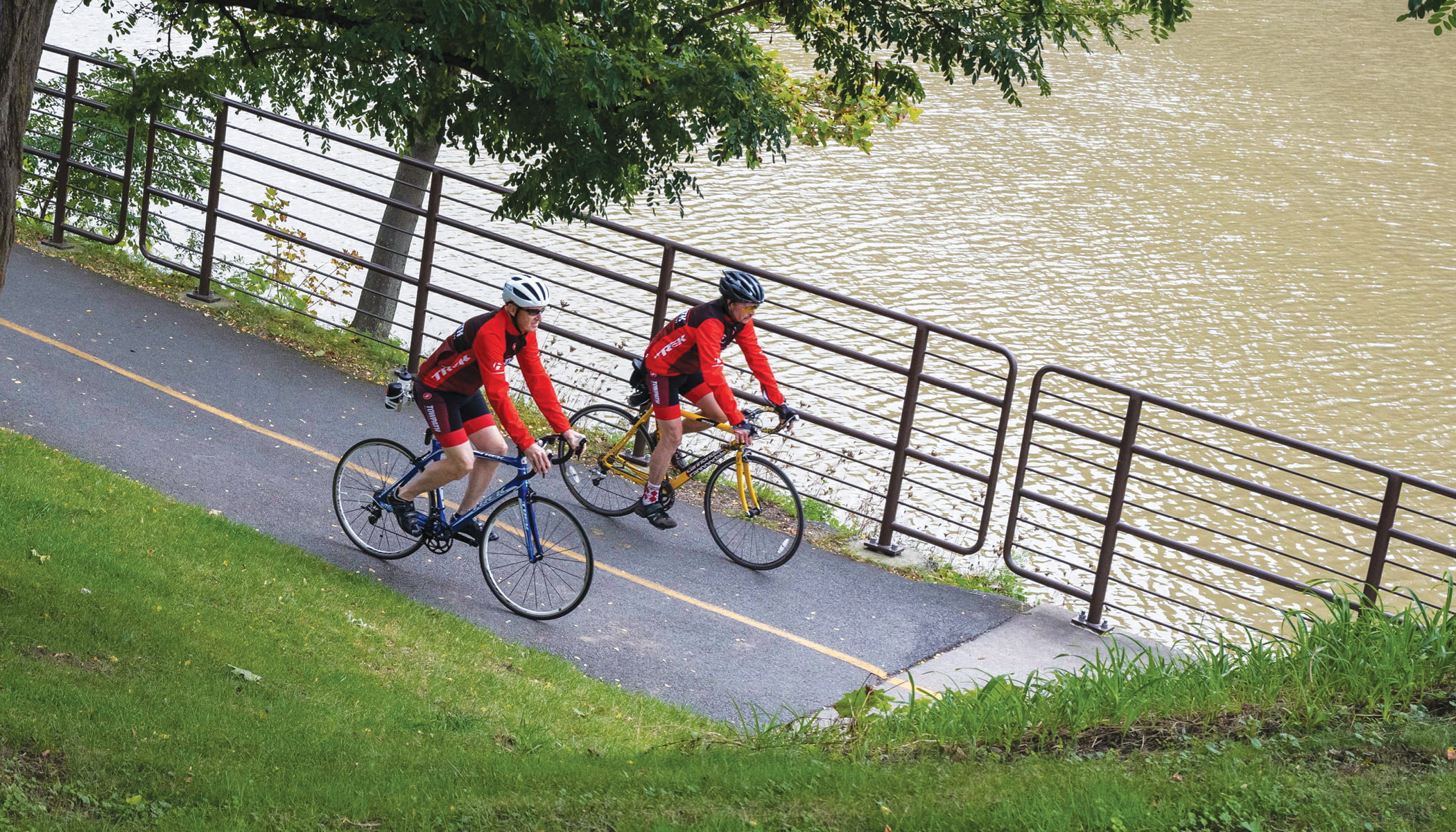 Along the Erie Canal
The CHAMPLAIN VALLEY TRAIL 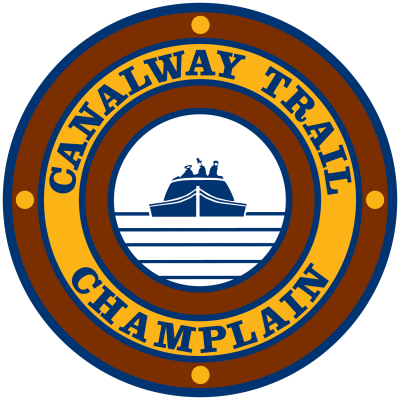 The Champlain Valley Trail links Albany to the Canadian Border, a stretch of the state that includes Saratoga Springs, Lake George, Lake Champlain and Plattsburgh. 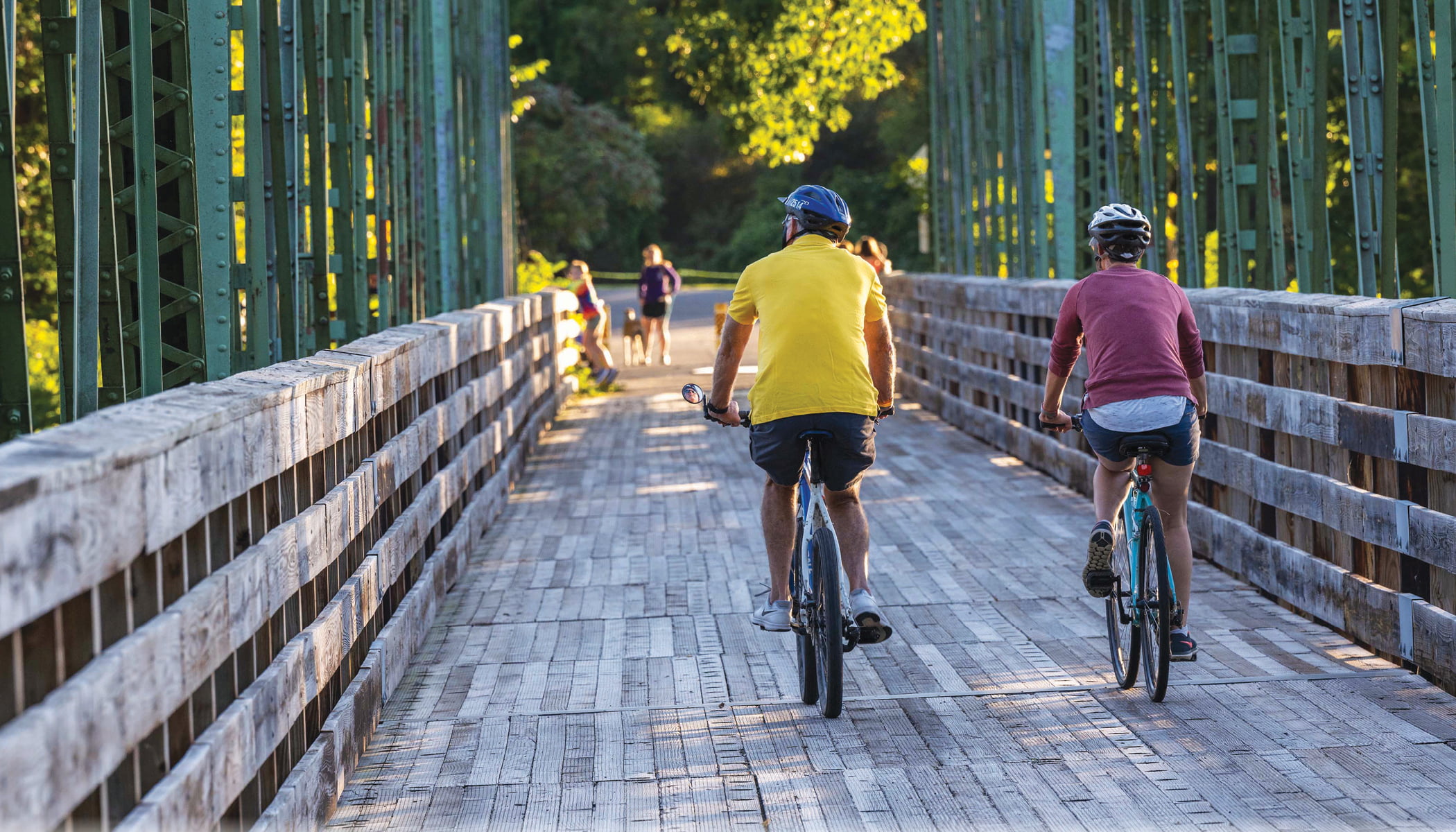 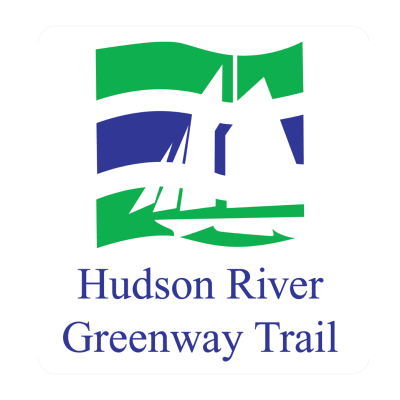 The Hudson Valley Greenway Trail links New York City to Albany and the section through Manhattan is one of the nation’s most popular trails, according to Parks & Trails New York, an Albany-based non-profit organization that works to protect parks, trails and public lands and keep them accessible to the public. 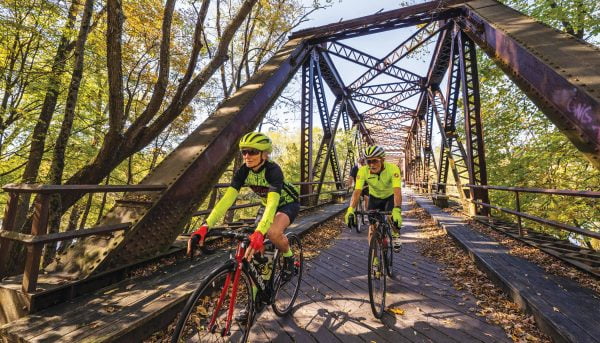 The Springtown Truss Bridge, aka the "Quiet Place" bridge 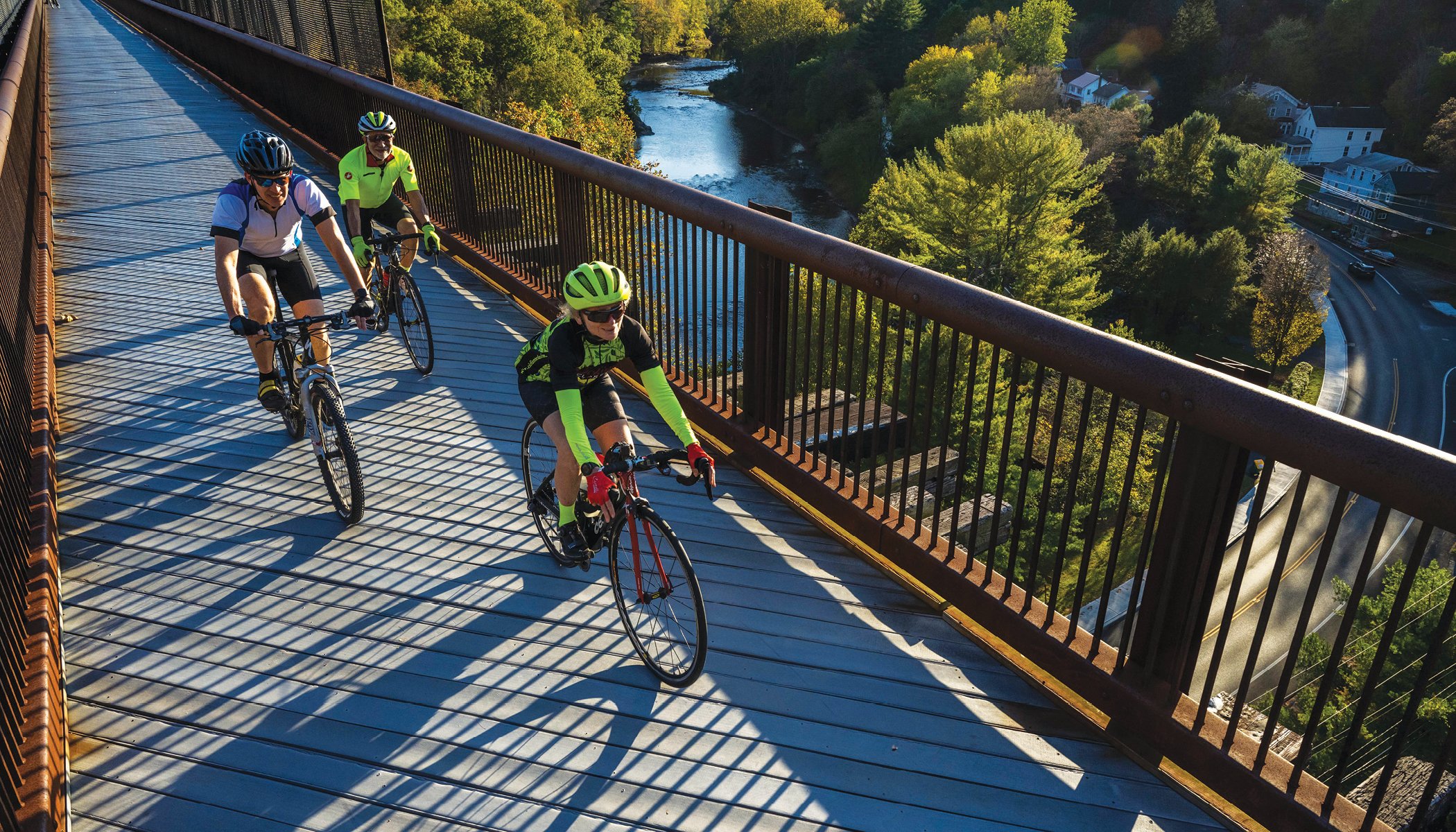 The Empire State Trail, One Bite At a Time

The scope of the Empire State Trail can be vast and breathtaking. But digesting it in smaller bites can turn this wonder of the world into a relaxing day trip, weekend getaway or week-long excursion.

Take it all in with Amtrak, as the Empire State Trail mirrors the rail lines that America’s railroad travels in New York.

Raise the stakes by bringing your bicycle on board thetrain, as Amtrak offers convenience when it comes to transporting your velocipede.

Last summer, Joe Gumpper of Albany biked the Empire State Trail from his home to Buffalo in five-and-a-half days. He averaged 50-70miles a day, which was mostly flat terrain with some hills. He met up with his husband in Buffalo and they drove back. This summer, they are considering taking the bike ride together and taking Amtrak back home, or vice versa.

The Empire State Trail/Canalway Trail, Gumpper said, is “kind of like riding through history.”

Bruce Wells of Scarsdale and his wife, Anne Hintermeister,are planning a trip on Amtrak, with their bikes, after Labor Day.

They’ll bike from their home to the Amtrak station in Yonkers, board a train to Niagara Falls and ride their bike back home on the Empire State Trail.

“It’s a great way to see places,” Wells said. “It’s easy to stop and enjoy the scenery or a view or stop in a small café and get a coffee and not have to figure out parking.”

For cycling, he recommends the stretch of the trail between Tonawanda and Clyde, which runs through the towns of Gasport, Millersport and larger towns like Albion, home to multiple churches with compelling stained glass.

Adding to the adventure are those municipalities in this area that have established areas along the Erie Canal where camping is permitted at no charge, Botzman said. Spencerport has a museum, laundry services and showers.

According to Dylan Carey of Parks & Trails New York: 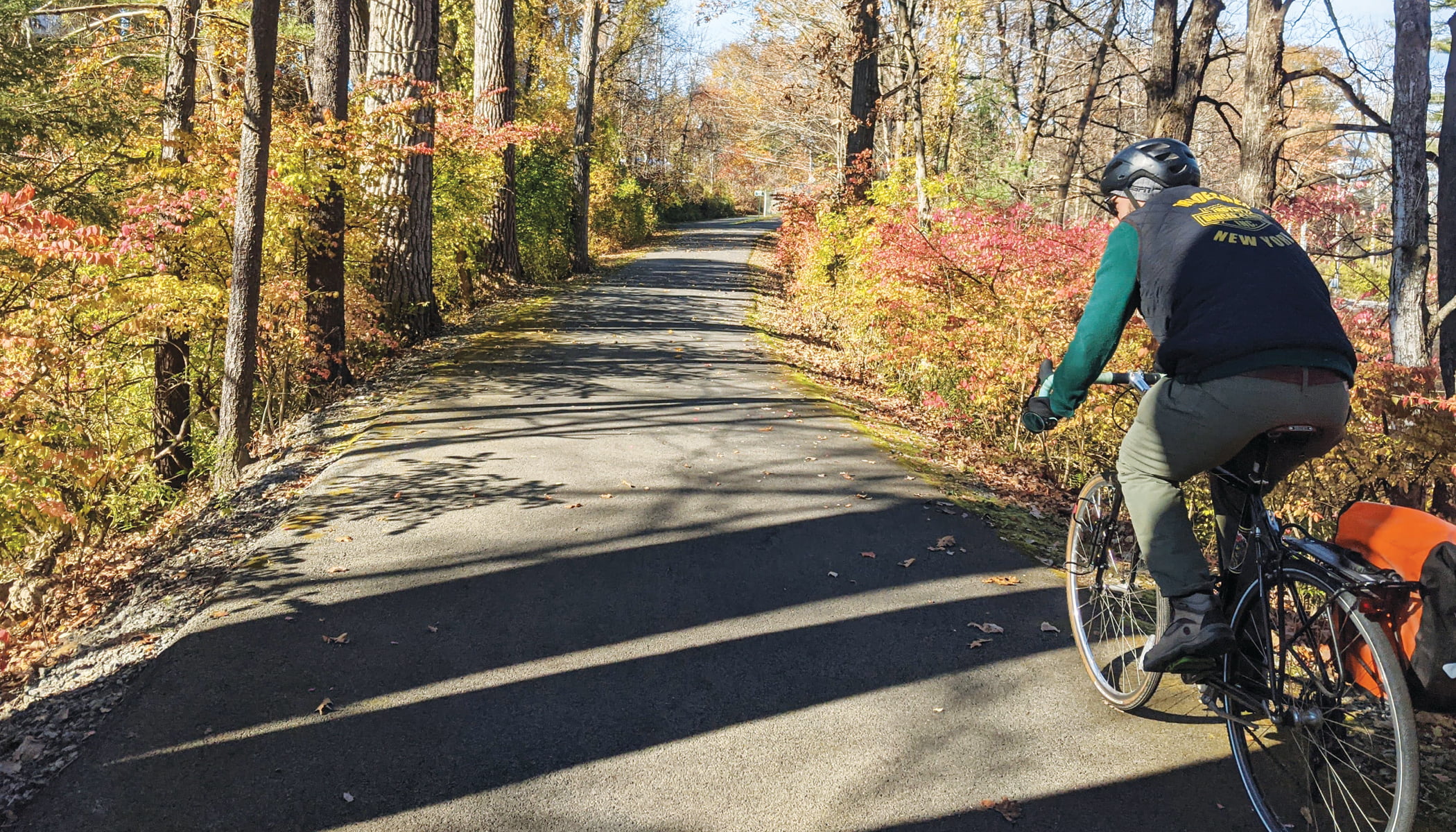 Speaking of the Capital District north of Albany, Carey said, “That stretch of the Empire State Trail is much different from the rest of it—mostly on-road, and mostly on the shoulder of relatively high traffic, high speed state highways,” Carey said.

“As such, we really only recommend that experienced riders do travel on that route.”

One leg of the Champlain Valley Trail is the Champlain Canalway Trail, which extends from Schuylerville, which sits east of Saratoga Springs, to Fort Miller.

This seven-mile section runs north from a visitor center on Ferry Street in the Village of Schuylerville. The first 1.25 miles is on the towpath of the 19th century Champlain Canal, through Hudson Crossing Park to the iconic Dix Bridge, which crosses the Hudson River. The route from there is designated along local roads to Fort Miller, passing by woods, farmlands, river views and the active Champlain Canal. This section ends at the intersection of North River Road and Route 4 in Fort Miller.

Another branch worth checking out, Carey said, stretches from the Fort Edward station—which has a bike shop in the same building as the station: Evergreen Bicycle Works. Offering new and used bicycles, gear, apparel, maintenance, repair and rentals, Evergreen Bicycle Works is located on the Empire State Trail. So you can step off your train, step into their shop and, if you didn’t bring a bike on board Amtrak, you can rent a bike.

According to EvergreenBicycleWorks.com, the store and the station are just minutes from the Feeder Canal/Champlain Canalway Trail. And cycling expeditions to Lake George, Fort Ann and Schuylerville can be done in a day right from the Evergreen front door. Carey recommends taking the Empire State Trail north and making a right onto the Feeder Canal Trail, into Glens Falls. Once in Glens Falls, which has its own Amtrak station, you can also access the Warren County Bikeway north to Lake George Village. The Warren County Bikeway, Carey said, is “one of the oldest rail trails in the state and one of the most enjoyable to ride.” 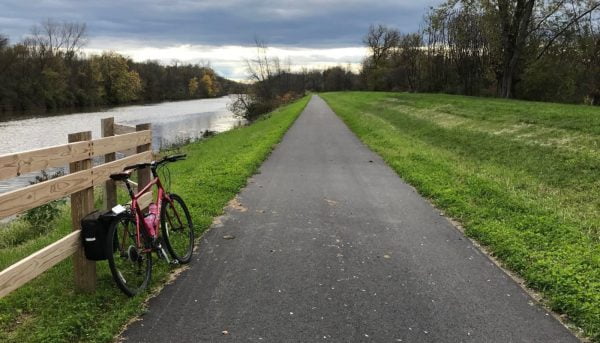 Along the Champlain Canal 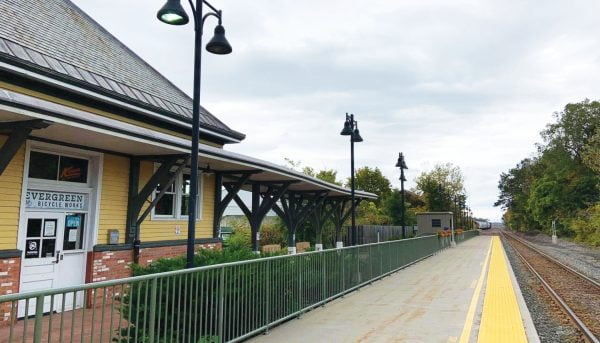 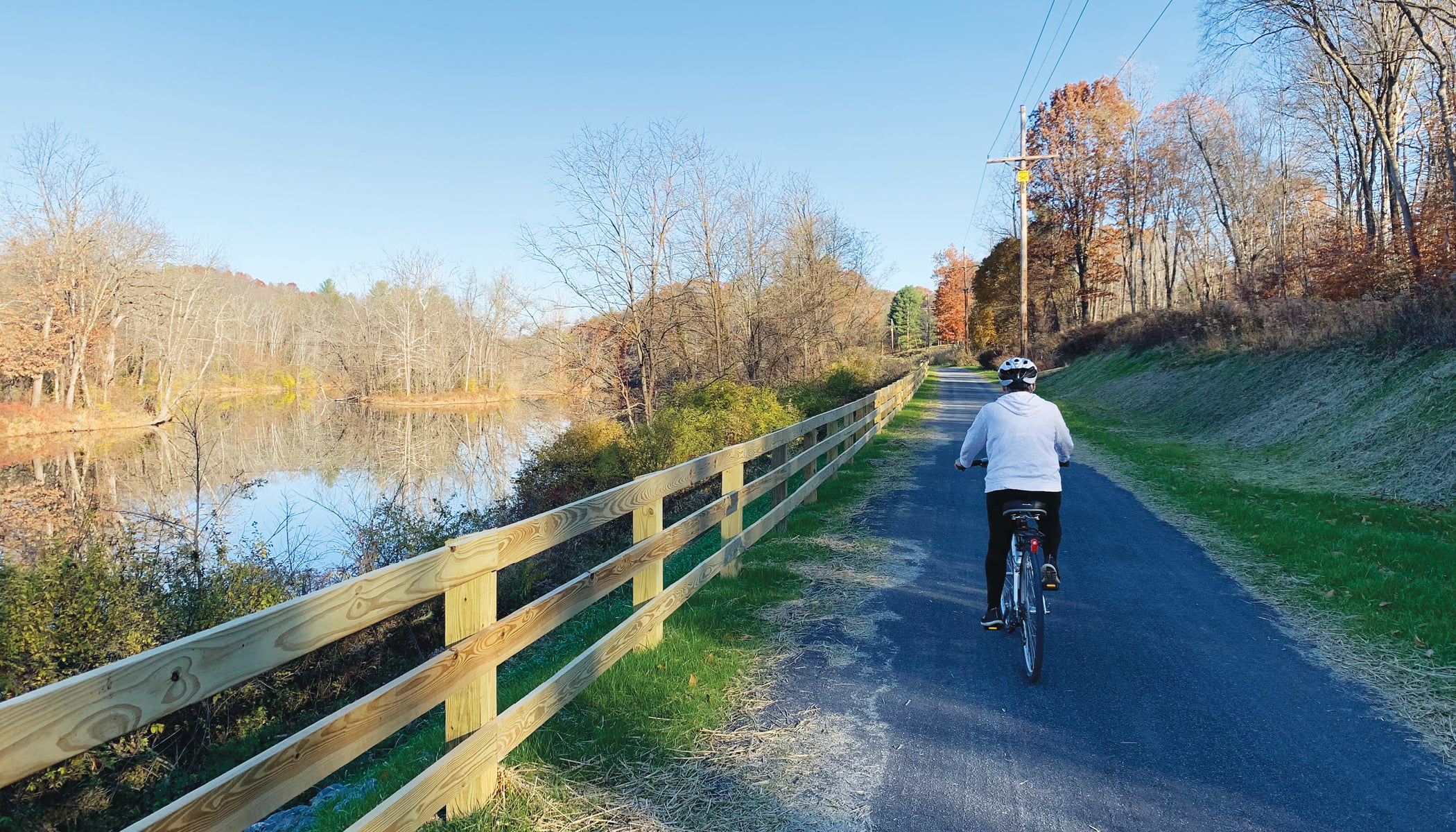 The Manhattan Greenway Trail, which runs from The Battery to Inwood Hill, is a 12.5-mile section that marks the beginning and end of the Empire State Trail. This leg starts at the southern tip of Manhattan, affording views of the skyline, including the Freedom Tower, and continues north along the west side of Manhattan. The Greenway is separated from vehicle traffic and runs through Battery Park City, Hudson River Park and Riverside Park.

One of the most compelling sections of the Empire State Trail spans the Kingston-Rhinecliff Bridge in the Hudson Valley. Opened on February 2, 1957, the George Clinton Kingston-Rhinecliff Bridge stretches 7,793 feet, links Dutchess and Ulster counties, and is named for the “Father of New York State.” George Clinton was born in 1739, died in 1812 and served as governor for 21 years, longer than any other chief executive of the Empire State.

The bridge that bears Clinton’s name, commonly referred to as simply the Kingston-Rhinecliff bridge offers easy access to Kingston in Ulster and Rhinebeck in Dutchess. Kingston is home to Hutton Brickyards, which offers lodging and dining on the Hudson River shoreline. Kingston is also home to the Broadway Theater at Ulster Performing Arts Center, which has hosted concerts by David Byrne of Talking Heads fame. And the historic Stockade District preserves the city’s colonial period history while offering coffee shops, restaurants and shops with modern-day flair. 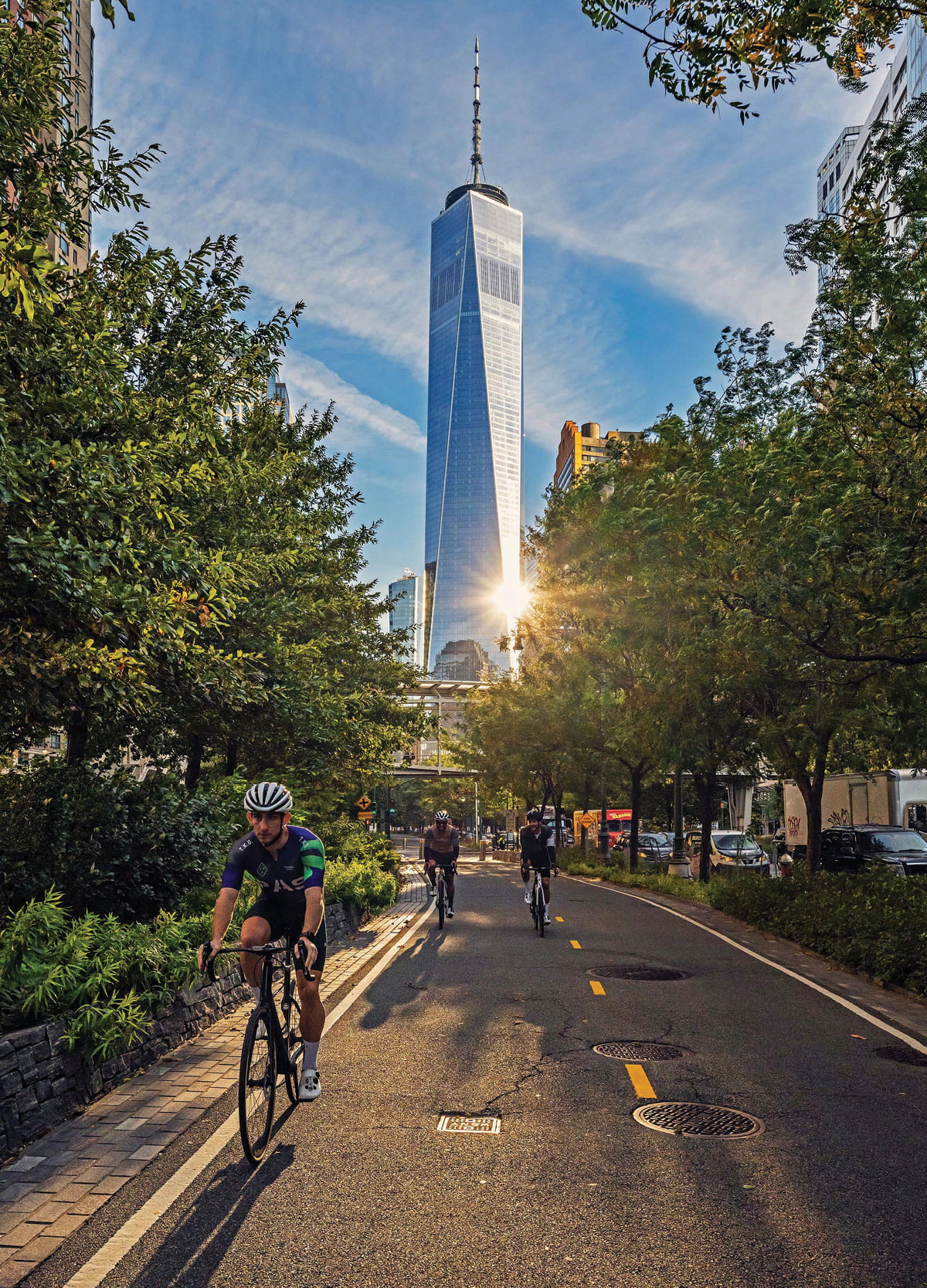 Home to the Beekman Arms, the oldest inn in America, Rhinebeck is also where you can find Samuel’s Sweet Shop, which is co-owned by actors Paul Rudd, Jeffrey Dean Morgan and Hilarie Burton.

But most important is that Rhinebeck, the hamlet of Rhinecliff to be more specific, is home to an Amtrak station that offers easy access to the Empire State Trail.

Board an Amtrak train to Rhinecliff and you will arrive at a station perched on the edge of the Hudson River’s eastern shoreline. Cycle into Rhinebeck for a snack or cup of coffee, and then return to the Empire State Trail off River Road.

Head west toward the Kingston-Rhinecliff Bridge and you will ascend the Empire State Trail as it climbs high above the Hudson. The Catskill Mountains greet you to the west and you can peer down to see the very train tracks on which your journey began. Continue west across the bridge to reach Kingston and, further south, Rosendale, the Rosendale Trestle, New Paltz and sweeping views of the Shawangunk Mountains.

The Rosendale Trestle offers scenic views of downtown Rosendale and the Rondout Creek, and provides easy access to Main Street.

Spanning the Wallkill River on the Empire State Trail and Wallkill Valley Rail Trail between Rosendale and New Paltz is the Springtown Truss Bridge, which was featured prominently in the film “A Quiet Place” and the HBO series “I Know This Much Is True.”

In New Paltz, the Empire State Trail takes you west to Highland, Poughkeepsie and what New York State officials say is the longest elevated pedestrian bridge in the world—Walkway Over the Hudson. The Walkway stands 212-feet above the Hudson River and stretches more than a mile long. Views to the north offer yet another perspective on the Catskills.

The Walkway is a former railroad bridge that opened as a state park in 2009. The Poughkeepsie-Highland Railroad Bridge was built in the late 19th century to link New York and New England, and for decades operated as a major rail corridor. The bridge was abandoned after a 1974 fire. Today it is a pivotal link in the Empire State Trail.

If you choose to cycle north from Rhinebeck, toward the City of Hudson, the Empire State Trail will bring you through the campus of Bard College in Annandale, from which Donald Fagen and Walter Becker of Steely Dan graduated.

North of Bard lies the quaint Village of Tivoli, Clermont State Historic Site and Olana State Historic Site. Though situated at the top of an uphill ride, Olana offers breathtaking views of both the Hudson River and Catskill Mountains. Due north of Olana is the Rip Van Winkle Bridge and its Skywalk, with the City of Hudson and its Amtrak station just a few miles farther.

Keep in mind that all of this encompasses just one leg of the Empire State Trail, but a stretch of rail that includes three Amtrak stations—Poughkeepsie, Rhinecliff and Hudson. 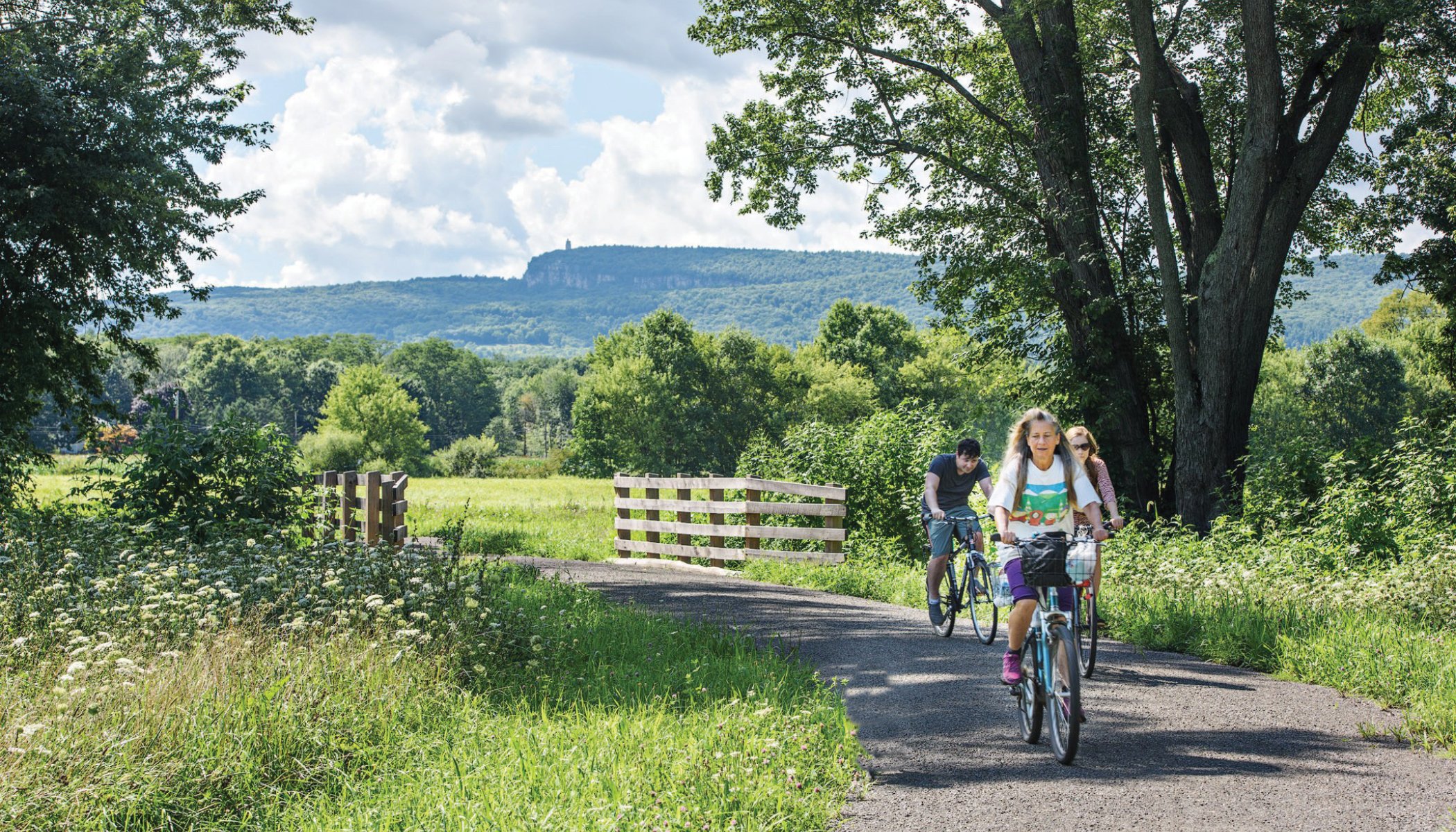 River-to Ridge Trail
Looping You In 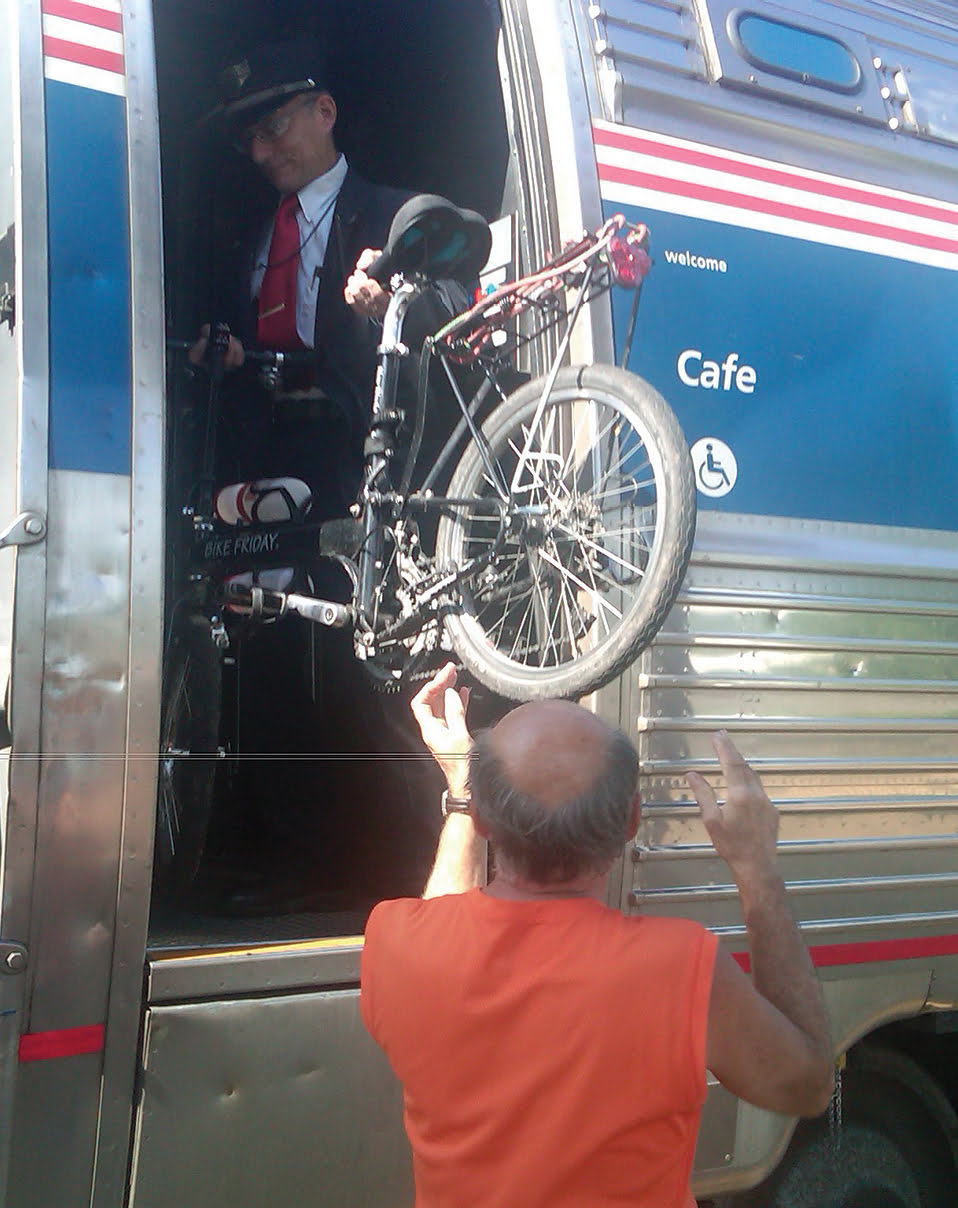 BOARDING A BIKE WITH YOUR TRAIN

“Part of the joy of a journey by train is the ability to explore the stops along the way, and what better way to do that than by bike,” reads Amtrak.com.

Amtrak.com/bring-your-bicycle-onboard has the whole deal:

Insider Tips For Biking With Amtrak By Bill Claytor

Bill Claytor is a resident of the Capital Region and a biking enthusiast. He enjoys taking his bike aboard Amtrak to explore destinations with great biking trails.

Buffalo to Rochester on the EST (76 miles)

Rochester to Syracuse on the EST (94 miles)

Syracuse-Rome-Utica on the EST (61 miles)

Utica to Amsterdam on the EST (65 miles)

Amsterdam to Schenectady on the EST (17 miles)

Schenectady to Albany on the EST (23 miles)

Albany to Hudson on the EST (41 miles)

Hudson to Poughkeepsie on the EST (65 miles)

Poughkeepsie to Van Cortlandt Park on the EST (88 miles)

Van Cortlandt Park to Manhattan on the EST (16 miles)

CLICK BELOW FOR MORE TO DO AROUND NEW YORK 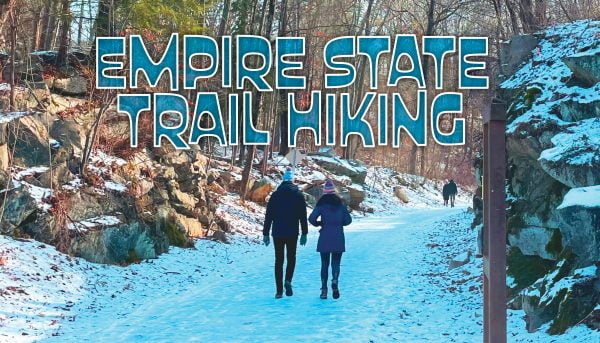 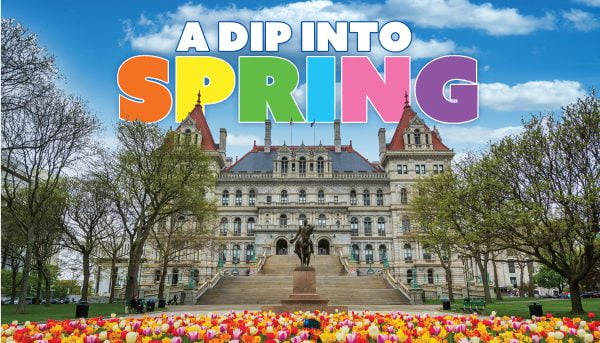 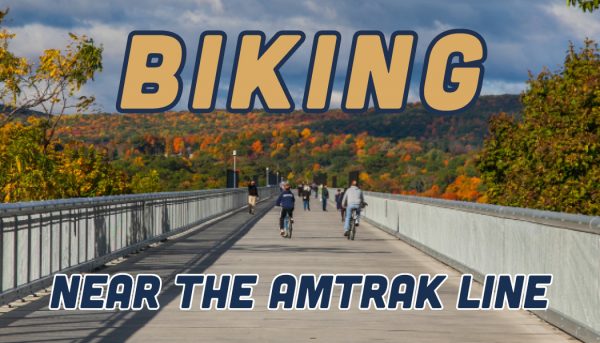