The Queen City on the Hudson

Designed by the same team that crafted Grand Central Terminal, the Poughkeepsie Train Station is a gateway to the history, arts and culinary offerings of the Queen City. Opened in 1918, the station is perched just off Main Street near the Hudson River’s eastern shore.

Consider that President-elect Abraham Lincoln on Feb. 19, 1861, made a brief train stop in Poughkeepsie on his way to his inauguration in Washington D.C. On April 25, 1865, Lincoln’s funeral train arrived carrying the assassinated president on board. 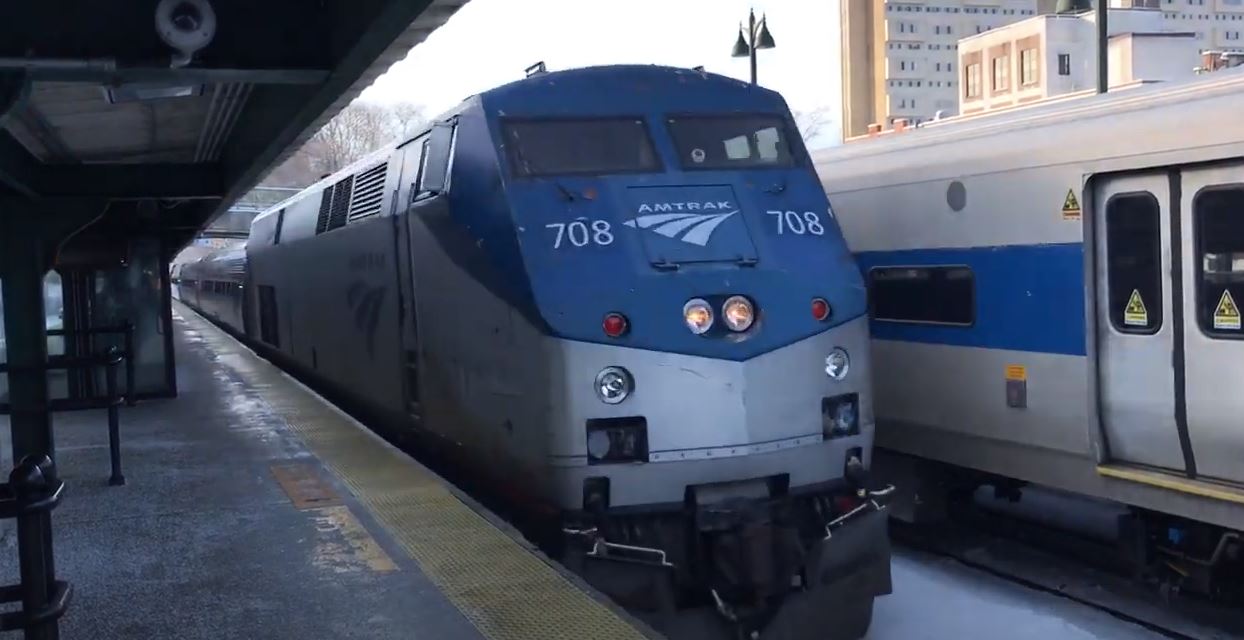 The Poughkeepsie Train Station also offers the opportunity to take in, by foot, the sights, sounds and flavors of a community that is home to a former railroad bridge converted into a 1.28-mile pedestrian span that sits 212 feet above the river. 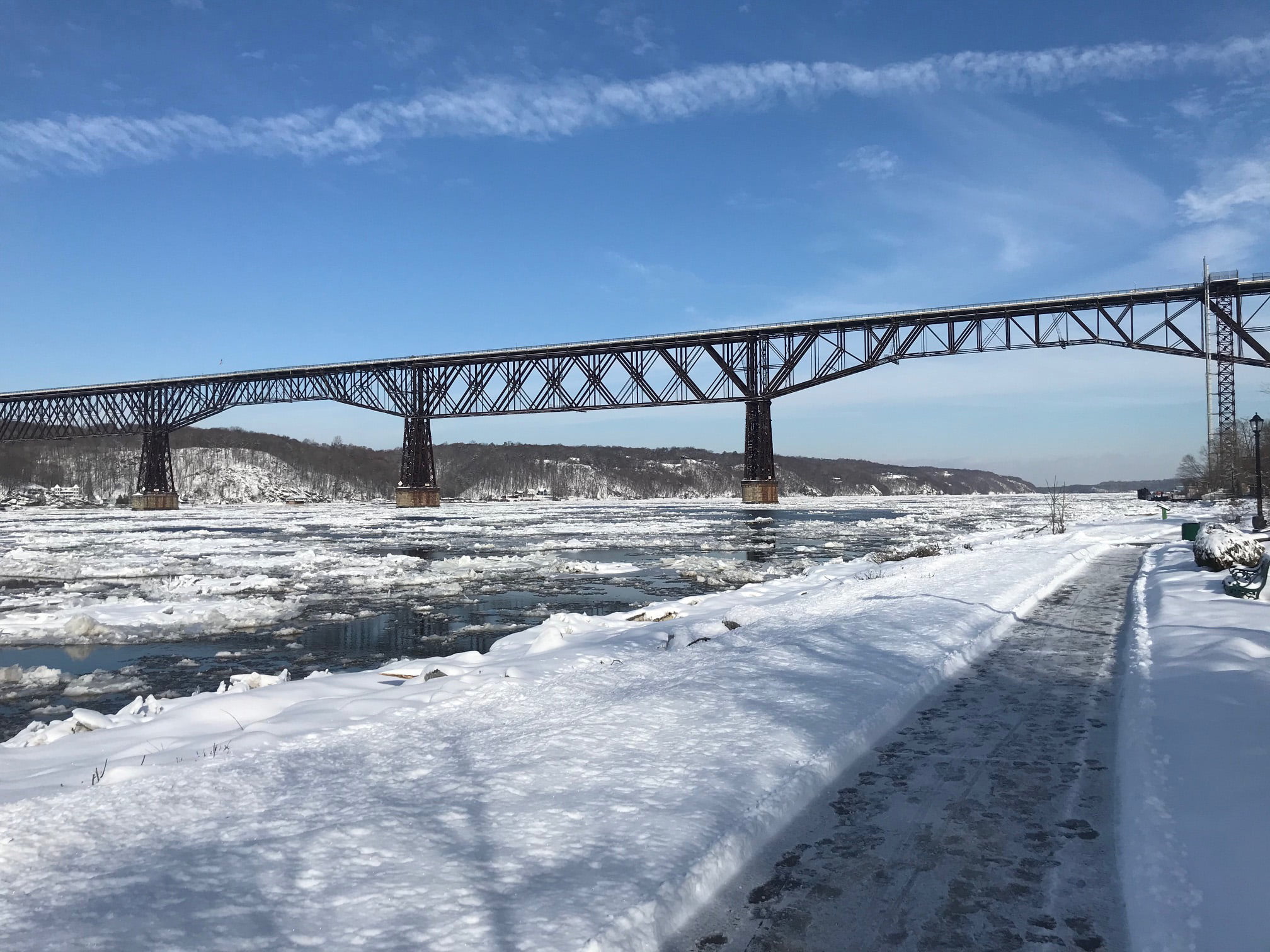 The Poughkeepsie Waterfront on the banks of the semi-frozen Hudson River overlooking the Walkway Over the Hudson nearby.

The Walkway’s 21-story, glass-enclosed ADA-compliant elevator is closed for the winter. However, this vertical mode of transport in better weather offers an expanding view, making it yet another reason to visit Poughkeepsie.

With the elevator closed for the season, the Walkway entrance on Parker Avenue is accessible by a 14-minute, less-than-a-mile uphill walk or roughly six-minute Uber or Lyft ride from the station. You can expend less energy by simply gazing at the Walkway from Waryas Park, which sits on Poughkeepsie’s Hudson River shore, about two blocks west of the train station. A walking path takes you north to Upper Landing Park, where the elevator is located.

Another uphill but none-too-rigorous walk east on Main Street will bring you to downtown Poughkeepsie. The downtown area is home to New York State’s oldest, continuously-operated theater, and the second-oldest newspaper in the nation.

Even on a cold winter day in the midst of a global pandemic, the Bardavon 1869 Opera House on Market Street and Poughkeepsie Journal on Civic Center Plaza offer visual intrigue. Each building boasts a compelling exterior design that complements their roles as historical anchors. Opened in 1869, the Bardavon has welcomed Mark Twain, Frank Sinatra, Carlos Santana, John Legend and Liza Minnelli to its stage. The Poughkeepsie Journal‘s origins date back to New York State’s ratification of the U.S. Constitution in 1788 on the site of the present-day Dutchess County Courthouse. This historical site is another eye-catching building, that sits at the intersection of Market Street and Civic Center Plaza.

Another destination well-worth checking out on your walking tour of Poughkeepsie is the grand home of the U.S. Post Office on Mansion Street, catty-corner from the Poughkeepsie Journal. President Franklin D. Roosevelt, a native of nearby Hyde Park, took great interest in this Post Office and was closely involved in its design. Sweeping, detailed murals in the lobby were his brainchild.

As you make your way up Main Street from the Poughkeepsie Train station, be sure to check out the colossal mural on the Route 9 underpass. A partnership between Arts Mid-Hudson, Poughkeepsie Alliance and the O+ Festival, the mural literally illustrates the strong community fabric that binds Poughkeepsie together. Additional public murals can be found out-of-doors at the intersection of Mill and North Clover streets and Dongan Place; in Mural Square on Main Street, one block east of the Dutchess County Courthouse; and on buildings that ring a Cannon Street parking lot behind the Bardavon.

At this point in your journey, hunger and thirst are likely setting in. When it comes to dining and drinking, Poughkeepsie does not disappoint.

On the opposite side of the parking lot from the murals, 40 Cannon St. welcomes visitors to a range of culinary offerings. These include Cafe 40 & Co, a coffee shop with sandwiches, nibbles and hot drinks; 1915 Wine Cellar, a wine bar with nibbles; the King’s Court Brewing Company; and the Gallery 40 art gallery. One block east, Hudson & Packard on Academy Street serves up authentic Detroit Pizza.

Back on Main Street, Brasserie 292 and Alex‘s Restaurant offer fine food. Two blocks north, on the city’s eastbound Arterial, Mill House Brewing Co. offers beer, lunch and dinner. The jewel in this city’s culinary crown could be Rossi’s Deli on South Clover Street. This legendary lunch spot’s sandwich was ranked the best in New York State for 2019 by BuzzFeed and Yelp.

Near the station, Mahoney’s Irish Pub & Steakhouse offers the fun feel of an Emerald Isle pub inside a building that once housed the Vassar Brewery, a long-ago endeavor of the namesake family of Vassar College.

After paying your bill at Mahoney’s, you can leave the pub through an east exit that spills out into a parking lot shared with the Amtrak Station. The Poughkeepsie Train Station does not offer WiFi, but there are benches; Quik-Trak kiosks; and an ATM.

As you wait for your train to arrive, you can reflect on your visit to Poughkeepsie. Consider your downtown stroll, the history you soaked in and the food and drink you enjoyed. You will hopefully gain a sharper perspective on this Hudson River community, this stop on the Amtrak line, this gateway to Dutchess County and the people who live there.

Dig a little deeper and you will learn that Poughkeepsie, following the burning of nearby Kingston in 1777, served as the capital of New York until 1783.

IBM across decades has maintained a prominent foothold in Poughkeepsie. Actor Mark Ruffalo and actresses Kathryn Hahn and Rosie O’Donnell starred in the Poughkeepsie-based production of HBO’s “I Know This Much Is True.” This production is an example of the Hudson Valley’s regional, booming, multi-million-dollar film and television production industry. Additionally, architect Alfred Mosher Butts of Poughkeepsie invented Scrabble nearly a century ago.

Pre-pandemic, Poughkeepsie was a sought-after destination for live music. The Chance in 1978 welcomed to its stage an unknown British rock trio called The Police, who dazzled the four paying customers in attendance. And Bruce Springsteen, Billy Joel and Willie Nelson have performed at the Mid-Hudson Civic Center, whose exterior has undergone extensive renovations as the building was re-named the Majed J. Nesheiwat Convention Center.

But Poughkeepsie’s enduring spirit has not been slowed down by the pandemic. The Bardavon, The Chance and the MJN as it is now known are gearing up to once again welcome live music fans for performances. And through it all, the good, the bad and the uncertain, that Hudson River Amtrak stop welcomes all as it bids them safe travels, north to Rhinecliff and south to Moynihan Train Hall.