Feast your eyes on some delicious barbecued food that’ll make you want to roar at Dinosaur Bar-B-Que in Syracuse, New York!

After its opening in the early 1920’s in New York City, Dinosaur Bar-B-Que has continuously satisfied its customers with its great food and energetic atmosphere. Following its increase in popularity, the restaurant branched to various locations across New York State. The Syracuse Dinosaur Bar-B-Que was opened in 1988 and has grown to be a hot spot in the downtown area. Since its opening, the restaurant has added two private party rooms with a stage and speaker system, as well as a private balcony overlooking the city. Also, be sure to take your four-legged friends out for dinner too! Bring your pup with you to dinner at any of the restaurant’s outdoor seating areas. Overall, this restaurant has continued to thrive over the years and has become a staple food destination in the Syracuse area!

To learn more about Dinosaur Bar-B-Que and its other locations across New York State, click here to visit their website!

“THE place for BBQ in Syracuse. It’s a favorite of ours for its great live music on the weekends, delicious BBQ and cool decor.”

Experience this unforgettable restaurant via Amtrak to the Syracuse Station in Syracuse, New York—Also, don’t forget to use the New York By Rail 15% discount!

Where to Stay in Syracuse, NY

Looking for a getaway opportunity? Spend the night and experience all that Syracuse has to offer. In addition, take a look at these great hotel options—some offering exclusive New York By Rail discounts! 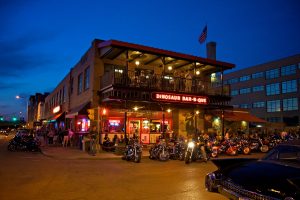