Explore over 22 miles of former railroad tracks on the Wallkill Valley Rail Trail, running through New Paltz and spanning from Gardiner to Kingston.

With thick forestry, sprawling hills and bordered by the Wallkill River, the unpaved stone trail is open from dawn ’til dusk, with no fee for entry. Feel free to walk, run, bike and even ride your horse on the trail.

There are various access points to the former railroad in New Paltz, Gardiner, Kingston and Rosendale. In New Paltz, the most popular trail head is located directly behind Water Street Market along Main Street. There are limited parking locations along the path.

The original railroad the trail currently sits on dates back to the 1860s, with a handful of small stations built on the line. Most of the cargo on the railroad consisted of fruit and milk, but lumber and grain were also transported. Traffic decreased significantly in the early 20th century before the railroad was dismantled in the mid-1980s.

“This was by far the healthiest and most beautiful day trip idea for our long weekend from NYC – completely reachable via public transport.”

Experience this unforgettable attraction via Amtrak to Poughkeepsie Station in Hudson Valley—Don’t forget to use the New York By Rail 15% discount! 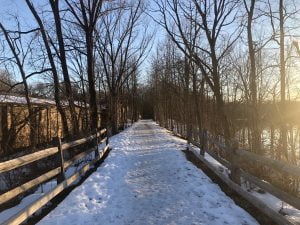