From the scenic coastlines of Long Island to the spectacular sprays of Niagara Falls. Whether you're into adventuring for adrenaline, tracing the trails of history, or basking in the sun along the sea, I Love NY has the perfect getaway for you.

For those who love to get outside on a getaway, the Adirondacks are a gem. ‘Nothing new about that. As the railroads expanded into the region during the 1800s, the Adirondacks became the preferred summer destination for city dwellers who wished to cool off, breathe fresh air, and escape into nature.

Many of the country’s most influential industrial tycoons spent their summers in the Adirondacks, hiking, boating, fishing, and lounging in, you guessed it, Adirondack chairs. By 1892, the New York State legislature officially created the Adirondack Park, to protect its pristine waterways, forests, and peaks, by integrating it into the state’s constitution “…as wild forest lands. They shall not be leased, sold or exchanged, nor shall timber thereon be sold, removed or destroyed.”

Today, the Adirondack region remains a mecca for outdoor adventure thanks to those protections put in place almost 130 years ago. Within the park’s three million acres, one has a choice of over 100 peaks to climb, 46 of them over 4,000 feet. There are also 1,300 lakes and ponds, 30,000 miles of streams and brooks and 1,000 miles of rivers, all of which add to area’s special appeal for outdoorsy folks, like me.

I grew up in Saranac Lake, one of the many villages and hamlets scattered around the Adirondack Park. I frequently travel back to climb a mountain, get an adrenaline rush or quench my curiosity about the natural world. Here are a few of my favorite Adirondack fixes:

The Wild Center, in Tupper Lake, is the most intriguing, interactive nature center I’ve ever visited. From the 10-foot wide eagle’s nest on The Wild Walk, a self-guided treetop tour, I love to peer across the vast forested wilderness, as if I were an eaglet about to fly for the first time. Then I roll around on the human-scaled spider web and thwap special tubes to mimic the sounds of native woodpeckers. Inside the sizeable exhibit hall, I watch otters played in an enormous, glass-walled water tank. Native brook trout fin in another tank beside a waterfall, and big bass swim around a third tank. I even whip up fluffy clouds with my hands in the weather room.

I spent my formative years schussing down the ski trails at Whiteface Mountain, in Wilmington, site of the alpine and mogul skiing events during the 1980 Winter Olympics. However, I no longer need skis to be wowed by Whiteface. During the summer and fall foliage season, the Cloudsplitter Gondola whisks me to the top of Little Whiteface for an entirely different view of the Adirondack High Peaks than what I can see from The Wild Center, one that’s much closer and sometimes above the real clouds! 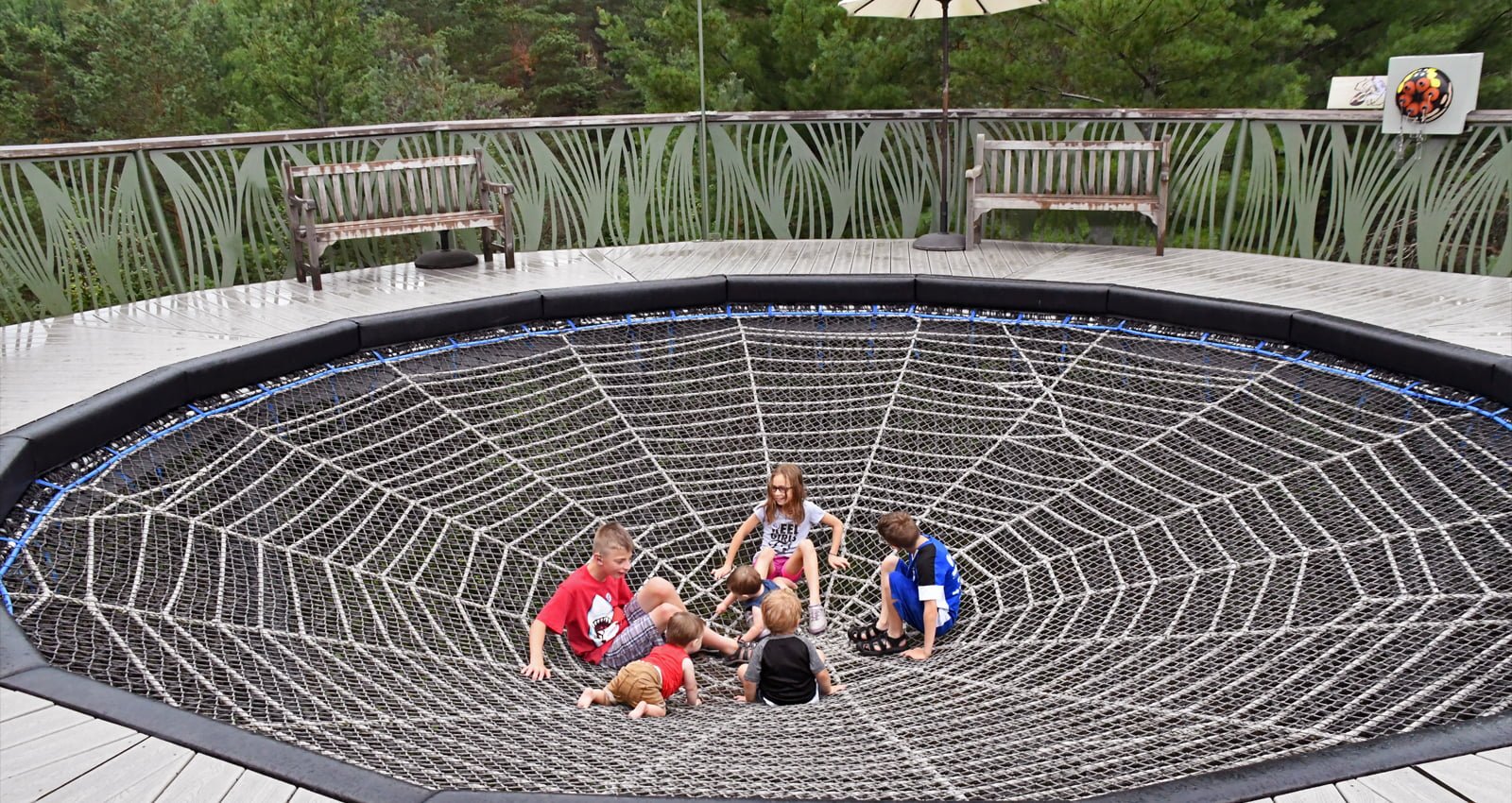 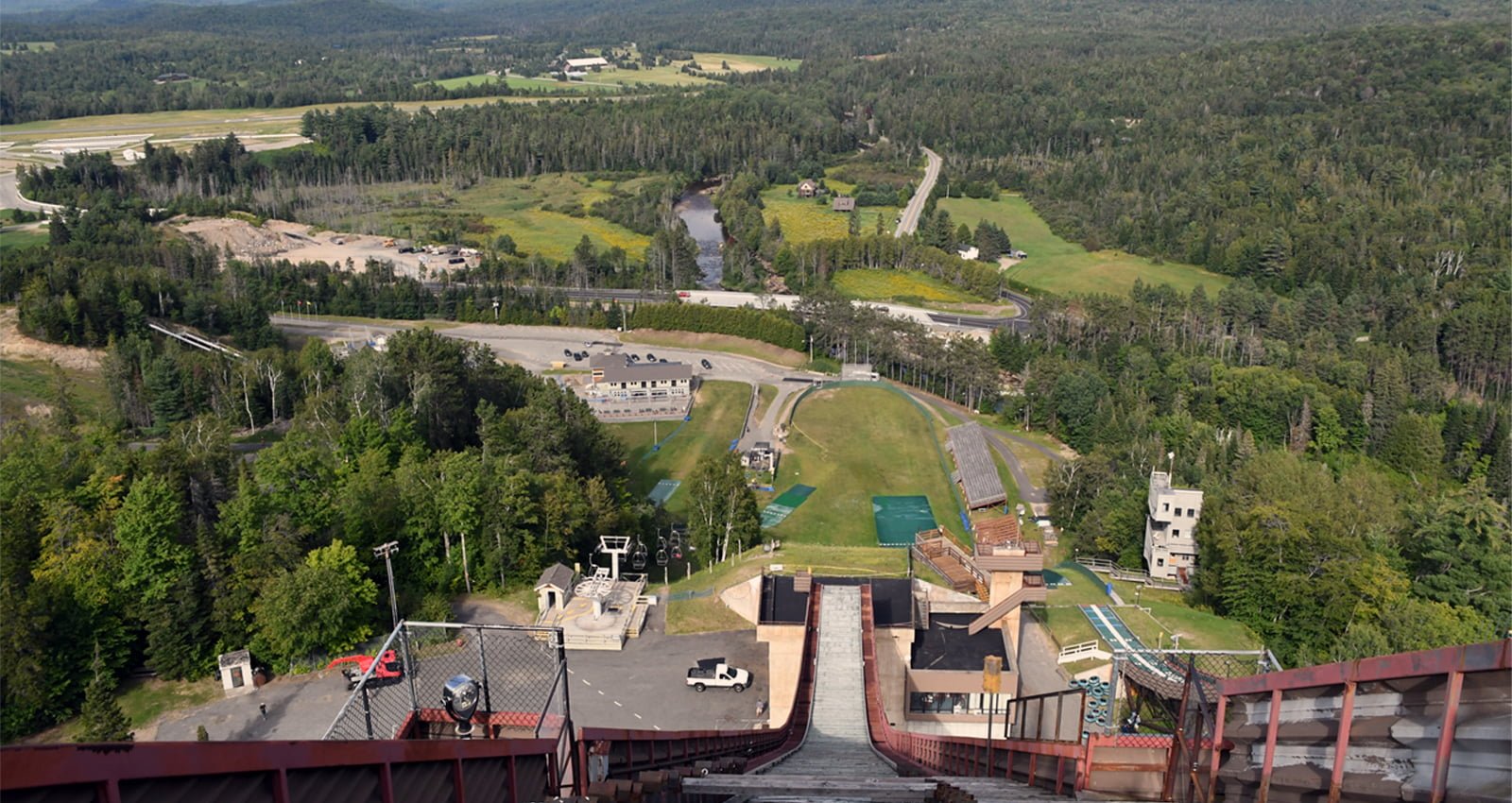 Stand atop the Olympic ski jumps at Lake Placid and dare to look down. | Photo Courtesy of Lisa Ballard

To truly feel surrounded by the Adirondack’s majestic mountains, I lace up my hiking boots and head to a trailhead. Bagging one of the popular 4,000-footers requires an early start, not only because these are long hikes, but also to find a parking spot. One of my favorite hikes is up Wright Mountain, which leaves from Adirondack Loj, the Adirondack Mountain Club’s base camp in Keene Valley. From Wright’s bald summit, I feel as if I can touch the most famous giants in the High Peaks region, including Mount Marcy, the highest mountain in New York State.

As a kid, I knew a few bobsledders but couldn’t imagine riding down the bobsled run. I’ve gotten braver and recently had the chance at the Olympic Sports Complex in Lake Placid. The 1932 track is open to visitors, and it doesn’t have to be winter. With a professional driver in front, the four-person sled barrels down the track, swerving right and left. The G-forces feel as if they will pull me through my seat. At one point, my right shoulder is nearly vertical to the ground. It’s a wild ride, more thrilling than most theme park rides. 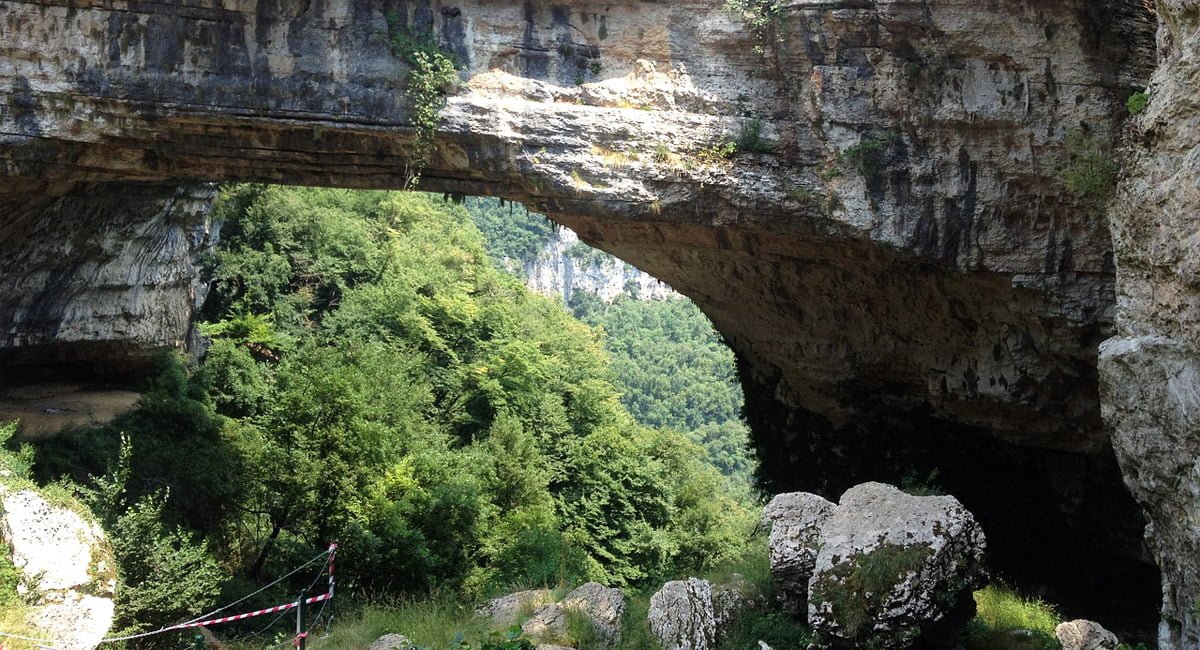 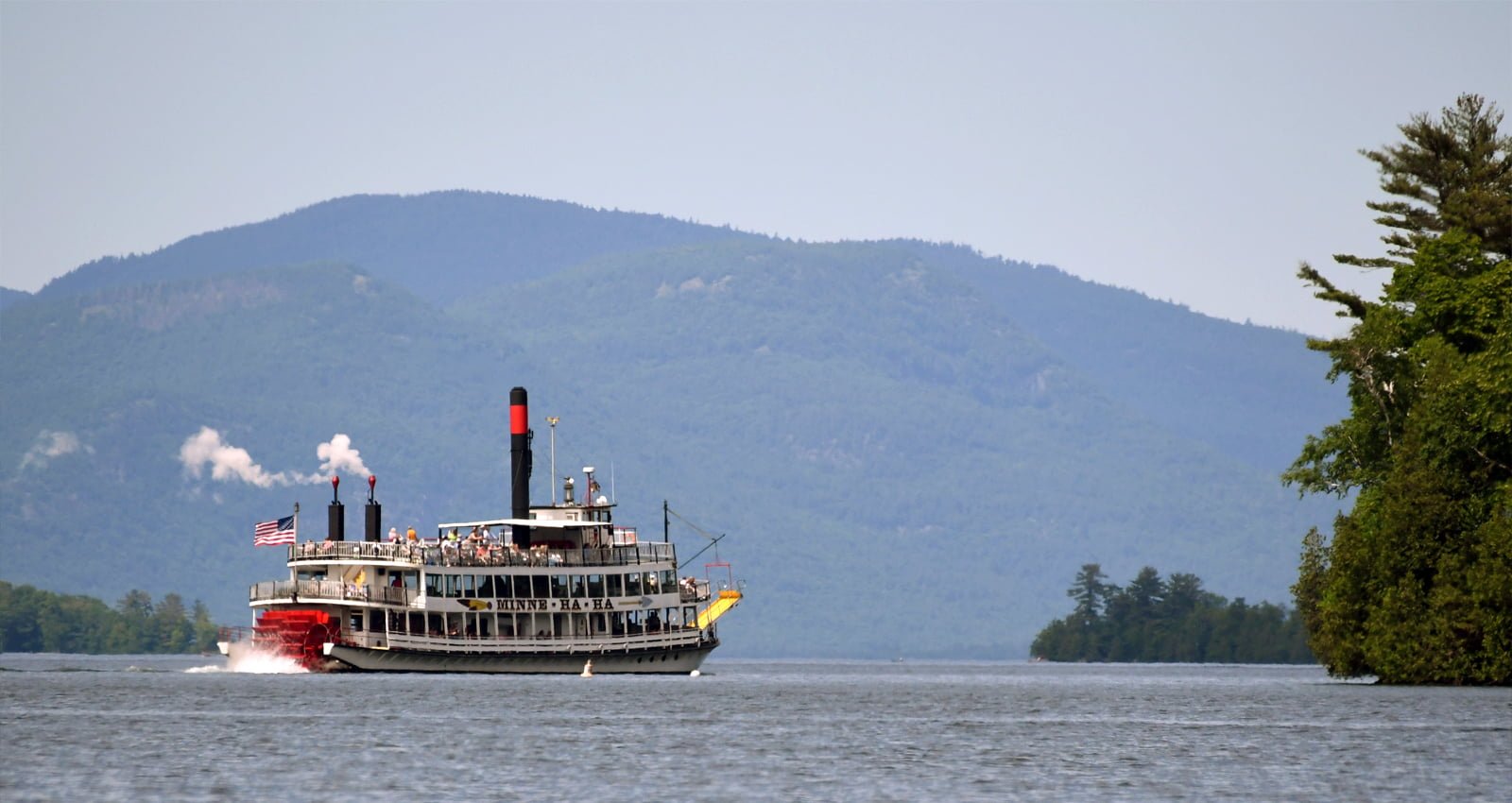 Six Flags’ Great Escape & Indoor Water Park, in Queensbury near Lake George, also has a bobsled among its 130+ rides, though the Comet rollercoaster is my favorite there. This 90-year-old ride, with drops of up to 85 feet, is a whirlwind of gravitational and centrifugal forces, widely regarded as one of the best wooden coasters in the world.

For a different type of adrenaline rush near Lake George, Natural Stone Bridge and Caves Park, in Pottersville, appeals to my spelunking side. Its yawning marble cave entrance, the largest in the eastern United States, provides an awe-inspiring start to the park’s Adventure Tour, a three-hour cave crawl that ends with an underground float back to daylight.

And if I really want to pack in the action, I rope up at the Adirondack Extreme Adventure Course in Bolton Landing, home to the first and largest aerial adventure course in the United States. I can take as much or as little challenge as I want on over 1.5 miles of zip lines, rope bridges, belays and other obstacles up in the forest canopy.

“Going wild” in the Adirondacks means different things to me depending on my mood. Sometimes I really do need to be in the wilderness, hiking to the top of tall peak. Other times, my inner adrenaline junky needs a fixe. Whatever the case, every time I visit the Adirondack Park, I have exhilarating outdoor adventures and always come back for more.

Santa’s Workshop in North Pole NY, where you can visit Santa, Mrs. Claus, and the reindeer all year long, is considered America’s oldest theme park. Even planners from Disney visited when working on Disneyland.

You can skate on the very same ice where, at the 1980 Lake Placid Olympic Games, the US men’s ice hockey team performed the “Miracle on Ice” by defeating the Soviet Union, who had won gold the previous four Olympics.

Thomas Jefferson once proclaimed Lake George to be “without comparison, the most beautiful water I ever saw.” 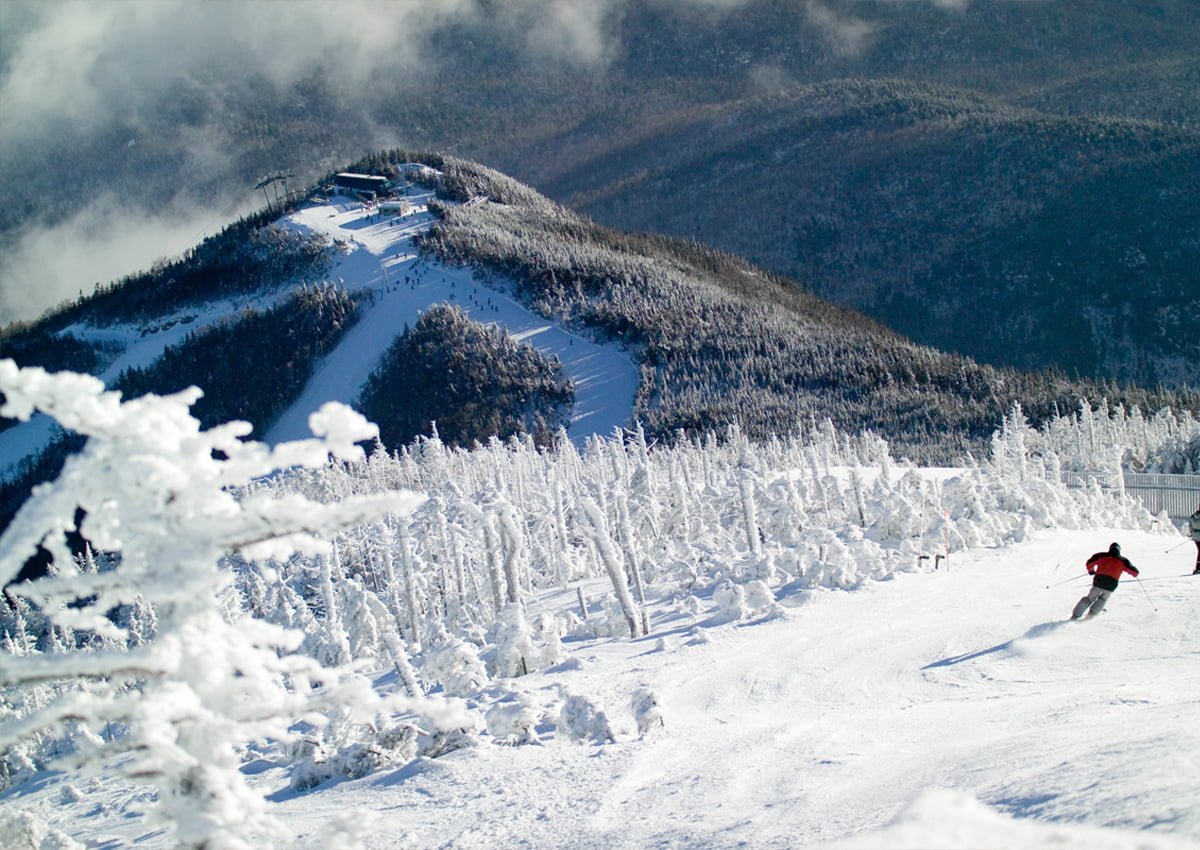 Gain a new perspective on nature while wandering above the treetops at The Wild Center, and meet otters, owls, and more at daily animal encounters.

Get even higher by riding the Whiteface Cloudsplitter gondola to the top of Little Whiteface Mountain.

Visit the Lake Placid Winter Olympic Museum and Hall of Fame to learn about the Olympic Games of 1932 and 1980, then try an exhilarating bobsled or skeleton ride at the Olympic Sports Complex!

Enjoy fine dining and world-class luxury in the town of Lake Placid. Stay overnight in Lake Placid before heading to Lake George. 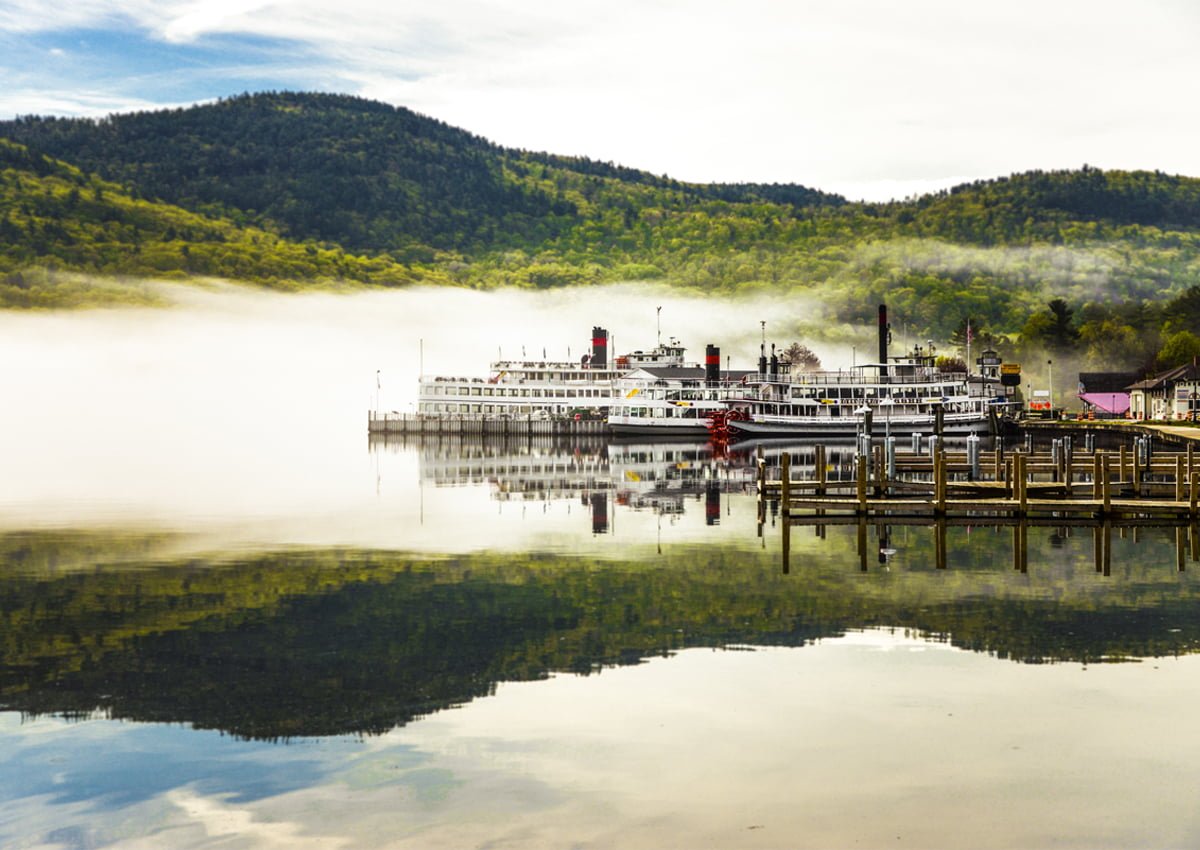 Take in more adventure at Six Flags Great Escape & Splashwater Kingdom, where you can try more than 130 rides.

Cruise pristine Lake George the way people have for more than a century on the Minne Ha Ha with Lake George Steamboat Company.

Explore Natural Stone Bridge and Caves Park, the largest cave entrance in the eastern US, to learn about the geology of the Adirondacks, or mine for gems and fossils.

Spend the rest of the day exploring the picturesque town of Lake George and stay overnight before kicking off the rest of your adventure. 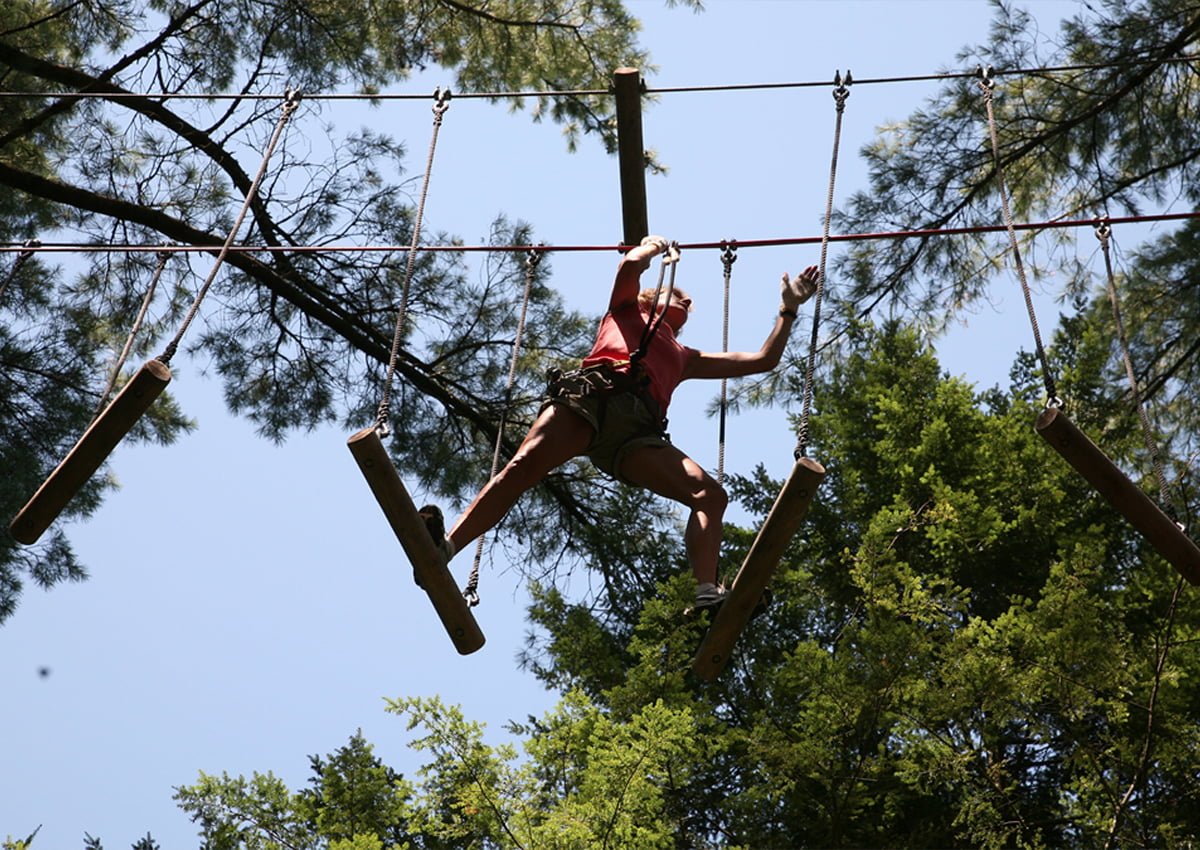 Challenge yourself at Adirondack Extreme Adventure Course, with 15 ziplines and more than 130 obstacles of varying difficulties. 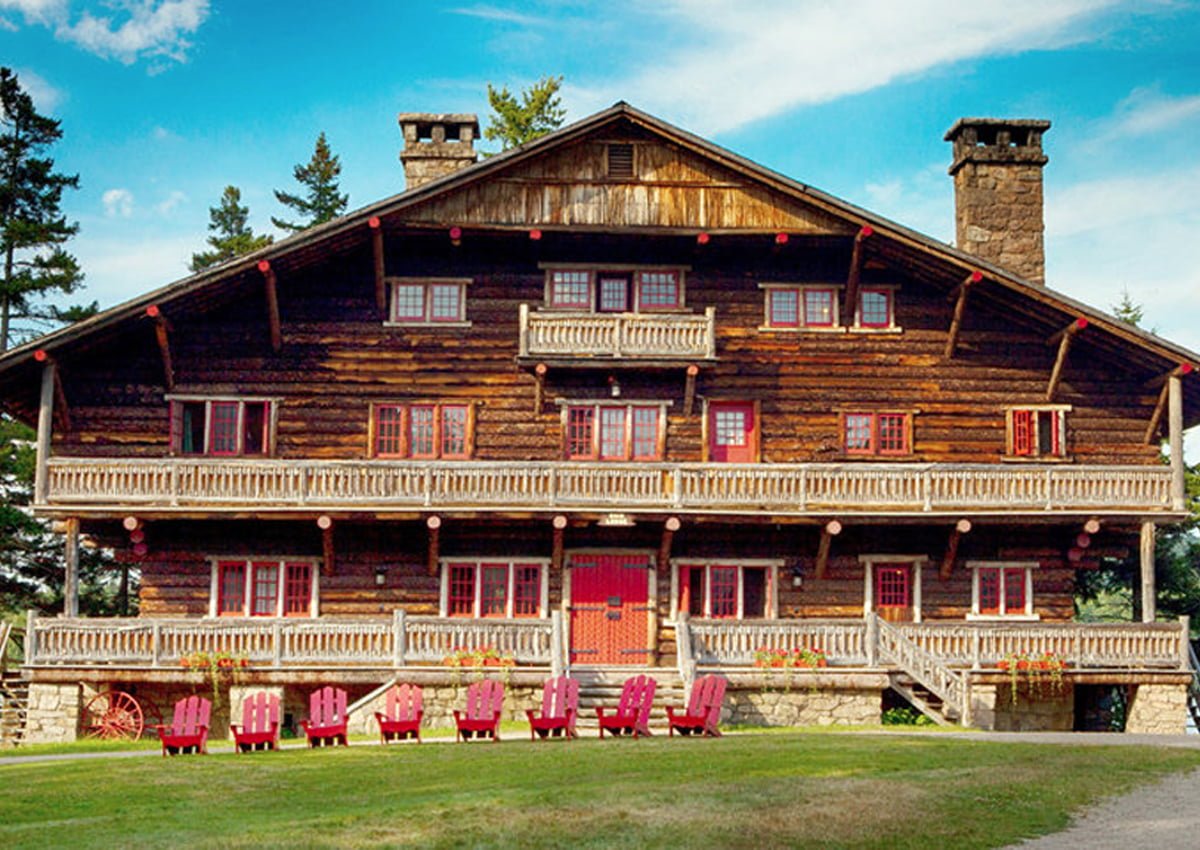 When Gilded Age hosts invited their well-to-do friends to join them in the Adirondacks, they talked of “vacating” the heat of the city for the cool mountain breezes, and the word “vacation” was born. Some of these spectacular retreats have been preserved for visitors, like the Great Camp Sagamore National Historic Landmark.

Hike some of the 46 high peaks of the Adirondacks, ranging from the relatively easy Cascade Mountain to the very challenging Mt. Emmons.

Take Amtrak to Your Adirondack Adventure

Take Amtrak to a number of stations along the eastern side of the Adirondack Park, including Fort Edward-Glens Falls (FED), Whitehall (WHI), Ticonderoga (FTC), Port Henry (POH), Westport (WSP), Port Kent (PRK) and Plattsburgh (PLB). Don’t forget to use Amtrak’s See New York and Save 15% discount!

To go car-free, take Amtrak to WSP or FED, then Amtrak’s Thruway bus service to Lake Placid. Use Lyft, Uber or a local taxi service to reach attractions in proximity to either village.

Special Offer: Get 15% off regular adult rail fares and 50% off children’s fares on Amtrak through ILoveNY.com (Restrictions apply).