A ski resort with the greatest vertical of any lift-serviced mountain in the Northeast that is also home to gondola rides, disc golf, cross country mountain biking, and Saturday night ice shows.

From gondola rides, disc golf, cross country mountain biking, to Saturday night ice shows (just to name a few), Whiteface Lake Placid has a huge array of both on- and off-hill activities. Whiteface Mountain in particular boasts a ski resort with the greatest vertical of any lift-serviced mountain in the Northeast.

There are a variety of programs offered at the Olympic Center for figure skaters. There are opportunities for training for national, regional and international competitions.

Learn the history of the Lake Placid Center in depth at it’s museum through videos, memorabilia from past games, and they frequently display new exhibits.

For more information about the Whiteface Lake Placid Olympic Museum click this link to be directed to their website.

Experience Lake Placid Olympic Center via Amtrak to Westport Station in the Adirondacks—Don’t forget to use the Amtrak See New York and Save 15% discount!

There is a shuttle available that will take you from the Westport Station to Lake Placid. 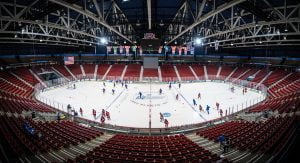