Based in Warren County, NY, Lake George is home to year-round exciting events, attractions and things to do.

See the world and forest floor from above and plan a trip to ADK Treetop Adventures at the Adirondack Adventure Center. Each adventure is two hours long, giving you and your group plenty of time to move through the ropes course and try out a variety of awesome attractions.

Lake George Expedition Park is the home of both Dino Roar Valley, a dinosaur-themed adventure, and Magic Forest, both open seasonally from May through October.

Since 1963, the Magic Forest has delighted families with a variety of unique rides, including the famous train, the Paratrooper, the Tilt-A-Whirl, and Ferris Wheel.

Bolton Landing Brewing Company offers craft beer from one of their 6+ taps as well as light fare from their Bites pub menu. The brewpub officially opened in December 2017 in a newly-renovated 1890s-era home

The brewery features a comfortable bar area, plenty of tables and chairs throughout, and a spacious patio.

The Lake George Music Festival is a week-long event that celebrates everything relating to music – from chamber to full orchestra music to experimental pieces, contemporary works, and beyond, there’s undoubtedly something for everyone.

Jazz lovers bring chairs and blankets to Jazz at the Lake for a weekend-long event of thrilling jazz performances. Sit in Shepard Park, or enjoy the performances from a boat right on Lake George.

The Adirondack Balloon Festival is spectacular sight to see, as dozens of hot air balloons fill the sky with brilliant colors.

Lite Up the Village

Lite Up the Village kicks off the holiday season in Lake George! The Village transforms into a winder wonderland of magic as 3,500 light displays illuminate Shepard Park at once.

“Great place to visit with so much to do and see. Safe and very family-friendly! Awesome places to dine from great outlets, ice cream shops, Great Escapes to live music and sightseeing on a boat or steamboat.”

Explore Lake George from New York via Amtrak to Fort Edward-Glens Falls Station in the Adirondacks—Don’t forget to use Amtrak’s See New York and Save 15% discount!

Get picked up from Fort Edwards Glen Falls Station and taken to your reserved NYTRAIN Enterprise Rent-a-Car. Click here to reserve your car or call the Queensbury office today at: 518-745-5020. 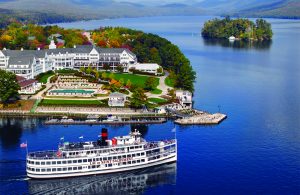