They travel 21,000 miles, through 46 states, the District of Columbia and three Canadian provinces.

They run 300 strong daily, extend to more than 500 destinations and hit speeds of 150 mph.

In one fell swoop they embody a pioneering America and the enduring spirit of a nation that refuses to sit still. It’s all wrapped up in the iconic red, white and blue that speaks volumes across centuries, legacies and generations.

But much of it can be summed up in just two words — “All aboard!” 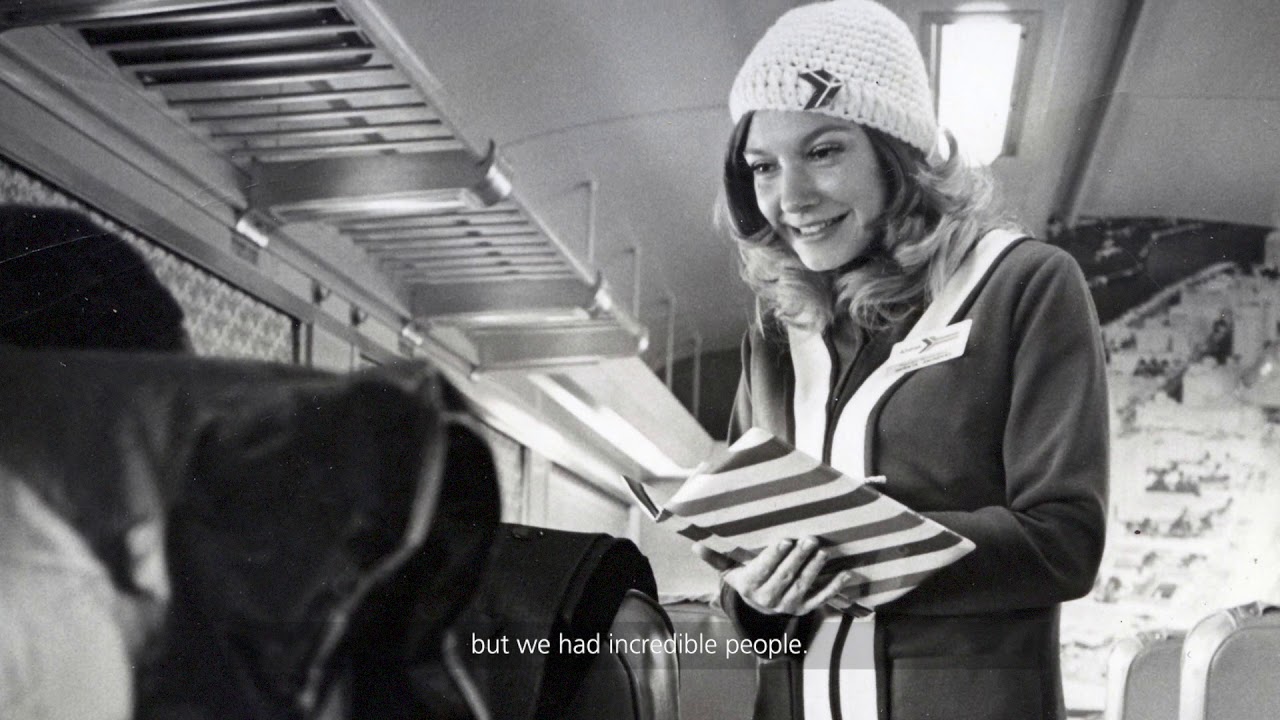 Amtrak, America’s passenger railroad, links points far and wide in the Great 48. From Seattle to Miami and San Diego to Maine, you can find Amtrak stations throughout the country. A bit closer to home, these trains run north from Moynihan Train Hall in Manhattan. They pass through Albany, Utica, Rochester and Buffalo. Prior to the pandemic, Amtrak traveled north to Montreal. Soon enough, Amtrak will once again head northeast from Albany to Vermont.

All of this is coming into sharper perspective as we approach Amtrak’s 50th anniversary. This anniversary will mark a major milestone for a mode of transportation launched May 1, 1971. This date in May marks when the railroad’s first train left New York City for Philadelphia.

The scale of America and New York State, the singular perspective of watching life unfold from an Amtrak window seat, the historic stations and the contemporary cutting edge of 21st century travel all collide when a train roars into or out of a station. Across 50 years, the magnitude of American expression has been unleashed by Amtrak trains. From sea-to-shining sea and north, south, east and west across the Empire State, Amtrak reflects America.

Traveling New York by rail offers insight on one aspect of the Amtrak national network, which relies on rails and ties, locomotives, cabin and dining cars, conductors, engineers and, most importantly, loyal passengers.

Spurred by the reliance on automobiles, expanding popularity of air travel and declining use of passenger trains, Congress adopted the Rail Passenger Service Act of 1970. This legislation created the National Railroad Passenger Corporation. The corporation assumed responsibility for intercity passenger rail service maintained by private railroads. Amtrak launched its service on May 1, 1971, with service on 21 routes serving 43 states.

“The new company,” reads history.amtrak.com, “had to create and operate a refined route system; establish an organizational framework; hire and train employees; upgrade and standardize rolling stock and station facilities acquired from predecessor railroads; develop designs for, and order, modern rail cars and locomotives; institute a comprehensive national reservations system; and craft an advertising campaign to inform the public about its services.”

“Amtrak has nearly 50 years of rich American history, and we’re proud of the efforts we’ve put into intercity passenger rail service,” reads history.amtrak.com. “Since  beginning operations in 1971, we’ve worked ceaselessly to transform a classic form of transportation, preserving those aspects of train travel that are timeless, while modernizing those that are ripe for it. In fiscal year 2019, Amtrak carried more than 32 million customers — proving that America’s longstanding love of travel still embraces our classic and storied mode of transportation in its modern form.”

1983: Steam-heated passenger service ended when the Silver Star  between New York and Florida was converted to Head End Power equipment. That same year, Amtrak took over the popular  Auto Train. The Auto Train transported passengers and their motor vehicles between Lorton, Virginia, and Sanford, Florida.

1988: Amtrak achieves a milestone when, for the first time, it transported more passengers between the nation’s capital and the Big Apple than all the airlines combined.

2000: The first  Acela Express, traveling at speeds up to 150 mph, operates between Washington and Boston.

Alstom has been manufacturing equipment for Amtrak for years, including the Acela train sets.

Amtrak also hired Alstom to produce 28 next-generation, high-speed train sets as part of a program to renew and expand Acela service. With manufacturing at Alstom’s facilities in Hornell and Rochester, New York, the contract is part of a $2.45-billion investment in Amtrak’s busy Northeast Corridor. The new train sets will allow for increased service and faster service, with trains achieving speeds of 186 mph. The current fleet is scheduled to be retired by the end of 2022.

Alstom employs hundreds of people in New York, at its 150 year-old historic operations site in Hornell, between Binghamton and Buffalo; and its engineering development center in Rochester.

2006: The Great American Stations website is launched to foster partnerships with communities interested in station revitalization. Congress passed the Passenger Rail Investment and Improvement Act of 2008, and the American Recovery and Reinvestment Act in 2009. These acts provided $1.3 billion to Amtrak for capital investment. Additionally, they provided significant federal funding to states for improved and expanded Amtrak service and development of high-speed rail service.

2020: “Amtrak” Joe Biden, a former U.S. Senator from Delaware who served as President Barack Obama’s vice-president is elected Commander-In-Chief. Biden, who commuted by Amtrak from Delaware to Washington when he served in the Senate, is by far the nation’s most famous Amtrak passenger. He also underscores the long history linking American presidents to railroad travel.

The vast, all-consuming, forward motion and ever-expanding reach of Amtrak’s national rail network is reflected by the manner in which this railroad binds together an array of towns, cities, communities and regions in New York State.

The ability to board a train at Moynihan Train Hall in Manhattan and travel more than 400 miles to Buffalo, making stops along the way but always returning to Amtrak, underscores the breadth of the Empire State and the pivotal role it plays in defining the American railroad experience. Rail service from New York City to Buffalo remains operational and that affords the opportunity to enjoy the renovated, refurbished and new stations that have emerged along the line. These stations also speak to Amtrak’s growth in New York over the last five decades. These new and upgraded stations include Moynihan Train Hall in New York City; Albany-Rensselaer; Schenectady; Rochester; Buffalo-Exchange Street; and Niagara Falls.

In New York’s Capital Region, Amtrak and the New York State Department of Transportation demolished two Albany-Rensselaer station buildings in 2011 as they added a fourth track. Platform extensions and the replacement of yard signals were completed in 2017.

The new, $27.7 million Buffalo-Exchange Street station is located near the Canalside neighborhood and Key Bank Arena.

In Niagara Falls, service to a new Intermodal station, which houses a U.S. Customs facility, began in 2016.

In Schenectady, a new station built with $20 million in state and federal funding opened in 2018.

Adding layers to the experience and building upon Amtrak’s national foundation are the advancements that America’s railroad has made and the milestones it has marked in the Empire State over the last 50 years.

On December 3, 1967, New York Central Railroad inaugurated the Empire Service when a train bound for Buffalo departed on Track 36 from Grand Central Station in New York City. On Monday, December 4, 2017, the 50th anniversary of that auspicious occasion was marked with a two-hour ceremony at Amtrak’s Albany-Rensselaer Station.

The Empire Service consolidated 11 daily local and long-distance trains out of New York City into eight New York-Albany roundtrips, five New York-Buffalo roundtrips and one additional Albany-Buffalo roundtrip. One of the New York-Buffalo trains continued beyond Buffalo to Chicago. At the Albany and Buffalo stations, connections remained to the one or two remaining passenger trains to Boston, Montreal, Toronto, Detroit, Cleveland and Chicago. Amtrak would eventually assume responsibility for all of it.

Adding layers to the experience and building upon Amtrak’s national foundation are the advancements that America’s railroad has made and the milestones it has marked in the Empire State over the last 50 years.

On December 3, 1967, New York Central Railroad inaugurated the Empire Service when a train bound for Buffalo departed on Track 36 from Grand Central Station in New York City. On Monday, December 4, 2017, the 50th anniversary of that auspicious occasion was marked with a two-hour ceremony at Amtrak’s Albany-Rensselaer Station.

The Empire Service consolidated 11 daily local and long-distance trains out of New York City into eight New York-Albany roundtrips, five New York-Buffalo roundtrips and one additional Albany-Buffalo roundtrip. One of the New York-Buffalo trains continued beyond Buffalo to Chicago. At the Albany and Buffalo stations, connections remained to the one or two remaining passenger trains to Boston, Montreal, Toronto, Detroit, Cleveland and Chicago. Amtrak would eventually assume responsibility for all of it.

Also noteworthy in New York was the launch of The Adirondack, which five decades ago was a new addition to Amtrak’s early, barebones, national network. Linking Albany-Rensselaer to Montreal, The Adirondack was also one of the first state-sponsored Amtrak services. The rail service got under way on August 5, 1974 and in the process celebrated the rich heritage of New York’s Adirondack Mountains, which sit to the north and east of the rail line.

The Adirondack pre-COVID-19 had offered stops in Schenectady, Saratoga Springs, Ticonderoga and Plattsburgh, among other stops. But The Adirondack has been sidelined and out of service because of the pandemic.

All of this speaks volumes about the pivotal role that New York State has played in Amtrak’s 50-year history, and the role it continues to play as Amtrak remains a cornerstone of the nation’s transportation experience. And all of this encapsulates how Amtrak, in New York and beyond, embodies our nation’s industrial spirit, its humanity, its path forward, its compass pointing toward the future. That, at its very essence, is the story of Amtrak and the last 50 years of rail travel in the U.S. of A.

So there you have it. America. New York State. Amtrak. 50 years. And a tip of the hat to 50 more. Congratulations, Amtrak, on your golden anniversary.