The Adirondack heads north along the shoreline of Lake Champlain. | Photo Courtesy of Kent Patterson

From Manhattan Island to the Île de Montréal, the Adirondack travels one of the most scenic train routes in the world. Over its 381 miles, this once-daily Amtrak train passes through the scenic Hudson River Valley and along Lake Champlain with Vermont’s Green Mountains rising from across the water. It passes by several historic sites, West Point Military Academy and popular tourist destinations like Saratoga Springs and Ticonderoga.

The Adirondack began its life in 1971 as one of the first state-sponsored Amtrak services, a new addition to the Amtrak’s early, barebones, national network. Before Amtrak, the Delaware & Hudson and New York Central railroads operated two New York–Montreal trains, the daylight Laurentian and overnight Montreal Limited. However, like dozens of other trains nationwide, neither made the cut into the pared-down Amtrak system.

Another difference from today is that the Adiondack ran as a section of New York-Buffalo Empire Service train, with the Montréal-bound cars coupled and uncoupled at the Albany-Rensselaer station.

On August 5, 1974, the Adirondack had its first day of service, a ceremonial run that according to the New York Times, “was greeted by bands, bunting, flag-waving crowds and orating politicians”. The VIPs included then New York State Transportation Commissioner Raymond T. Schuler and Governor Malcolm Wilson, who made a pitch for a $250 million state rail bond. The bond passed later that year, triggering a major upgrade of the New York-Albany-Niagara Falls “Empire Corridor”. 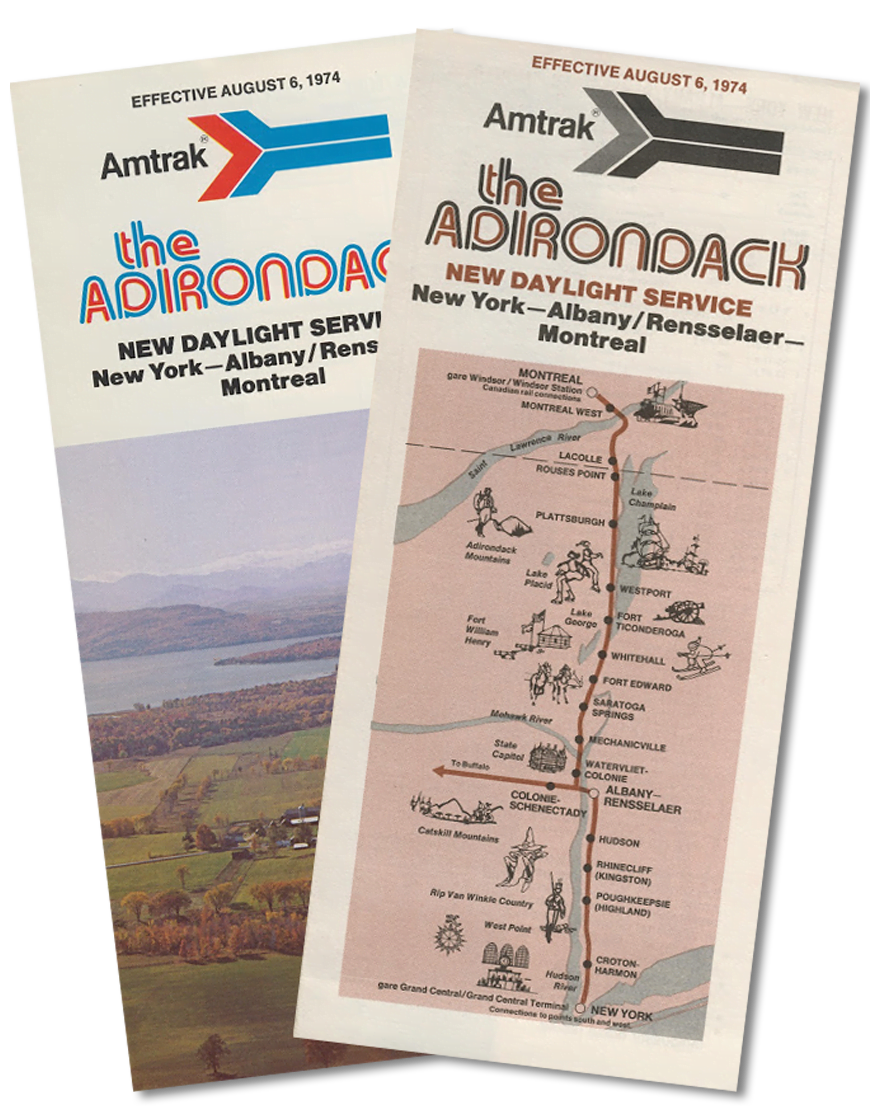 The New York Times continued, “…As the nine‐car train made its way north along the Vermont border, towns that had been without passenger service since 1971 turned out in colorful force to welcome the Adirondack back to the Albany‐Montreal corridor. The hoopla included… a salute from speedboat enthusiasts on picturesque Lake Champlain… [At Saratoga Springs] about 1,000 people were on hand, including the town’s Bethesda Black Knights Bugle and Drum Corps, folk singers from Cafe Lena, horseplayers and public officials. Costumed characters from the current production of the musical, Pinocchio, danced on the station platform, and a young man in Revolutionary War dress was symbolic of the nearby Saratoga battlefield… [Plattsburgh] outdid them all with a schoolboy swing band, a display of ancient automobiles at the station and a crowd of 700 to 800 people to welcome back ‘The Train’.”

The first incarnation of the Adirondack was unique. Short of cars, Amtrak and the NYSDOT contracted with the Delaware & Hudson Railway (D&H), the freight railroad north of Albany, to provide the locomotives and coaches. The railroad also received a $3.2 million investment from the state to upgrade its tracks, repair locomotives and coaches and reopen several rail stations for passenger service.

Despite being an Amtrak train, the D&H ran the Adirondack as if it were its own train, down to the tablecloths, menus, and chinaware which displayed the railroad’s logo and blue and yellow corporate colors. It provided the engine crews, conductors, dining car staff and coach “hostesses”. In addition to coaches, the D&H offered dining and dome cars first leased from Canadian Pacific and then later provided by Amtrak.

Another difference from today is that the Adirondack ran as a section of a New York-Buffalo Empire Service train, with the Montreal-bound cars coupled and uncoupled at the Albany-Rensselaer station.

Now, the Adirondack runs solo as its own train, though locomotives are still switched, and additional New York-Albany coaches are sometimes added in Albany.

The initial route of the Adirondack was also slightly different. The train skipped Schenectady by running up the D&H line from Albany to Mechanicville before returning to the current route south of Saratoga Springs. With the construction of a new downtown Schenectady Station, using the bond money supported by Governor Wilson on the Adirondack’s inaugural run, the train switched to its current route in October 1977.

Amtrak was not entirely happy with the bold approbation of one of its trains by the D&H. In March 1977, Amtrak replaced the D&H trains with new, state-of-the-art Rohr RTL “Turboliner” trains. With big windows, the new gas-turbine trains provided a great view to passengers of the passing scenery. Later, after the retirement of the Turboliners in the mid-1990s, the current Amfleet equipment became the standard for the Adirondack. 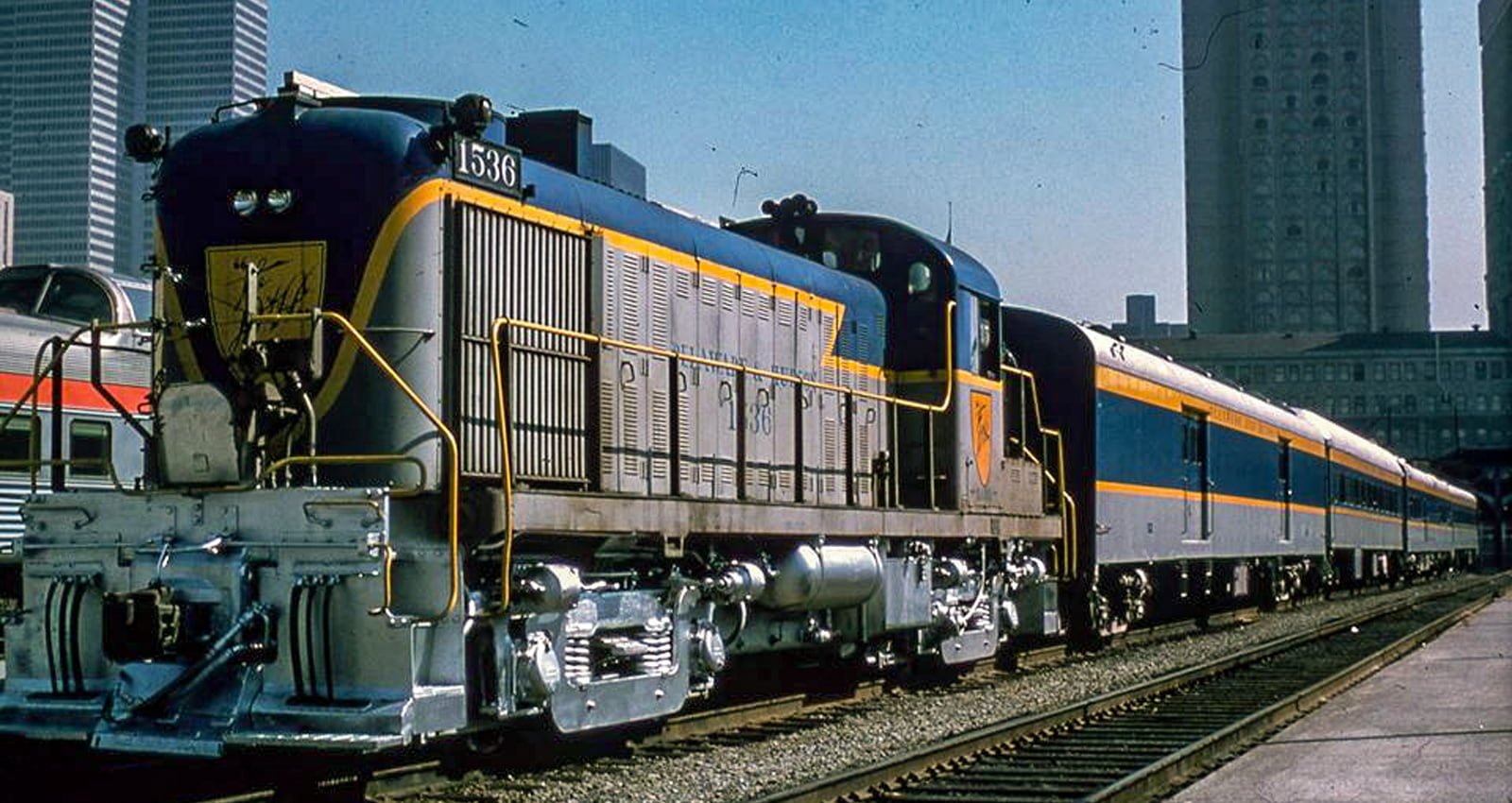 Looking to future, Amtrak hopes to eliminate the lengthy border and customs stop at Rousses Point by opening a new joint USA-Canada preclearance border inspection facility at Montreal Central Station. This will not only be more convenient for passengers but also reduce travel time.

As of 2019 and in one form or another, the Adirondack has run daily for 45 years, thanks to the support of New York State and the dedication of the railroad workers, who have ensured the safety and comfort of generations of passengers making the trip between two great global metropolises through some of prettiest countryside that can be found in the Amtrak system.