If you're feeling especially competitive this year, make your way to Yankee Stadium and watch the Bronx Bombers play their rival team, the Red Sox. Make sure you wear Yankee paraphernalia to ward off all those rival fans sporting red!

There’s nothing quite like the experience of watching the Yankees win at their home field followed by hearing Frank Sinatra’s New York, New York over the loudspeakers. Whether you are a dedicated fan or not, witnessing one of America’s favorite pastimes in Yankee Stadium, home of the 27-time World Series Champions, is not something that can be easily forgotten. From the roar of the Bleacher Creatures to the satisfying taste of ice cream in a helmet-shaped cup to the crowd singing Take Me out to the Ball Game along with the organ during the seventh-inning stretch, this unique experience will have you planning your next trip to the stadium.

The Yankee Stadium where the team currently plays was opened in 2009. The previous stadium, which opened in 1923 and was altered and renovated throughout its history, closed in 2008. The previous stadium is where Babe Ruth, Lou Gehrig and countless others made history, yet today’s stadium pays homage to its past and also celebrates new achievements. Visitors can immerse themselves in the history of the Yankees while at the stadium by visiting Monument Park, the New York Yankees Museum or by taking a tour.

Before the game, be sure to check out the New York Yankees Museum to view historic memorabilia from some of the greats. The Baseball Wall is the highlight and centerpiece of the museum with over 850 baseballs signed by players, coaches, managers, and radio and television broadcasters. Also in the museum are several world series trophies, jerseys worn over the years and other historic and current objects special to the Yankees. Visitors can get even closer to these objects through the Hands on History Tour, where fans can hold artifacts such as a bat used by Babe Ruth.

In addition to Yankees games, Yankee Stadium holds a baseball camp in the summer with special opportunities involving past and present players. Yankee Stadium not only hosts baseball-related events but also holds trade shows, fundraisers, conferences, graduations, and weddings, as well as other sporting events including college football games.

“With many amenities, several food options, breathtaking scenery and beautiful architecture, it doesn’t get much better than Yankee Stadium! There is plenty to do around the park, and with terrific hospitality, you feel right at home!”

Experience this unforgettable attraction via Amtrak to Penn Station in New York City. From Penn Station, walk one block east to 34 St. Herald Sq. and take the B or D trains to 161 St. Yankee Stadium. Don’t forget to use the New York By Rail 15% discount!

Did you know the Metro-North goes directly to Yankee Stadium? Board an Amtrak train and transfer to a station on the Metro-North’s Hudson Line! The journey ends at East 153rd Station in Bronx, New York, making it an accessible way to reach the stadium and watch the game. 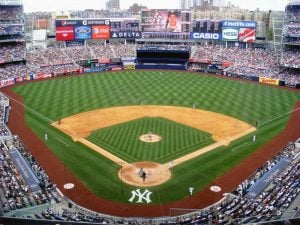 If you're feeling especially competitive this year, make your way to Yankee Stadium and…