Shea’s Performing Arts Center has made it their mission to restore and maintain Shea’s Buffalo Theatre. Shea wants present and future generations to enjoy the center for many years. Since opening its doors, there have been many great performers that have graced the stage at Shea’s including George Burns, Frank Sinatra, The Marx Brothers, and Bing Crosby, among others. The theatre also features the Western New York Entertainment Hall of Fame with inductees Lucille O’Ball, Buffalo Bob, and Christine Baranski, among others, whose portraits grace the Petit Lobby.

Don’t miss out on the amazing shows to come this year!

Enjoy Shea’s Performing Arts Center via Amtrak to Buffalo-Exchange Station in Buffalo—Don’t forget to use Amtrak’s See New York and Save 15% discount!

Get picked up from Buffalo Station and taken to your reserved NYTRAIN Enterprise Rent-a-Car. Click here to reserve your car or call the Buffalo office today at: 716-884-6666. 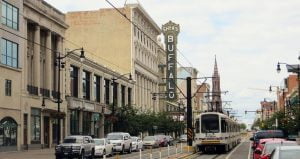 Shea's Performing Arts Center is considered one of the finest movie palaces around today.…