Have you ever wanted to experience eating the best burritos in the country, as voted by Food Network in 2019? Look no further than Mexicali Blue, an award-winning Mexican restaurant with locations not just in New Paltz, but in Wappingers Falls.

Since opening in 2003, Mexicali Blue offers up authentic Mexican cuisine and “is one of the highest-rated Mexican restaurants in the NY,” according to their website.

Enjoy a wide selection of quesadillas, including the Mango Maple Chicken, burritos such as the Pulled Pork Burrito, enchiladas such as the Chile Arbol and so much more. Vegetarian options are also on the menu, such as the Portobello Summer Squash Burrito! You can take a look at the full menu here. In 2019, the Food Network voted the BBQ Short-rib Burrito as the best in the United States at the Wappingers Falls location. The menu at Mexicali Blue is clearly an attraction in and of itself.

Want a dinner party with some authentic Mexican cuisine? Mexicali Blue also has you covered, offering catering options at both of their locations.

They’re open from 12 p.m. to 8 p.m. daily, so take a taste of some of the most admired Mexican food in the nation! While in the area, you may want to check out New Paltz’s other attractions, read here to learn about some of New Paltz’s best locations.

“This spot has extraordinary service as well as delicious menu. One of my favourite places around here. The drinks and food served quick and the rates were affordable.”

Experience this unforgettable attraction via Amtrak to Poughkeepsie Station in Hudson Valley—Don’t forget to use the New York By Rail 15% discount! 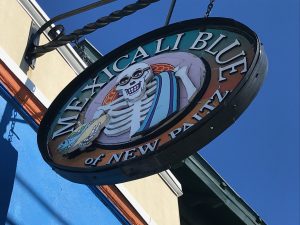