The Buffalo St. Patrick's Day Parade will bring together family and friends to honor Saint Patrick and the Irish community in Buffalo as well as throughout the country. 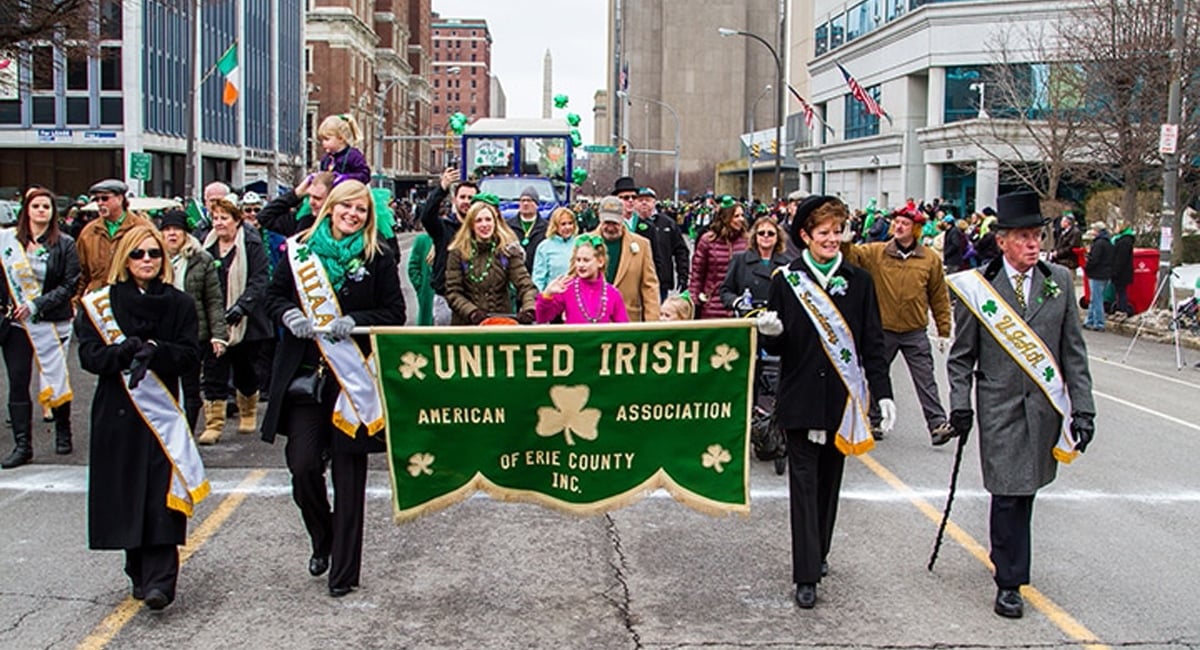 The 2022 Buffalo St. Patrick’s Day Parade will be marching down Delaware Avenue at 2 p.m. on Sunday, March 20th. Lasting two hours, the day will bring together family and friends in a religious, patriotic and civic event as it honors Saint Patrick and the local and national Irish communities. The theme of this year’s Buffalo St. Patrick’s Day Parade is “Hail to Saint Patrick – God Bless America – Support our Troops and First Responders”. The United Irish American Association (UIAA) welcomes all residents of Western New York to be a part of this historic event. As a result, the parade draws people of all nationalities to celebrate along with Buffalo’s large Irish-American population.

The day kicks off with a 10:30 a.m. mass celebrated by Fr. David Richards at Saint Joseph’s Cathedral before the march begins. After the mass, parade participants including Irish dancers, bands, civic organizations and others will line up near the McKinley Monument before marching in the procession. Anyone who is interested in marching in the parade can apply with this form. In the past, the parade received international recognition from the magazine Ireland of the Welcomes published in Dublin, Ireland. The parade welcomes people and families of all ages—free of admission, to participate in the festive day. 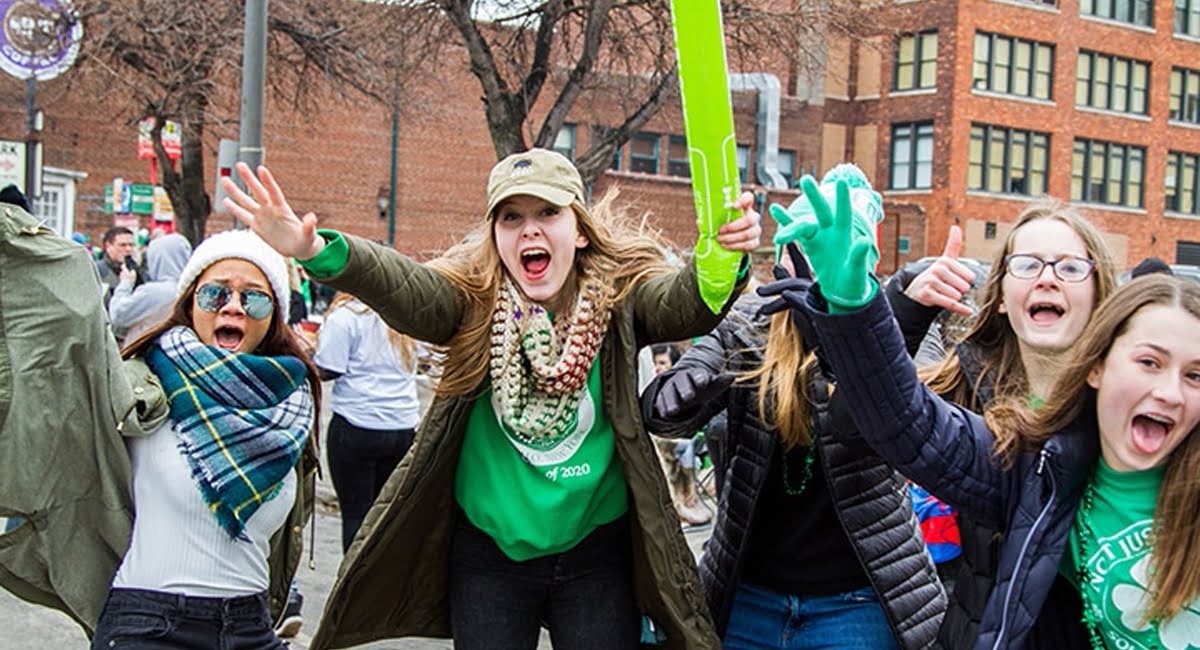 Those who attend the parade dress up in a sea of green. | Photo from Buffalo St. Patrick’s Day Parade 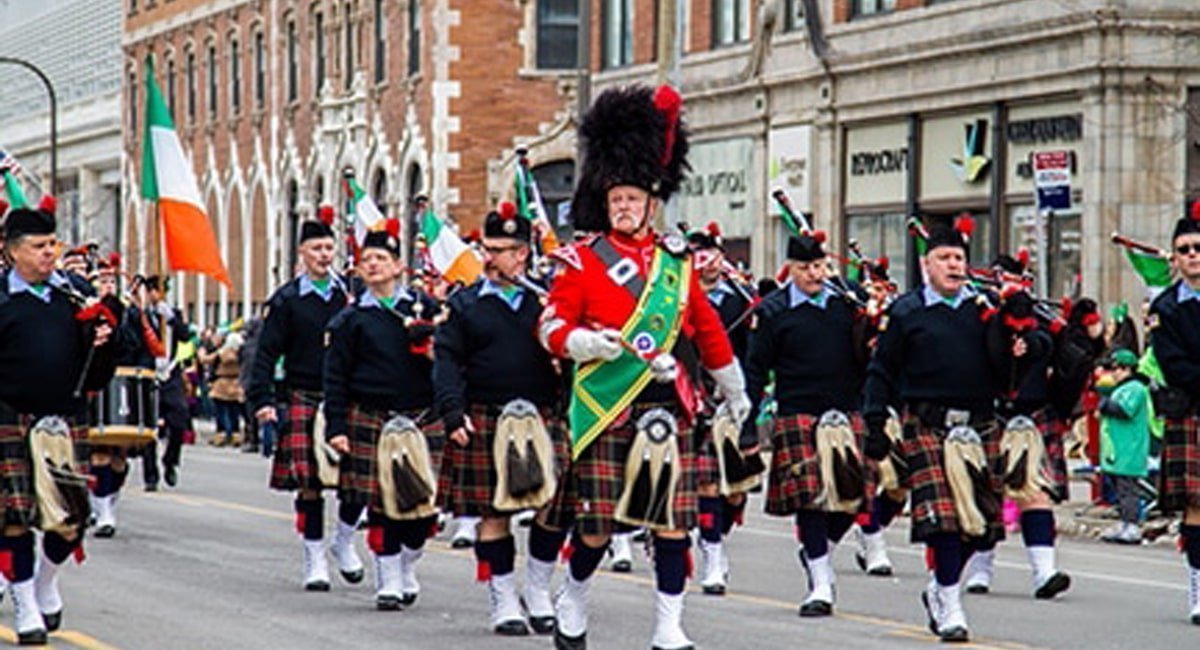 Attending the Buffalo St. Patrick’s Day Parade is a tradition for the McGuinness family. Patrick’s parents were born in Ireland and he enjoys celebrating his heritage annually with his community during the parade. Patrick started this tradition as a sign carrier in the parade during his childhood years. The Grand Marshal continued to express his Irish-American pride when he organized and built prize-winning floats in the Buffalo Saint Patrick’s Day Parade for many years as a blood donor recruiter.  Later he became a division marshal and then was elected to the executive committee of the UIAA.

Things to Do in Buffalo

Wondering what else there is to do in the city of Buffalo? This Western New York city is filled with fun activities, parks and restaurants that’ll keep you busy during your visit. Check out the Buffalo Wing Trail, a foodie trail paying homage to the alleged birthplace of Buffalo Wings! This trail takes you on a journey to multiple restaurants, bars and pubs that serve delicious wings from classic Buffalo to Peanut Butter & Jelly. If you’re visiting in September, you won’t want to miss out on the annual National Buffalo Chicken Wing Festival. Interested in the arts? Visit the Richardson Olmsted Campus for architecture and history, the Albright-Knox Art Gallery and Frank Wright sites throughout the city.

Attend the parade via Amtrak to the Buffalo Exchange Street Station—Don’t forget to use the Amtrak See New York and Save 15% discount! The station is 4.8 miles away from Delaware Avenue, making it an easy and convenient option to get to the event.

Get picked up from the Buffalo Exchange Street Station and taken to your reserved NYTRAIN Enterprise Rent-a-Car. Click here to reserve your car or call the Buffalo office today at 716-884-6666.