Unearth the unexpected at Penn Dixie Fossil Park and Nature Reserve, where guests have the opportunity to find - and keep!- fossils left over from an ancient undersea environment that existed 380 million years ago.

At Penn Dixie Fossil Park and Nature Reserve in Blasdell, N.Y., less than 10 miles south of Buffalo, guests can turn back time by digging for and unearthing fossils of creatures dating back to the Devonian period 380 million years ago. Guests are provided tools for digging and the park’s trained staff will help guide you in your journey to the past.

The 54-acre park is known especially for its plethora of trilobite fossils, extinct arthropods that once swan freely in the sea that now makes up North America and were hunted by armored fish, sharks and the first ammonites (predatory squid in round, armored shells). Ranked as the number one fossil site in the U.S., the Penn Dixie Fossil Park and Nature Reserve is sure to be an experience you really won’t find anywhere else.

The Penn Dixie Fossil Park and Nature Reserve is sponsored by the Hamburg Natural History Society, a nonprofit organization founded in 1993 to preserve the quarry once excavated by the now-defunct Penn Dixie Cement Corporation. In 1995 the Town of Hamburg bought part of the quarry and deeded it to the HNHS under conditions they would rid it of decades-worth of illegal garbage dumping and eventually utilize the site for science education.

Now, Penn Dixie Fossil Park is a global geological cornerstone that receives over 15,000 visitors a year, many of whom come from around the world to see for themselves the treasures buried just beneath its surface.

From April to November Penn Dixie offers guided group and school tours led by trained staff and volunteers who cover everything from Earth’s geological time scale  and extinct life to lessons in erosion/disposition and, of course, fossil collection.

The Penn Dixie Fossil Park and Nature Reserve is open daily from 9 a.m. to 4:30 p.m. during the summer until the final day of the season in mid October. Find rates and make a reservation online at penndixie.org.

“A fun, inexpensive & educational way to enjoy the outdoors!”

Experience this unforgettable attraction via Amtrak to Depew or Exchange Street Station in Buffalo—Don’t forget to use the New York By Rail 15% discount! 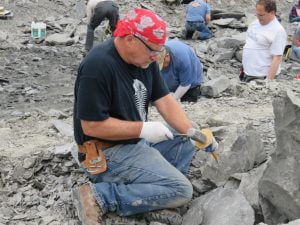 Unearth the unexpected at Penn Dixie Fossil Park and Nature Reserve, where guests have the…