At the Michigan Street African American Heritage Corridor, history, food, art and culture combine to offer visitors a comprehensive look at this nationally and internationally recognized Buffalo neighborhood, home to some of the most significant movements, moments and people that helped shape African American history.

Although a relatively young initiative, the neighborhoods have been making their mark on Western New York- and the world- for centuries. Michigan Street’s very own Baptist Church was once the last stop on for fugitive slaves on the Underground Railroad before crossing over to Canada for freedom and served as a place where anti-slavery and reform movements could meet, a beacon and safe haven for the community. On the next block sit the Nash House, home to the Baptist Church’s legendary Rev. J. Edward Nash, who was instrumental in bringing branches of the Urban League and NAACP to Buffalo and served the neighborhood until his death in 1957. The Heritage Corridor’s festivals, cultural events, creative programming and community outreach initiates draw crowds from all over to witness for themselves the history, character and cultural expression that brings this neighborhood to life.

Visitors have the option of touring any of the four anchor organizations the MSAAHC houses: the Colored Musicians Museum Club and Museum, Michigan Street Baptist Church, Nash House, and the WUFO Radio station.

To view individual and group ticket prices or book a tour at one of MSAAHC’s four anchor sites, visit their website at www.michiganstreetbuffalo.org

Experience this unforgettable attraction via Amtrak to the Exchange Street or Depew Stations in Buffalo—Don’t forget to use the New York By Rail 15% discount! 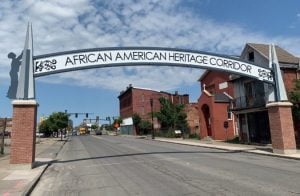