With an intimate, rustic, live jazz venue, The Falcon is known for its delicious American fare and live entertainment.

The Falcon began in 2001 with Tony Falco, he became an art & music promoter that formed Falcon Music & Art Production, Inc. He created an atmosphere in a factory he had purchased and transformed into a respectable venue for multiple genres of music. Eventually, they pivoted to The Falcon “pub-beneath-the-club.” The Falcon became a music scene through the efforts of its owner and is now much more than a location, it is a part of the musical culture for many artists. The scene includes live music, gorgeous outdoor spaces and local New York food for all to enjoy.

The Falcon welcomes everyone to visit with no cover charge and no minimum. They feature live music by extraordinary musicians and even have a donation platform to go directly to the musician that performs. The Falcon’s long-awaited “pub-beneath-the-club” (The Falcon Underground) recently opened its New York Taproom + Beer Garden. With breathtaking views over the magnificent Marlboro Falls, the scene includes live music, gorgeous outdoor spaces and New York-sourced food and libations. The Falcon provides a gastro-pub menu cultivated by chef James Cundiff.

The bar specializes in a vast array of beautifully crafted, small-batch New York beers, ales, wines and spirits. The menu is based on the freshest local, Hudson Valley and New York produce, and includes pizzas, appetizers, salads and desserts!

A terrific place to listen to some music, have a good drink, and eat some good food!

Take Amtrak to The Falcon

Experience The Falcon via Amtrak to Poughkeepsie Station—Don’t forget to use the New York By Rail 15% discount!

Get picked up from Poughkeepsie Station and taken to your reserved #NYTRAIN Enterprise Rent-a-Car. Click here to reserve your car or call the Poughkeepsie office today at: (845) 485-2222. 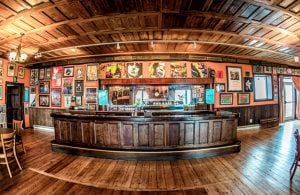 With an intimate, rustic, live jazz venue, The Falcon is known for its delicious American…