Misuta Chows takes what everyone knows about a restaurant, and completely flips the script.

It is definitely more on the unconventional side, but worth the trip to Buffalo just to see it.

Misuta Chows started as an idea for owner Johnny Chow, off of a concept that he saw in Japan. Chow had travelled the world playing bass in his band and has been to Japan on multiple occasions. The restaurant is inspired by Tokyo’s yokochos (sidestreet alleys). Yokochos in Japan usually hold small restaurants or pubs, and are considered some of the best places to look for a quality meal.

Chow’s restaurant encompasses that. With two bars, an open kitchen and countless arcade games for guests to use, patrons have more than enough things to keep them busy and entertained while eating a quality and affordable meal.

The artwork of the building speaks to a style that is both street and modern. Some of it has been acquired by Chow, while others have been painted by different artists. The murals pay tribute to some of Chow’s favorite musicians, like David Bowie, The Misfits and Black Sabbath.

The decorations of the building are a bit more traditional, with Japanese lanterns hanging from the ceiling, kimonos on display and tapestries.

The menu uses locally sourced, fresh ingredients to cook with. They have a 16 beers on tap and also make cocktails.

The building Misuta Chow’s resides in is two floors, which allows for a lot of space, and more importantly, a lot of different arcade games. Some games include Pacman, Frogger, Tetris and various pinball machines.

People can even rent “pods” of six different arcade games. These pods are rented by the half-hour, starting at $10.00 for the first hour, then $5.00 for every subsequent hour. Pods allow guests to eat food and play some of their favorite games.

“Food, arcade games, amazing drinks and a pink staircase. What more could you ask for! This is such a cool place to take your kids or to go for drinks with your friends.”

Experience this unforgettable attraction via Amtrak to Depew Station in Buffalo—Don’t forget to use the New York By Rail 15% discount! 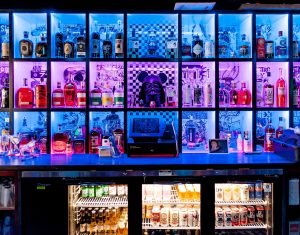