If you’re a hockey fan, there’s no better place to be in Western New York other than the KeyBank Center. The stadium is home to NHL’s Buffalo Sabres. Completed in 1996 to replace the aging Buffalo Memorial Auditorium, it hosts not just the Sabres, but the National Lacrosse League’s Buffalo Bandits and loads of concerts.

The arena’s 19,070 seat capacity for hockey games is an homage to the Sabres’ first season in 1970! It’s located right on the edge of Lake Erie.

The hockey arena may not be the oldest sports venue, but it has plenty of history, especially in consideration of the Sabres. Outside of the main entrance, you can find a statue of the famed “French Connection” line that led the Sabres to playoff glory in the 1970s. Overhead is a covered walkway with images of previous Sabres greats, including Dominik Hasek and Chris Drury, plastered along the sides of it.

Getting hungry? There’s plenty of delicious food and drinks to enjoy that are associated with the KeyBank Center. Some of the most popular eateries include the Anchor Bar, which is home of the buffalo-style chicken wing, Bacchus Wine Bar & Restaurant and Pearl Street Grill and Brewery. No matter where you’re eating, if the restaurant is listed as a KeyBank option, you’re in for a treat.

The KeyBank Center is a fantastic venue for concerts as well. Several famous artists host their concerts and tours here. Some of the popular musicians include Justin Bieber, The Weeknd, Rage Against the Machine and Eric Church. You can also enjoy comedy shows and festivals. The venue truly has something for everyone when it comes to entertainment.

“I’ve been to Key Bank Center many times for several different kinds of events. Its clean and well managed. Entering the arena is easy. Getting through security has never been a problem. They are very organized.”

Take Amtrak to the KeyBank Center

Experience this unforgettable attraction via Amtrak to Buffalo-Exchange Street Station in Buffalo—Don’t forget to use the New York By Rail 15% discount! 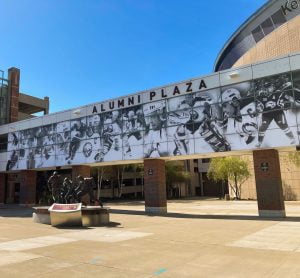