Get your gears turning with over 363 miles of car-free cycling and limitless options to view "The Canal that Built America!"

Considered to be a national treasure, the Erie Canal is one of the US National Parks. The 524 mile-long canal connects with hundreds of miles of lakes and rivers across New York State, connecting the Great Lakes with the magnificent Hudson Valley and with five waterways in Canada. But don’t be overwhelmed by its size, Erie Canal Bike Tours has it covered with plenty of tour options to chose from to make your ride just your kind of perfect!

An Adventure for Everyone

Still have training wheels on, or haven’t biked in a decade? No problem! The various offerings for bike touring the Erie Canal accommodates any age and ability, breaking down each tour into categories of hill difficulty, average daily miles, and overall difficulty level.

Fully supported group tours include Canal Towns of the Erie, Cycle Touring 101, Canals, Waterfalls & Wine Country, and The Historic Erie. A perfect tour for families and the laid-back cyclers out there, Canal Towns of the Erie begins at the majestic Niagara Falls and extends down the Erie Canalway Trail for a total of 130 miles over the course of seven days.

If you don’t have seven days to spend, you can still enjoy the quick getaways Erie Canal Bike Tours have to offer. The Weekender Rides are perfectly suitable for those with minimal time or who just want to escape for a weekend. For an extra buzz, cycle along the breath-taking Cayuga Lake shoreline with the Finger Lakes Wine Bike Tour, stopping every few miles to sample award-winning wines of the Finger Lakes region. Don’t get too tipsy though, it’s a six hour-long trip covering 15 miles.

Bike and gear rental is only available to customers booked on tours.

Experience the scenery of the Erie Canal via Amtrak to Syracuse Amtrak Station in Syracuse —Don’t forget to use Amtrak’s See New York and Save 15% discount!

Amtrak allows passengers to carry on a collapsible bicycle that must be smaller than 34” X 15” X 48.” If you take the Lake Shore Limited train, you may check a bike as luggage. The bike must weigh 50 pounds or less and be a maximum of 70” X 41” X 8.5,” with a maximum tire width of two inches. Reservations are required.

Rent a car with Enterprise! Pick up your reserved NYTRAIN Enterprise Rent-a-Car right at the Syracuse Amtrak Station. Click here to reserve your car or call the  office today at: 315-423-0022. 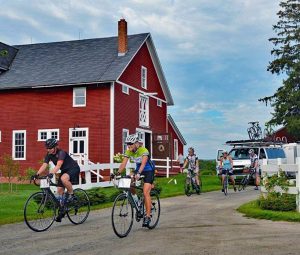