Did you know that President Franklin Delano Roosevelt and First Lady Eleanor Roosevelt resided in New York State? The former president and first lady lived in the city of Hyde Park, nestled in the Hudson River Valley within close proximity to the towns of Poughkeepsie, Wappingers Falls and Rhinebeck. Just in between Rhinebeck and Poughkeepsie, Amtrak is conveniently located nearby at Poughkeepsie Station and Rhinecliff-Kingston Station. The town of Hyde Park is home to historic sites like Vanderbilt Mansion National Historic Site, Franklin Delano Roosevelt Home and Library and most importantly, the Eleanor Roosevelt National Historic Site, otherwise known as Val-Kill.

According to nps.gov, “Franklin and Eleanor entertained friends, state visitors, the press, and their associates in the tranquil and relaxed atmosphere of Val-Kill.” The former First Lady’s home hosts many of her prized possessions as well as the original furniture of the home. Aside from being a historic site, Val-Kill is a beautiful and quaint spot to visit, especially during the spring and summer months.

Tour the grounds and explore the park and various trails.

“Beautiful spot to walk around. There are a few nice hiking trails. There are a few places to sit and relax as well. When the flowers are in bloom it’s beautiful. The grounds are well maintained. It’s a great place for an easy walk.”

Experience this unforgettable attraction via Amtrak to Poughkeepsie Station in Hudson Valley—Don’t forget to use the See New York and Save 15% discount! 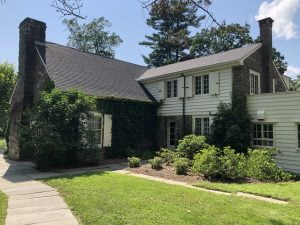