Visit the Central Park Zoo to see snow leopards, red pandas, and other exciting animals in the care of the Wildlife Conservation Society.

The Central Park Zoo is a small 6.5 acres, but big on features. This historic wildlife sanctuary in the southeast corner of Central Park has a surprisingly diverse array of species.

Founded in 1895 by the New York Zoological Society which is now the Wildlife Conservation Society (WCS), the Central Park Zoo is part of the society’s goal to “advance wildlife conservation, promote the study of zoology and create a first-class zoo.” It is one of five zoos that the WCS maintains in New York City. The others are the Bronx Zoo, Queens Zoo, Prospect Park Zoo and New York Aquarium.

Exhibits at the Central Park Zoo

What’s in the Central Park Zoo? Snow leopards, for starters. These elusive, Himalayan cats can jump up to 30 feet when chasing prey.

The zoo’s pavilions and outdoor exhibits are centered around a garden and sea lion park. You can watch from above and below-water viewing areas, as the sea lions sun themselves and swim.

The grizzly bears are another popular exhibit. These particular bears were rescued by the zoo when they grew too comfortable near people in the wild.

In “Temperate Territory”, an Asian habitat, you’ll see snow monkeys in the water, red pandas in the trees, using their long bushy tails for balance, and cranes.

The “Tropic Zone”, an indoor tropical rainforest, has birds and animals from forest floor to canopy. If you listen closely to the black-and-white ruffed lemurs, you can hear the calls they use to communicate. The Tropic Zone is also home to emerald tree boas, showy Victoria-crowned pigeons and brilliant blue poison dart frogs.

Young children will love the Tisch Children’s Zoo, where they can touch domestic animals such as sheep, goats, zebu and the only cow in Manhattan! They can also crawl, jump, climb and pretend to be the animals they see. The zoo also offers day camps and other programs that include animal encounters, exhibit visits and art activities designed to connect kids to nature.

“Really lovely – the small size is actually what makes this zoo so fun. Kids don’t get tired and every turn is a new animal. Great visibility and great upkeep. Also the children’s zoo is worth a stop for young children for sure. Penguins were a highlight, and sea lions were delightful. Worth an hour or two for sure!”

Experience this unforgettable attraction via Amtrak to Penn Station in New York City—Don’t forget to use the New York By Rail 15% discount! 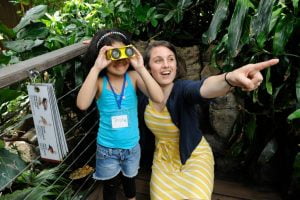 Visit the Central Park Zoo to see snow leopards, red pandas, and other exciting animals in…