As the largest metropolitan zoo in the U.S., the Bronx Zoo offers world-class exhibits and free, all-day admission on Wednesday’s.

The Bronx Zoo, located within its namesake borough of New York City, is the largest metropolitan zoo in the U.S., and one of the most famous. Over 2 million visitors come each year to explore its 265 acres of parklands and animal habitats.The Bronx Zoo has special activities and programs for visitors of all ages. Special events, thrilling summer camps and unique exhibitions make the Bronx Zoo so extraordinary!

What to See at the Bronx Zoo

From mid-March through October, the Butterfly Garden attracts over a dozen different butterfly species, which flutter through its meadow and greenhouse, gathering in large numbers by nectar trays. If you’re lucky, one might land on your elbow.

The Children’s Zoo is a farmyard where younger kids can pet sheep and donkeys. It’s also home to more exotic critters, such as an anteater, two-toed sloth, prairie dogs, mini Nubian goats and alpacas.

You can ride a camel, a bug carousel or a monorail. The monorail, through the Asian Wilderness, puts you face to face with red pandas, elephants and rhinos.

In 2017, the zoo introduced Nature Trek, 12 covered rope bridges between towers, elevated tunnels and smaller obstacles, plus a play area with a sandbox, water sprinklers and structures to climb on. Also in 2017, the zoo opened its Bronx Zoo Treetop Adventure with ropes courses for various ability levels and a 400-foot zipline that traverses the Bronx River.

Popular Exhibits and Attractions at the Bronx Zoo

The Butterfly Garden – Well over a dozen different butterfly species flutter through the meadow and greenhouse, yet species seem to stick together. Often times, a large number of the same type are seen gathered at one nectar tray.

Congo Gorilla Forest – Gorillas are among our closest relatives in the wild and that’s pretty clear watching those at the Bronx Zoo. From cautious to playful to nurturing, each has a unique personality. It’s always a thrill to see them interact.

Madagascar! – There are about 97 lemur species native to the island of Madagascar, among them Coquerel’s Sifaka. Those at the Bronx Zoo are often active, using their strong hind legs to leap from limb to limb and rock to vine.

“You are surrounded by woods, amazing animals and atmosphere and you forget you are in the Bronx! The zoo is amazing.”

Take Amtrak to the Bronx Zoo!

Visit exciting exhibitions and attractions at the Bronx Zoo via Amtrak to Penn Station in New York City—Don’t forget to use the New York By Rail 15% discount!

From Penn Station take the 2 subway line to Pelham Parkway, or, take the BxM11 express bus which makes stops along Madison Avenue, between 26th and 99th Streets, then travels directly to the zoo. 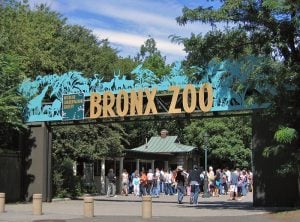 As the largest metropolitan zoo in the U.S., the Bronx Zoo offers world-class exhibits and…