The De Angelis carousel, a vintage menagerie carousel dating back to the 1920s, will receive new, solar-powered life and a lively home in Buffalo next year after its meticulous restoration, a multi-million dollar operation spearheaded by the Buffalo Heritage Carousel Inc. (BHC). The restored carousel will be housed in an enclosed roundhouse located in the heart of Canalside, Buffalo’s emerging, revitalized urban waterfront. Construction is set to finish in July 2021.

The BHC is a non-profit organization founded with ambitious plans to bring a solar-powered carousel to Buffalo’s inner harbor to celebrate the history of carousel manufacturing in Western New York, as well as the area’s legacy of leadership in the use of renewable energy. The organization’s mission of providing Buffalo’s visitors entertainment and education is what ultimately led the De Angelis family to part with their treasured carousel and its significant history.

One of only about 20 models ever produced by the Herschell-Spillman carousel company in North Tonawanda, N.Y., the carousel was designed and manufactured in 1924 for Domenick De Angelis, an Italian immigrant who fostered life-long dreams of owning and operating a carnival. Although De Angelis’ American dream eventually became a reality, the journey was anything but smooth-sailing: the family’s first park, set on 35 acres in Staughton, Mass., was forced to close its doors after the Great Depression, and the skating rink and arcade De Angelis purchased to replace it was swept into the ocean during a hurricane in December of 1938. De Angelis went on to open yet another arcade, the humble success of which allowed him to build a house for his family next door. However, De Angelis’ third and final arcade dissolved after his death in 1952.

The carousel was stored inside the family’s home until 1988, when the De Angelis grandchildren transported it to Carousel Works in Manfield, Ohio, in the hopes it would one day be restored and relocated. After almost thirty years in storage at Carousel Works, the family’s wish was finally fulfilled by the BHC’s offer to purchase the carousel in 2016.

A design-to-installation company, Carousel Works is the world’s largest manufacturer and restorer of custom wooden carousels. Thirty one of the De Angelis carousel’s original 34 animals will be completely restored, along with three chariots, several display figures, and 14 scenic panels and shields, which are being hand-painted by local volunteers in North Tonawanda. The finished carousel, outfitted with over 400 lights, will serve as a beacon of history and community for downtown Buffalo.

“The De Angelis Carousel is a symbol of Buffalo’s proud history and its bright future, and we’re honored to help preserve this local gem for generations to come.”

Experience this unforgettable attraction via Amtrak to the Exchange Street or Depew stations in Buffalo—Don’t forget to use the New York By Rail 15% discount! 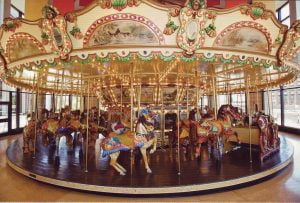