Buffalo’s City Hall is one of the largest in the country.

Built in 1932 by the John W. Cooper Company, the landmark is constructed with an art deco style with a touch of modern flair that shows through on all 32 floors of the building.

Tours of the building are offered to the public every weekday at 12 noon and run for about an hour. It takes guests inside the building. Visitors see locations like the lobby, the Common Council Chambers, the Mayor’s office and the observation deck, which has an amazing view of Buffalo.

The lobby of City Hall can be compared to a museum. It has numerous paintings lining its walls and statues that mark the four corridors of the room. These statues, titled Virtue, Dilligence, Good Citizenship, Service and Fidelity, each signify a different quality of Buffalo’s community.

The paintings and murals on the walls depict Buffalo’s history. Some of the images show a commitment to production and industry with machines and airplanes and other objects. Other artwork showcases the city’s close proximity to Canada, and public works and service.

The Common Council Chambers is on the thirteenth floor of the building. The room has a large stained-glass window as the focal point, inspired by a sunburst.

“Nice old historic building, great architecture, the best part on the very top is an observation deck that looks out over the city and lake Erie and Buffalo waterfront.”

Experience this unforgettable attraction via Amtrak to Buffalo Exchange Street Station in Buffalo—Don’t forget to use the New York By Rail 15% discount! 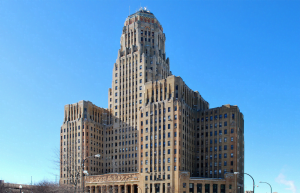