With a live music scene unlike any other, here are seven things to do in Saratoga Springs.

There are few people who enjoy revelry on New Year’s Eve more than I do.

Likewise, festivities revolving around Independence Day on the Jersey Shore boardwalk and Mardi Gras, anywhere across the nation or around the world, give me a sense of triumph.

So you can imagine how I felt, on the Friday night of Memorial Day weekend 2022, when all three seemed to come together in downtown Saratoga Springs.

Music was at the heart of it all, played by a range of bands and DJs, at a range of venues, bars and clubs. There was a steady stream of people coming and going, here and there, all night long, that sustained the generous spirit of a city that, like the tunes pouring out of windows and echoing off buildings, maintains a beat, a groove and a rhythm all its own.

Focusing my musical endeavors around the intersection of Caroline Street, Putnam Street and Maple Avenue, just a block of Broadway, I kept repeating a phrase over and over in my head all night: All You Can Eat. Yes, I felt like I was at the world’s must succulent breakfast buffet, an all-you-can-eat affair, but there was only one thing on the menu: music. 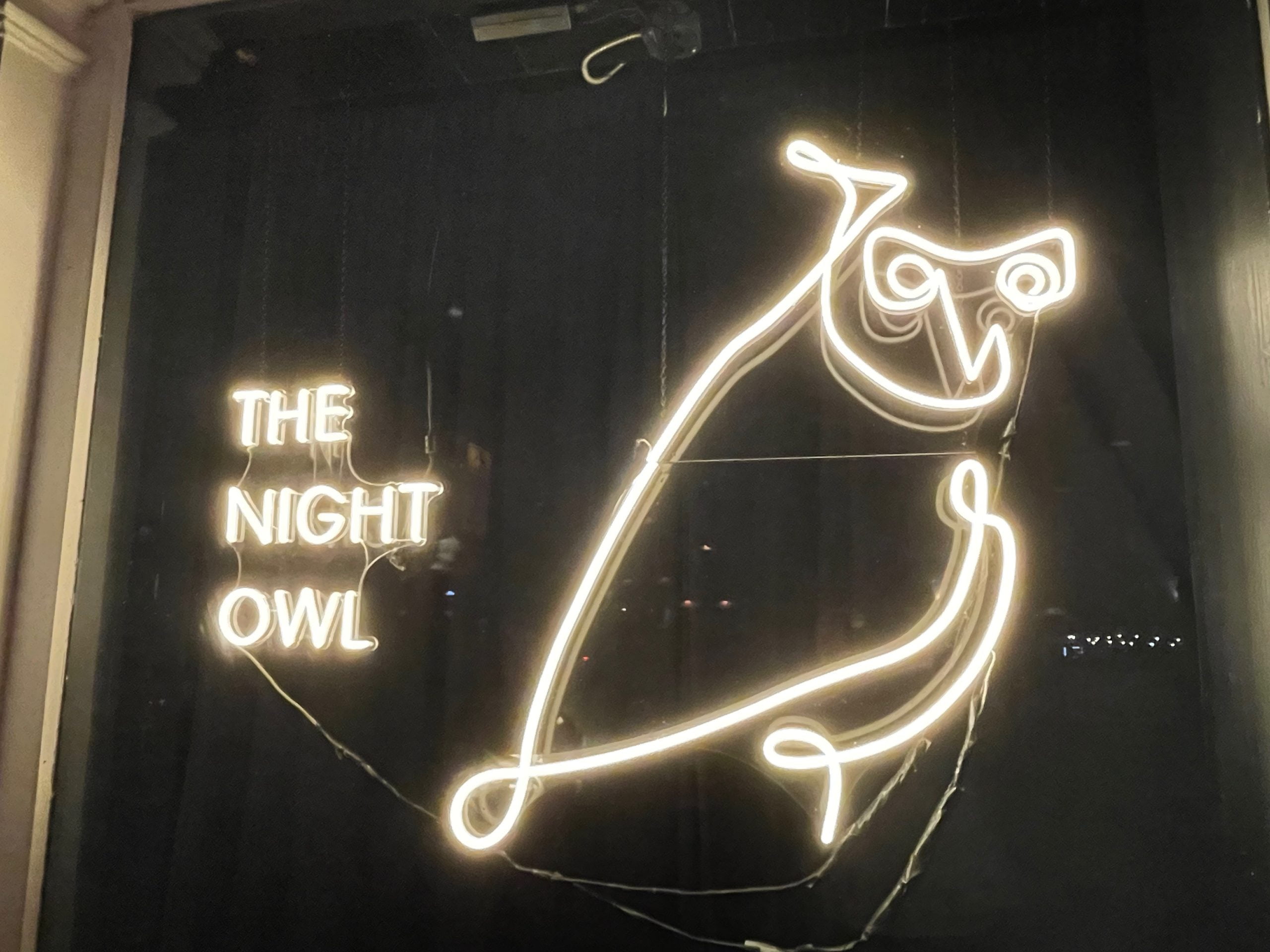 Anyone who has ever embarked on an evening of music, or a road trip to a concert, knows they won’t get far without a good meal establishing a foundation for the coming hours of celebration.

So with that in mind, I set out from my accommodations at the Holiday Inn Saratoga Springs for the short walk to Boca Bistro, a restaurant on Broadway. I was hungry, Boca Bistro had a dazzling menu and the rest, as they say, is history.

From the Traditional Dinner Tapas menu, I selected the Stuffed Dates: Dates stuffed with valdeon and Marcona almonds, wrapped in bacon, with cider glaze. If you don’t think stuffed dates can change your life, then head over to Boca Bistro and then let’s talk. The Ham Croquettes—Serrano ham fritters with manchego cheese—were an obvious choice.

And from the dinner menu, I had the Bacon & Bean Stew, a white bean and chorizo stew with pork belly and smoked paprika; and Jalapeño Bacon Mac: A house mac and cheese blend with crispy bacon, jalapeños, house chip breadcrumbs and chipotle aioli.

How good was this meal? I went back the next night and ordered the same dishes for takeout back to the Holiday Inn. Yes, it was just as good the second time around. Thank you, Boca Bistro!

My rager of an evening immersed in Saratoga’s music scene began with what I thought would be some tunes on the mellower side of the musical scale.

But I was wrong.

Michael Benedict Jazz Vibes at 9 Maple cooked, cooked, cooked. This quartet soared. And I was very lucky to get in on the early side, which allowed me to avoid the long line of jazz lovers waiting to enter this cozy joint with a lot of personality. Did I mention the cover charge was just $2 and when I left to roam the streets before returning, the bouncer assured me he would remember me for re-entry—and he did. Thanks 9 Maple. I’ll see you again soon.

Next door to 9 Maple was The Night Owl. I’ll be honest here, I wasn’t quite sure what to make of it.

The place was blaring music that sight unseen was obviously coming from DJs, and the buzz at the entrance was clearly growing. I peeked in a window and found a crazy good dance scene, and I mean crazy good. A multi-generational crowd was getting down big time, so I made my way in and found separate dance floors with separate DJs, all catering to a crowd that came with one thing in mind: moving, moving, moving on the dance floor. I found a good spot to take it all in and was struck by what a scene this venue had created for itself. The more I stuck around the more I felt like I could have been at a club in Berlin; or Paris; or Rio de Janeiro. But no, not a chance—I was in downtown Saratoga Springs, don’t you know.

From there, I could do no wrong when it came to music in Saratoga.

Live Music: Out on the Town 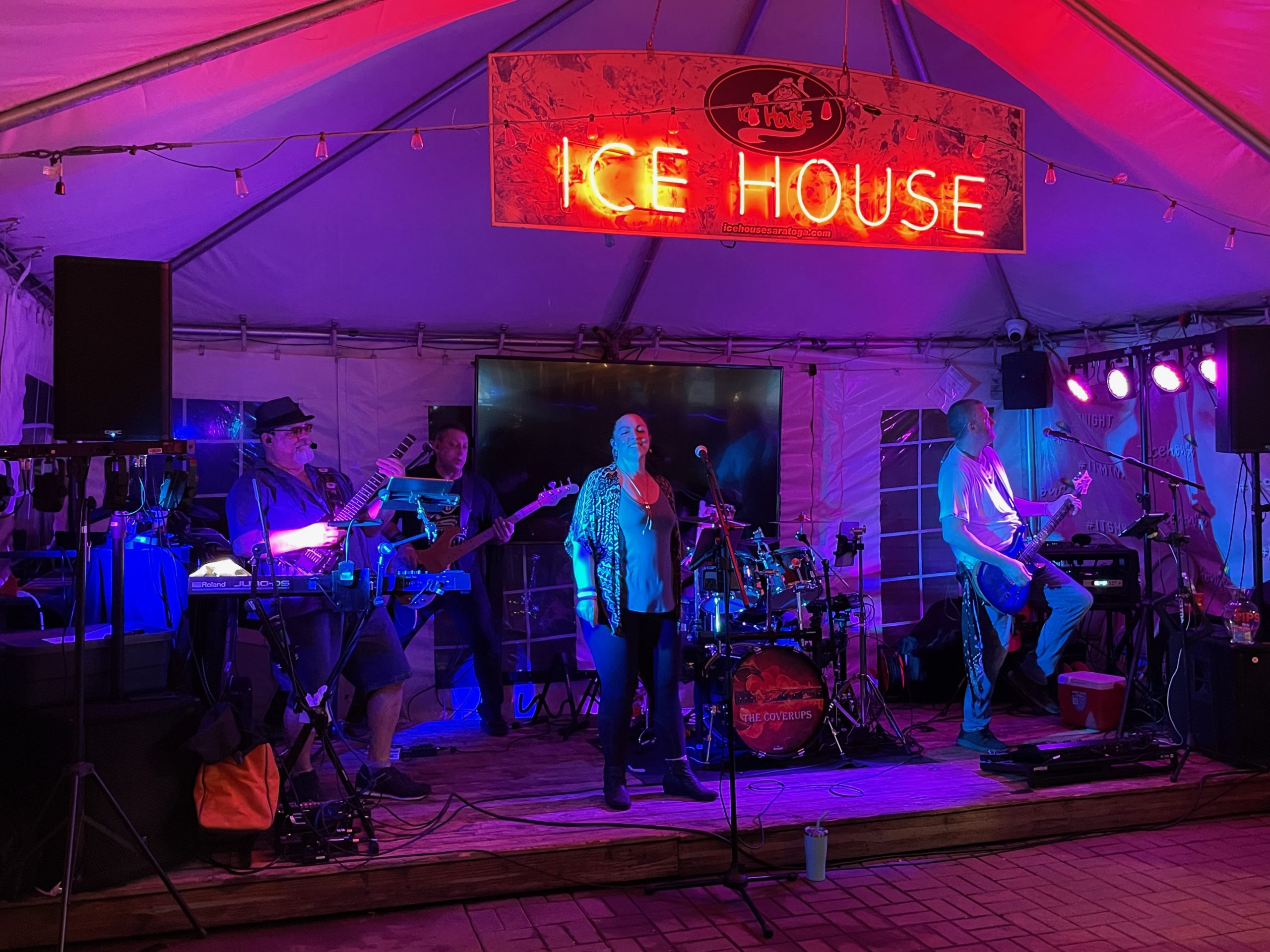 The Coverups at The Ice House on Putnam Street gave everyone in the crowd reason to cheer when they played “We Got the Beat” by The Go-Gos. Their version of “My Own Worst Enemy” by Lit deserved a Grammy.

Lyssa Coulter and her band delivered a bold set of music at Nashville of Saratoga, which fronts Phila Street but offers access to its music from Putnam Street. I was skeptical of a place that tried to capture the spirit of Nashville north of Albany but was pleasantly surprised. I have been to Music City in Tennessee many times, and I love it dearly, and this place does a good job of paying homage to an enduring American destination for music lovers and performers alike.

From there it was on to Putnam Place, which left me feeling as though I had traveled to New York City for a gig at Roseland Ballroom or Irving Plaza. This venue was all about the music, with little in the way of bells or whistles, but plenty as far as music pouring off the stage. Karl Bertrand delivered a passionate performance while playing solo. And while I’m still working to sort out The Va Va Voodoos, I was impressed with their stage presence and assertiveness, which resonated strongly with me.

Adding to the atmosphere of that recent Friday night were the Tom Petty covers that came out of the open, oversized windows at Saratoga City Tavern; the Red Hot Chili Peppers song I heard from Spa City Tap & Barrel; and the Sister Hazel cover that drew me into Druthers Brewing Company on Broadway.

Hours after finishing that meal at Boca Bistro and satiating my appetite for fine food, I had finished roaming the streets of Saratoga, wrapped up my “All You Can Eat” musical buffet and headed back to the Holiday Inn feeling satisfied, fulfilled and content. 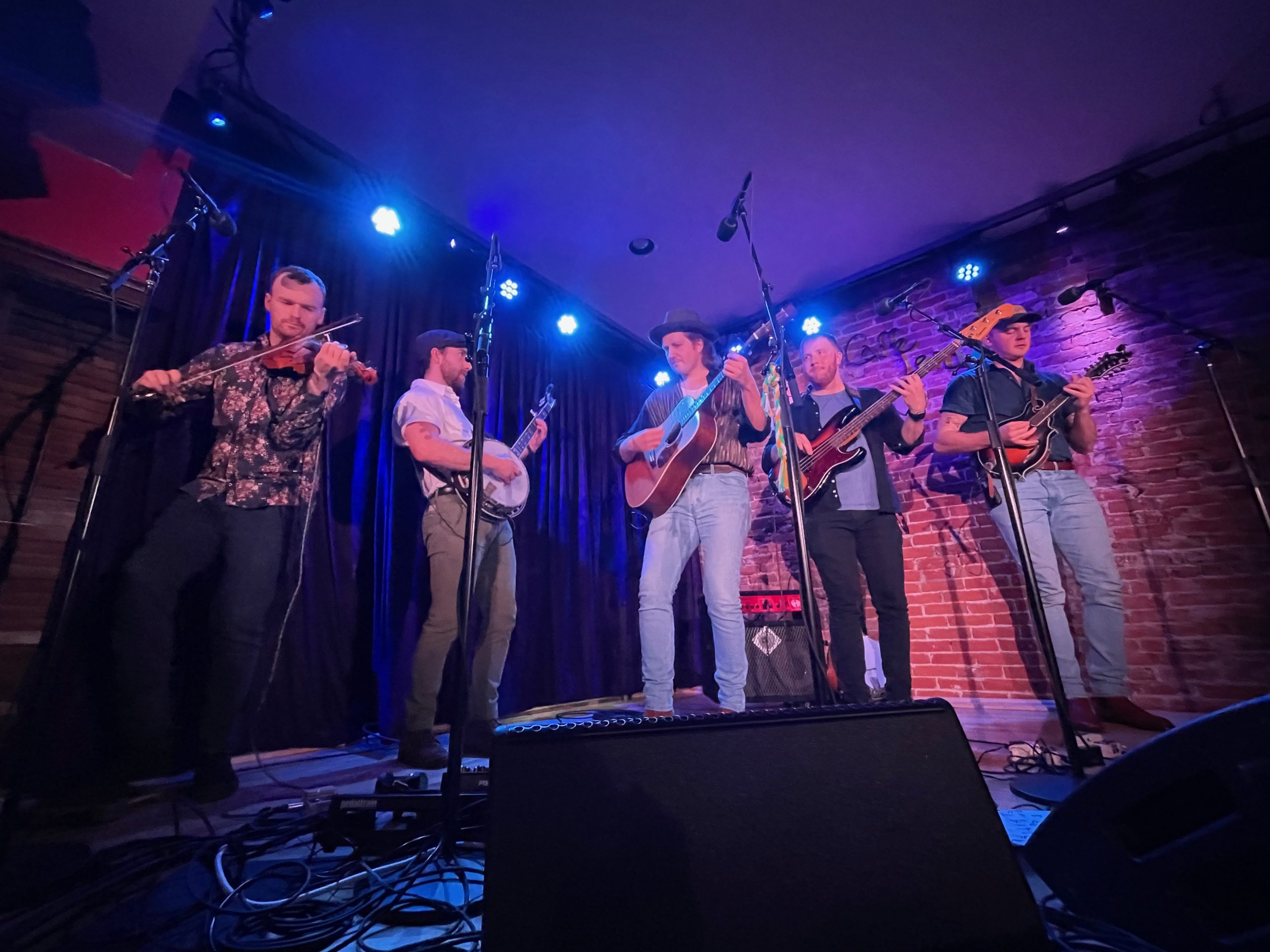 Two Saratoga music venues that warrant a special shout-out have been anchors of this cultural community for decades.

Caffe Lena on Phila Street opened in a former woodworking shop in 1960 and, according to its website, is “widely recognized as the longest continuously operating folk music venue in the United States. The Library of Congress calls Caffè Lena ‘An American treasure,’ and we have been recognized by The Grammy Foundation for our important contributions to the development of American music.”

According to the New York Times, Bob Dylan, “by most accounts, played his first out-of-town show there after arriving in New York City.”

Caffè Lena illustrates the depth of Saratoga’s music scene while underscoring the role of the region in American history, musical and otherwise. At the same time, Caffe Lena, quite simply, offers compelling evenings of music within cozy confines in the heart of a great American city.

Upcoming performances at Caffe Lena include: 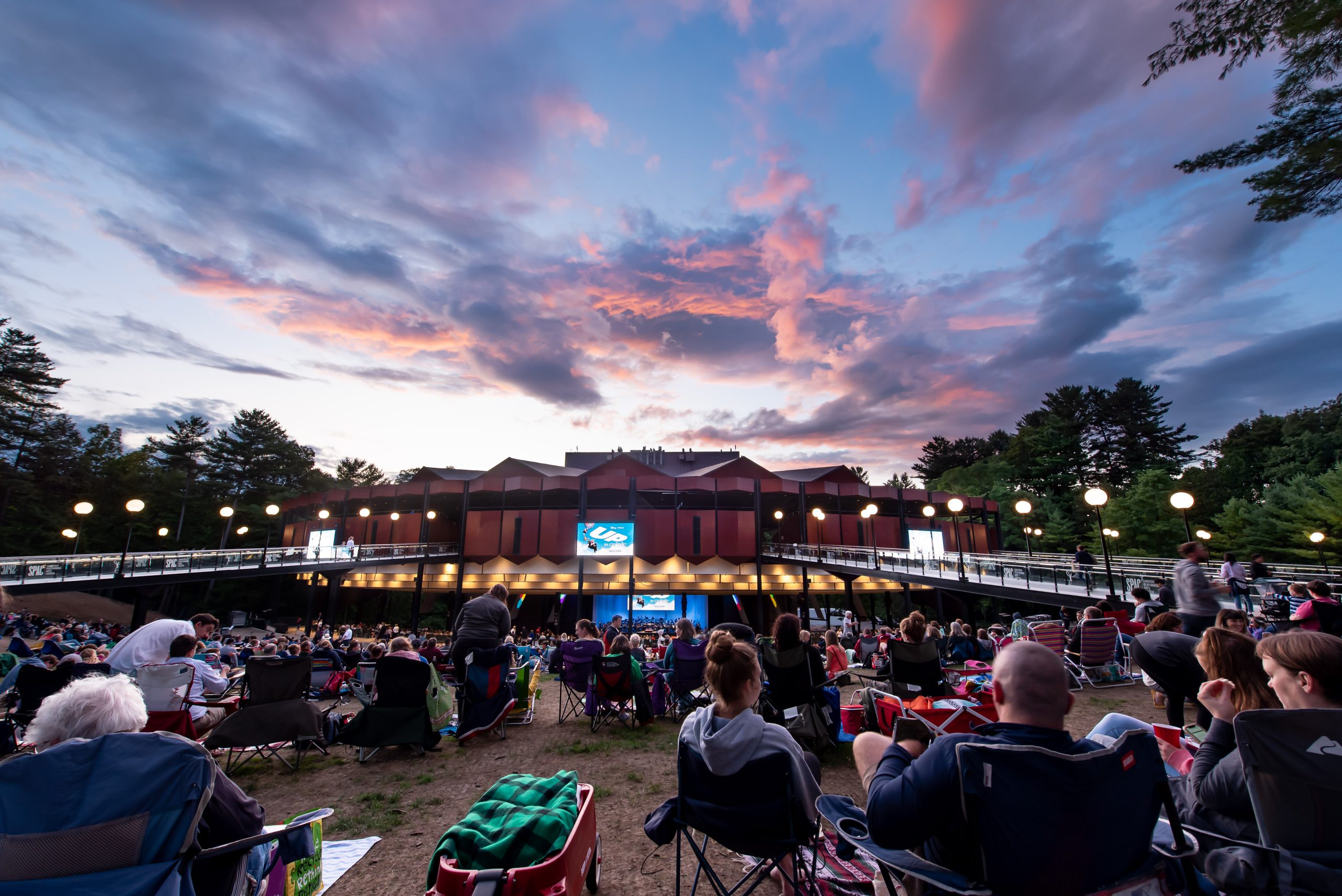 And what’s to say about Saratoga Performing Arts Center? Plenty.

Located in Saratoga Spa State Park, which sits just a few minutes from downtown Saratoga Springs, SPAC is a gem of an amphitheater with an inviting lawn that combines music, dance, the culinary arts, the great outdoors and so much more.

Well-known for its partnership with Live Nation, SPAC hosts concerts by nationally-touring acts that draw thousands. The 2022 Live Nation calendar at SPAC includes:

Another culinary event will be held July 25-26 at SPAC, in conjunction with performances by the Philadelphia Orchestra.

Beyond the Live Nation concerts, SPAC itself will host The Freihofer’s Saratoga Jazz Festival June 25-26, with two stages and a lineup of 24 incredible bands. Performers include the Jazz at Lincoln Center Orchestra with Wynton Marsalis; Booker T. Presents: A Stax Revue; Ledisi; Robert Glasper; and Galactic featuring Anjelika Jelly Joseph. 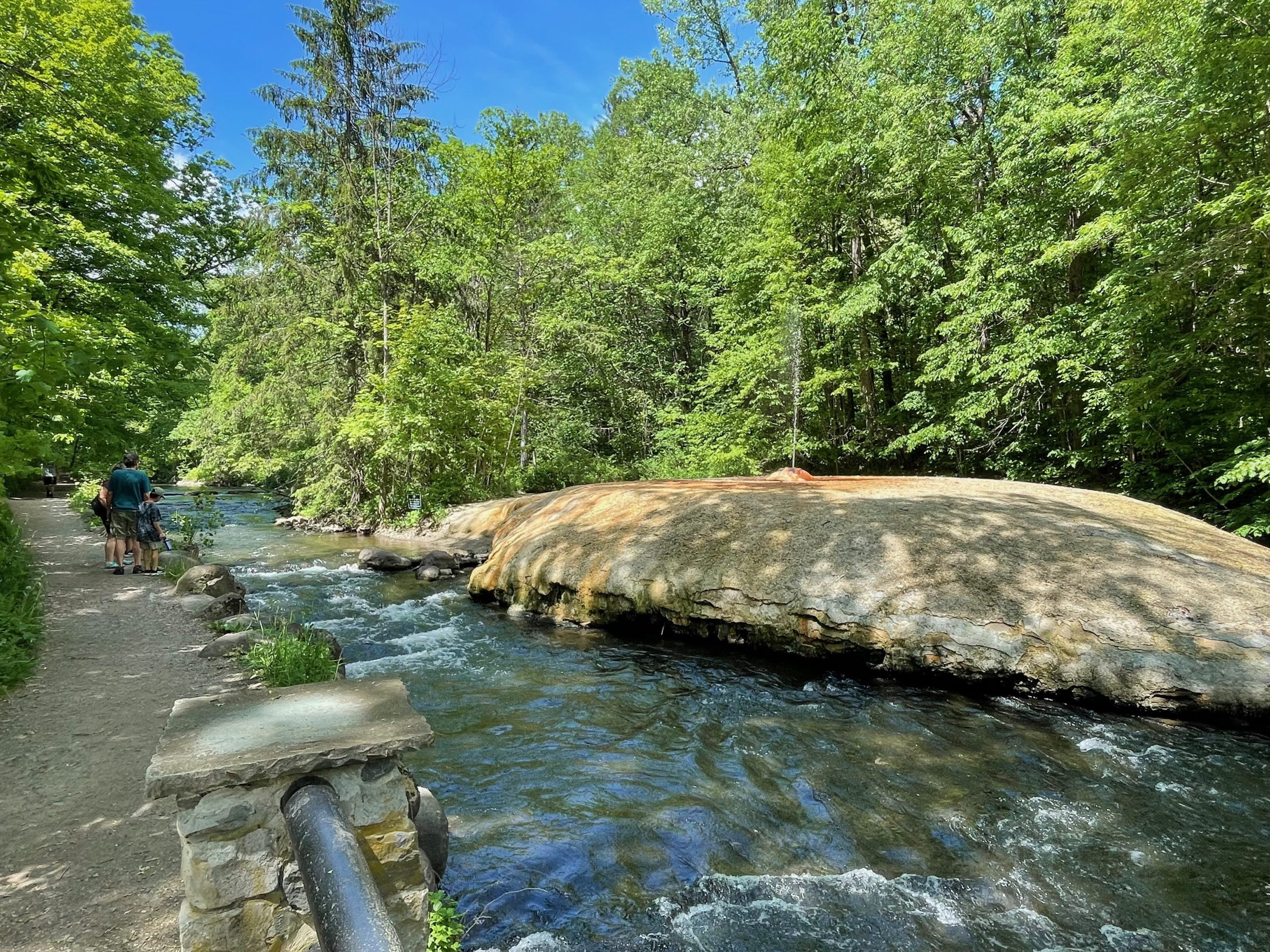 The day after my big night of experiencing the dynamic Saratoga Springs music scene found myself sleeping in, securing a solid meal and heading to Saratoga Spa State Park to unwind.

Related: More to do at Saratoga Spa State Park

The Vale of Springs offers plenty, without too much exertion. There is the Mineral Springs Trail, with the historic Island Spouter; and Hayes and Orenda Mineral Springs. There are two pathways, one that follows Geyser Creek and another that follows a ridgeline up above. One highlight is walking beneath the pedestrian bridge that serves as an entrance to SPAC. There are also ample opportunities to get your feet wet and relax on a nearby lawn, beneath the shade of trees.

As for my post-music adventure, next-day meal, I passed on traditional breakfast and went straight for the high-octane sustenance: a Reuben sandwich from Fat Paulie’s Delicatessen. Located a few blocks off Broadway away from Congress Park, Fat Paulie’s requires a short walk. But it’s well worth the effort. I’ve eaten a lot of Reuben sandwiches in my day, and Fat Paulie’s is among the most decadent and delicious.

Speaking of walking in Saratoga Springs, I would be remiss if I failed to mention the walkability of this city. I could drone on and on about it, but let me just say that on the Friday of Memorial Day, from about 7 a.m. until just before midnight, I walked 25,021 steps, the equivalent, according to my Apple Watch, of traversing 11.36 miles. Now keep in mind, all of that walking took place between the Holiday Inn and Caroline Street, which is separated by just three blocks and Congress Park.

So, there you have it, my big visit to Saratoga Springs, by way of Amtrak and the Saratoga Springs Amtrak Station, which offered plenty of performances, fine food, exercise, the great outdoors and full immersion in one of the greatest cities anywhere. All of this, every last ounce of it, every single second of it, was, without question, fun, engaging and intellectually stimulating. Dare I say, it was music to my ears?

See you next time, Saratoga Springs.

For more frequent service to the Capital-Saratoga Region, you can also use the Albany-Rensselaer Station (ALB) station in Rensselaer, 45 minutes away by taxi, ridesharing or car rentals, which are available right at the ALB station through Enterprise. Call the Rensselaer  office at 518-427-3893 and use the code, NYTRAIN, for a car rental discount when making your reservation. 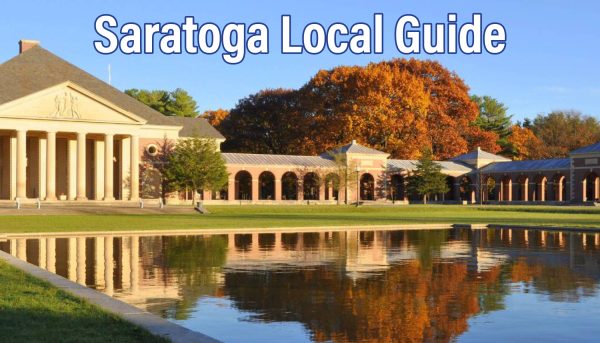 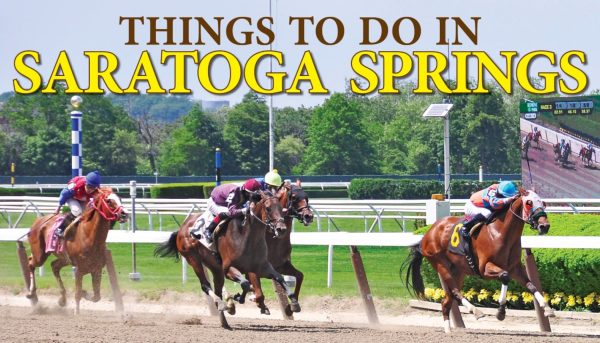 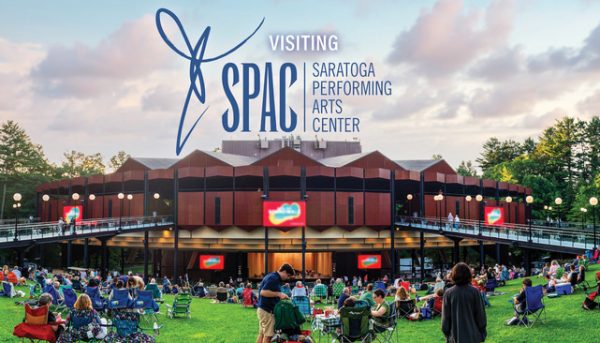