World-class Entertainment for All

Caffè Lena is dedicated to presenting deserving talent regardless of fame and their diverse programming sets the stage for musical discovery year-round. With performances by Bob Dylan in the 1960s and Sawyer Fredericks less than 10 years ago, the venue has a long reputation of helping launch many well-loved artists. No matter the show, guests are promised world-class performances just feet away.

Caffè Lena is a non-profit organization in a renovated 19th-century building in Saratoga’s historic downtown. The renovations allow for the continuation of Caffè Lena’s celebrated programming for decades to come. Now 100% handicap-accessibility to the second-floor performance space is available, and the venue is more spacious with 110 seats, along with other improvements.

Caffè Lena also has a School of Music for youth and adults. This unique school teaches its students without sheet music, instead allowing them to discover the instrument by ear. Classes are in small groups and can be for instruments like the banjo, fiddle, guitar, ukulele and others.

Visit Caffè Lena for great performances and a welcoming atmosphere that you won’t forget!

“One of my favorite music venues! Intimate venue with top talent and tons of cool history. Audience and volunteer staff always really care about the music.”

Get picked up from Saratoga Springs Station and taken to your reserved NYTRAIN Enterprise Rent-a-Car. Click here to reserve your car or call the Saratoga Springs office today at: 518-587-0687. 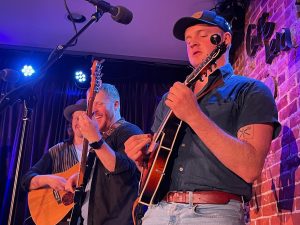