An entertainment and shopping district  illuminated by large billboard screens and corporate logos, and one of the most bustling intersections in Canada.

Yonge–Dundas Square is a public square at the southeast corner of the in Downtown Toronto, Ontario. Since its completion in 2002, the square has hosted many public events, performances and art displays, establishing itself as a prominent landmark in Toronto and one of the city’s prime tourist attractions.

Surrounding the square are other major landmarks, including the Toronto Eaton Centre, Ed Mirvish Theatre, and the Citytv building. Compared to Times Square in New York City and Piccadilly Circus in London, Yonge–Dundas Square is continuously illuminated by large billboard screens that make for a wondrous spectacle.

“If you’re new to Toronto, this is the place to be for street performers, free concerts in the summer, and bright billboards galore. It’s essentially the Toronto version of New York City’s iconic Time Square, only better.”

Experience Yonge & Dundas Square via Amtrak to Union Station in Toronto. Don’t forget to use the New York By Rail 15% discount!

Get picked up from Toronto’s Union Station and to your reserver NYTRAIN Enterprise Rent-a-Car. Click here to reserve your car, or call the Toronto office today at: 416-425-3777. 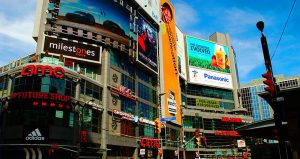 An entertainment and shopping district  illuminated by large billboard screens and…