The Structure of the Armour-Stiner Octagon House

Take a trip to Irvington, NY and see one of the most visually unique homes in the area by visiting the Armour-Stiner Octagon House! At the time of its construction, this beautiful home was the only known, fully domed octagonal house. Additionally, it was the only one that replicated Donato Bramante’s 1502 Tempietto in Rome.

The house was purchased in 1872 by Joseph Stiner, who was a New York City tea merchant. Stiner added the dome and verandah to the house which established its elaborate and classical architecture. The house was purchased in 1978 by Joseph Pell Lombardi who sought to restore and preserve the architectural integrity of the home. In addition, his son, Michael Hall Lombardi, performed the restoration work throughout the house to maintain its 1872 appearance. The design of the home best reflects an American neo-Roman style, which was popular in the third quarter of the 19th century. This house is now highly recognized in the Hudson Valley and the world for its unique classical design.

Visitors can take private group tours through the home, use the site as a film set, or purchase Lombardi’s book about the house. Feel free to visit the Armour-Stiner Octagon House website to learn more about this historic site!

“Most striking was the love poured into this home through decades worth of conservation efforts.”

Experience this unforgettable attraction via Amtrak to the Yonkers Station in Hudson Valley—Don’t forget to use the New York By Rail 15% discount! 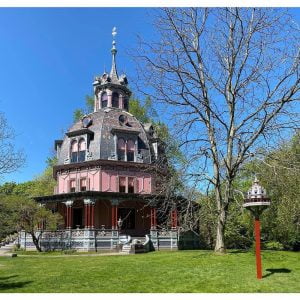