A lighthouse both notable for its history and its appearance in the children's book, The Little Red Lighthouse and the Great Gray Bridge.

Ever wanted to get up close to one of those beautiful lighthouses you see along the Hudson River? The Little Red Lighthouse, or Jeffrey’s Hook Lighthouse, can be accessed through Fort Washington Park near Amtrak’s Yonkers Station.

You may not be able to recognize the structure while on the train, but this 40-foot lighthouse is easily visible from a ground view in Fort Washington Park. Visitors also may remember this lighthouse from the children’s book, The Little Red Lighthouse and the Great Gray Bridge.

The lighthouse is located along a part of the Hudson River that is notable for its tricky conditions. This part of the Hudson River was once described as Jeffrey’s Hook, and was considered dangerous because of the high number of shipwrecks that would occur in the area. These treacherous conditions are why the lighthouse exists, as it plays a key role as the beacon that warns ships in the area of the potential danger.

Back in 1889, two 10-candlepower lanterns were placed on the pole in 1889 to aid with navigation. However, barge captains began to demand a higher-powered beacon that would be much brighter and aid in better warning ships on the river. This alteration took place in the early 20th century.

Today, the lighthouse can be visited through traveling to Fort Washington Park underneath the George Washington Bridge.

“Cool view! It’s a nice quiet spot right by the water if you want a relaxing spot to chill at. It’s right off of the Hudson River Bikeway so it’s a perfect stopping point.”

Experience this unforgettable attraction via Amtrak to Yonkers Station in Hudson Valley—Don’t forget to use the New York By Rail 15% discount! 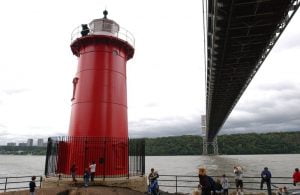 A lighthouse both notable for its history and its appearance in the children's book, The…