Enjoy a unique architectural beauty situated right within the Empire State Plaza in Albany, New York. The Egg Performing Arts Center is not only renowned for its unique structure, but also for being a fantastic music venue. The Egg holds multiple performances throughout each year, hosting a variety of talented musicians and groups.

Back in 1966, construction for The Egg began and was completed 12 years later in 1978. Architect, Wallace Harrison, designed the building and its distinct shape. Two theaters are among The Egg, including the Lewis A. Swyer Theater and the Kitty Carlisle Hart Theater. The Swyer Theater seats approximately 450 people, whereas the latter seats 982. Due to its great size, the Hart Theater hosts larger productions. However, the Swyer Theater hosts smaller events, such as chamber music concerts, cabaret and much more.

Be sure to check out The Egg’s website for plenty of upcoming events and performances.

Visiting The Egg does not have to mean viewing a concert. The structure of The Egg itself is something incredible to behold. Located in Empire State Plaza, there are plenty of things to do in the area in addition to visiting the performing arts center. Feel free to explore and take plenty of photos. Click here to learn more about visiting the Albany area.

“It looks like a relic of an older time, but I can assure you that this venue has still got it. Nestled in the incredible Empire Plaza, the two listening rooms at the egg are incredible venues with excellent sound, and no bad seats in the house. “

Experience this unforgettable attraction via Amtrak to Albany-Rensselaer Station in Albany—Don’t forget to use the New York By Rail 15% discount! 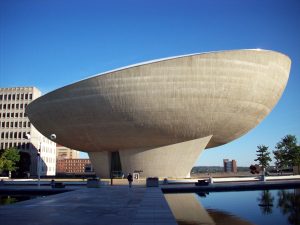