Susan B. Anthony was one of the greatest fighters for equal rights in America.

Most of us know her as the leader of the women’s suffrage movement in the United States, helping to push for women’s right to vote.

Her home-turned-museum located in Rochester is dedicated to showcasing an inside glimpse into of Anthony’s life and work. The building is the site of Anthony’s arrest in 1872 when she showed up to vote in an election and her headquarters during her time as the president of the National American Women’s Suffrage Association.

In addition to fighting for equality for women in voting, Susan B. Anthony fought for to abolish slavery. She is not widely known for her work as an abolitionist but she worked with fellow reformer Elizabeth Cady Stanton after the thirteenth amendment was passed to form the Women’s Loyal League to try to push that newly freed slaves and women both have the right to vote.

Women’s rights were always on the agenda for Anthony. In 1848 New York passed the Married Women Property Law largely because of Anthony’s efforts. The law states the any married women in the state of New York to own property, keep the wages that they earn working and maintain custody of their children.

Today the house is 90 percent restored to match how it looked when Anthony lived there. They museum hosts events and programs such as parades, school programs and lecture series’.

The museum is open Tuesday through Sunday. Adult tickets are $15.00. The tours are roughly 45 minutes each and multiple run per day. The museum is located in a neighborhood, which allows guests to walk the streets of the Rochester neighborhoods like Susan B. Anthony once did. They also have countless options for accessibility. The whole first floor of the building is wheelchair friendly, they do tours via sign language for those who are deaf or hard of hearing, and have objects that can be handled for the visually impaired.

“Beautifully preserved house and informative guided tour which explains the life and achievement of Susan B Anthony. Well worth a visit.”

Take Amtrak to The Susan B. Anthony House & Museum 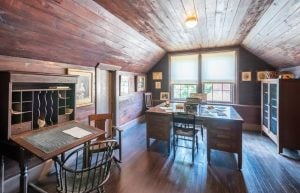