About the Saratoga Performing Arts Center

The Saratoga Performing Arts Center (SPAC), located in the resort town of Saratoga Springs, holds elite performances by the New York City Ballet, the Philadelphia Orchestra, and the Chamber Music Society of Lincoln Center, to name a few. The center’s beautiful location amidst hiking trails, geysers, and mineral springs in a more than 2,000 acre-park draw vacationers and locals alike. Founded in 1962, SPAC has become one of the largest and most prestigious summer festivals in the nation. SPAC celebrated its 50th anniversary in 2016 with a world premiere by City Ballet’s Justin Peck and composer Michael Torke.

Saratoga Performing Arts Center’s mainstage amphitheater seats 25,000 comfortably, with a lawn large enough for an additional 20,000 people to enjoy the show. In addition to the performers mentioned above, the stage is home to the SPAC “on Stage” series and pop, rock, and country concerts from Live Nation.

Patrons can enjoy food and dancing after a show at SPAC’s after-hours Jazz Bar, a lively social scene on the grounds.

When visitors aren’t enjoying a show, there are tons of activities around the Saratoga Performing Arts Center. The National Museum of Dance, the National Museum of Racing and Hall of Fame, and the Saratoga Auto Museum are all located within the same park as SPAC. Concert attendees can hike, bird-watch, and even play a round of golf before and after their show. For major post-performance relaxation, the Roosevelt and Gideon Putnam Spas offer premier mineral treatments. The park is also a great venue itself, so keep an eye open for SPAC performances on the greens!

After canceling most events for the 2020 season, SPAC is back in 2021. For the most updated Covid-19 guidelines for the various events held at SPAC, click here. 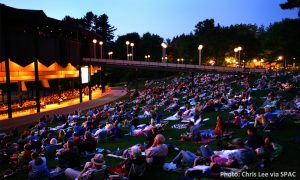