This brick lighthouse is the last remaining of three lighthouses surrounding Rondout Creek. Right in Kingston, NY the lighthouse can only be accessed by boat, making it a must-see adventurous attraction.

Finished in 1915, the structure is owned by the City of Kingston and operated by the Hudson River Maritime Museum. The first of the three lighthouse was built in 1837, and was made of wood. Due to storm damage, it was later replaced in 1867 by a stone lighthouse. Because of Rondout Creek’s importance as a major waterway, it was necessary for the entrance of the creek to be marked. This significance was especially important in the 19th and early 20th century because of the opening of the D&H canal which met its end at the creek.

Today in 2021, tours are offered to visit both the Rondout Lighthouse and the Esopus Meadows Lighthouse. Because the lighthouse is only accessible via boat, the tours are administered aboard the solar powered boat, Solaris. Unfortunately, the lighthouse is not handicapped-accessible. There is also a lack of bathrooms at the lighthouse, so be sure to use the restroom prior to departure.

“Fascinating tour of the lighthouse, made even better by boat ride on a solar-powered boat that glides near-silently up the creek. Knowledgeable guides are always learning more, and keeping their presentations fresh.“

Experience this unforgettable attraction via Amtrak to Rhinecliff-Kingston Station in Hudson Valley—Don’t forget to use the New York By Rail 15% discount! 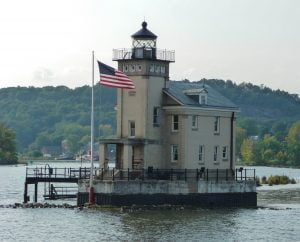