Check out the National Hockey League’s oldest team and watch them battle night in and night out against other teams from across the league.

The city of Montréal simply can’t be discussed without a mentioning of the Montréal Canadiens. It’s hard to walk through the streets of Montréal without seeing one of their iconic bleu-blanc-rouge jerseys, or blue, white, and red. Specifically, on game days, the streets are lined with excited and passionate fans, ready to cheer for their home team. Whether a fan of hockey or not, this team is a cultural icon within the city, and is not to be missed on any visit.

Founded over a century ago, the passion and fire from the fans for this team is unmatched in any other city. Like the city for which they call home, the team operates in both French and English. At home games, the first stanza of O Canada is sung in French, while the chorus is sung in English. Known by English and French fans alike as the Habs, the inviting and accomodating spirit of Canada is truly alive in this notorious NHL team.

While at the game, look for the team’s mascot, Youppi!, an orange, hairy giant designed by Bonnie Erickson, who famously worked for The Muppets. A fan favorite, Youppi! has been with the team since 2005, and was the first mascot the team ever had. His orange hair is recognizable from anywhere in the stands, making him one of the most iconic members of the team.

Head over to the Bell Centre to see the people of Montréal rally behind a team that has won 24 Stanley Cups since their inaugural season. There isn’t much that’s as fun in the city than a Canadiens game!

Take Amtrak to the Montréal Canadiens

Enjoy a historic team from Quebec via Amtrak to Montréal Station in Montréal—Don’t forget to use the New York By Rail 15% discount!

Get picked up from Montréal Station and taken to your reserved #NYTRAIN Enterprise Rent-a-Car. Click here to reserve your car or call the Montréal office today at: 450-670-6700. 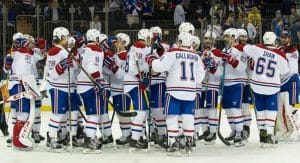