This cornerstone of the greater Toronto area is only 9 miles from the closest Amtrak station and conveniently located near two major highways, with an ample amount of on street and underground parking surrounding the theater.

On all four of its unique stages, the Meridian Arts Center has and continues to feature a variety of theater productions, including musicals, plays and orchestras, as well as more intimate performances like cabarets and art shows. These theaters include the Studio Theater and the George Weston Recital Hall, along with its two newest additions, the Greenwin Theater and the Lyric Theater.

Aside from hosting its annual orchestral series by the Toronto Symphony Orchestra, Orchestra Toronto and Tafelmusik, the Tony Award-winning musicals “Show Boat” (revival), “Ragtime” and “Fosse” all premiered at the magnificent Toronto arts center before making their way to Broadway.

Not only does the Meridian Arts Center showcase prize performances, it also offers a variety of programs and series, like Best of Fringe, for local artists and community involvement.

“The grand glass lobby with its wonderful sweeping staircase makes you feel like a million bucks.”

Experience this unforgettable attraction via Amtrak to Union Station in Toronto, Ontario—Don’t forget to use the New York By Rail 15% discount!

Where to Stay in Toronto

Looking for a getaway opportunity? Spend the night and experience all Toronto has to offer. Take a look at these great hotel options—some offering exclusive New York By Rail discounts! 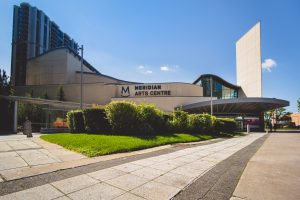