The Marriott Syracuse Downtown is one of the finest hotels in the city and is teeming with history.

The hotel opened its doors in 1924 as the Hotel Syracuse.

It has had quite the resumé of people who have stayed as guests at the hotel. Five United States Presidents and countless actors and musicians including John Lennon, Hotel Syracuse really was the place to be.

In order to preserve the history of the hotel, it closed for renovations in the early 2010s. The $75 million renovation project opened up to the public in August of 2016 and the hotel was renamed to The Marriott Syracuse Downtown.

The hotel has multiple rooms and spaces for guests to enjoy. The Grand Ballroom was one of the longest projects of the renovation. This is because the attention to detail in this room is unprecedented. The chandeliers have over 2,000 crystals, a repaint of the original gold walls and preservation of the original sky painting that sits on the ceiling of the room. The Ballroom is mostly used for weddings and proms and other big parties and events.

The lobby’s transformation was one of the biggest changes to the hotel. Instead of centering on preservation of the paint and artwork, there was a lot of work done to uncover the original artwork that was covered up by mirrors. These murals, which are the ones that guests see when they walk in today, were destroyed from years of dust and smoke and needed to be restored.

The guest rooms doors are original to the 1924 construction of the hotel. They are called “coffin doors” and are a rare thing to come by today. Their original design resembles something of a door-within-a-door, where guests could put their clothes in the interior compartment that they would want dry cleaned. That feature though has been replaced with today’s technology to make sure the doors lock and no one can get in.

Regardless of all the history that is crawling within the Marriott Syracuse Downtown, the hotel has multiple amenities available to guests. A fitness center, four restaurants and a shuttle service to local sites, it is a perfect place for stepping out and exploring Syracuse.

“The most amazing stay I have ever had! The hotel is magnificently restored. It is obvious that there is much attention to detail. The staff is helpful, courteous, hard-working.”

Experience this unforgettable attraction via Amtrak to Syracuse Amtrak Station in Syracuse—Don’t forget to use the New York By Rail 15% discount!

Where to Stay in Syracuse

Looking for a getaway opportunity? Spend the night and experience all Syracuse has to offer. Take a look at these great hotel options—some offering exclusive New York By Rail discounts! 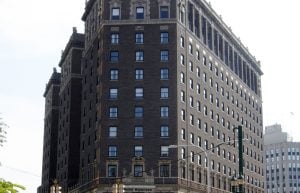