The Kingston Stockade District is a thriving neighborhood with many shops, restaurants, museums, galleries, music venues, farmers’ markets, festivals and more. Though abundant public parking is available, the area is best enjoyed on foot. It boasts a highly diverse range of architectural details for visitors to explore, a chronology of American architecture that spans four centuries. From the early Dutch and English to Federalist, Georgian, Greek Revival, Victorian, Romanesque, Italianate, Neo-Classical, Art Deco and Contemporary.

Visit the Senate House, the Persen House, the Fred J Johnston Museum, Old Dutch Church and more on a stroll throughout the historic district.

The Kingston Stockade District is where visitors will find many fine examples of America’s early colonial history. The first permanent settlement was built in 1652.  Governor Stuyvesant ordered the original stockade built in 1658 to protect the early settlers from local Native American attacks. Originally called Wiltwyck, Uptown Kingston is the largest remaining example of early Dutch settlement in New York State. In 1777, Uptown Kingston’s Senate House is where the first capital of New York was established, and visitors can explore many historic sites and museums that represent that era.

“With a wonderful awning over all the sidewalks leisurely walking and shopping are most attractive. Benches with lovely planters are scattered about liberally making for great people watching and conversations with new friends.”

How to Get to the Uptown Kingston Stockade District

Reach the Kingston Stockade District via Amtrak to Rhinecliff-Kingston Station in the Hudson Valley—Don’t forget to use the New York By Rail 15% discount! 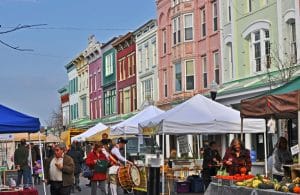