Hulu Theater at Madison Square Garden is used for a variety of events such as stage shows, graduation ceremonies, concerts, conferences, meetings, etc. This addition seats between 2,000 to 5,600 people and is a great venue for specific events!

History of the Hulu Theater at Madison Square Garden

When Madison Square Garden officially opened in 1968, this theater was called the “The Felt Forum,” named after the president of MSG at the time, Mitchell Felt.

Check out these upcoming events at the Hulu Theater and more!

“The staff here is always friendly, the security is tight and the food selection here is pretty darn good. Whether you’re from NY or visiting. . always worth checking out – its a must-do!” 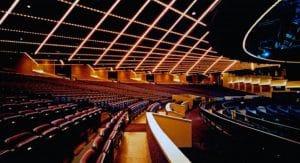 Located beneath the arena of Madison Square Garden, The Hulu Theater at MSG hosts a variety…