Nestled in the city of Newburgh is the historic Ritz Theater. In it, Lucille Ball made her debut performance, Frank Sinatra performed with the Tommy Dorsey Band, and Ella Fitzgerald and Louis Prima sang timeless songs. As a result, this theater, built in 1883, has become the last standing historic theater in the Newburgh.

After Eugene Levy purchase of the Ritz in 1933, the theater became a place for big named artists to perform. In addition, New York City’s Paramount Theater used the theater to test shows prior to their Paramount debut. At this time, the theater was reaching an all time success as famous singers were continuously selling out shows.

The Ritz’s popularity began declining in the early 1960s. Due to the Newburgh-Beacon bridge and I-84 bypassing the city’s downtown area, traffic was deflected away from the theater. As a result, in 1969, the theater closed its doors and the stage area was sectioned off from the house.

After 33 years, the Ritz and the adjoining Hotel Newburgh, reopened after being purchased by Safe Harbor of the Hudson. Safe Harbor is a nonprofit organization that provides supportive housing and support for the arts. In 2006, the organization restored the lobby of the Ritz to once again host performances. Furthermore, in 2008, the theater gained popularity as award winning musicians began holding shows more frequently in the space.

Currently, Safe Harbors has transformed the Lobby of the Ritz into an intimate, flexible performance and visual arts space for the community gatherings. This includes the New York State Council of the Arts’ sponsored music series, where renown and local talents perform annually. Overall, this growth prompted Safe Harbor to continue the restoration of the original theater, for which they are working on today.

To learn more about the historic Ritz Theater, the Anne Street Gallery and more of Safe Harbor’s work, feel free to visit their website.

“Lovely intimate space. Hosts many community events and quickly becoming a prominent contributor to Newburgh and all the people.”

Take Amtrak to the Ritz Theater

Experience this unforgettable attraction via Amtrak to the Poughkeepsie Station—Don’t forget to use the New York By Rail 15% discount!

Looking for a getaway opportunity? Spend the night and experience all that the Hudson Valley has to offer. Take a look at these great hotel options—some offering exclusive New York By Rail discounts!

Rent a car with Enterprise! Pick up your reserved NYTRAIN Enterprise Rent-a-Car right at the Hudson Station. Click here to reserve your car or call the Hudson office today at: 845-485-2222. 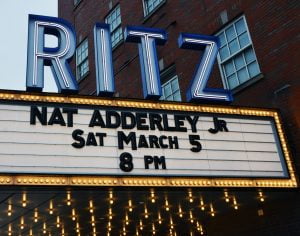