Taste Albany's rapidly evolving culinary scene by exploring the food print of this historic city on the west bank of the Hudson River.

The Historic Downtown Food Tour takes you for a particularly tasty 1.5 mile stroll around Historic Downtown Albany. Tours include 6 tastes and sips at five independent venues for a progressive lunch with a delicious side of history.

A Taste of the Scene

The Historic Downtown Food Tour gives you a generous taste of Albany’s rapidly evolving culinary scene. The tour lasts 3.25 hours with plenty of rests during tastings. End your tour with a toast to the weekend to kick it off on a positive note!

During the tour you’ll see stunning architecture and bits of culture that will give you a fresh perspective on New York’s capital city. Additionally, you’ll exploring this historic city on the west bank of the Hudson River!

C.H. Evans Brewing Company, a family business that got its start brewing beer in 1786 in Hudson and have been in this historic building since 1999.

The Hollow Bar and Kitchen

A perfect ending, in the 2nd oldest building in Albany. A neighborhood pub, with strong British influences in beverages and menu items, with a beautiful garden.

Tours run on Fridays from May through end of October and begin at 12:45 P.M. Maximum capacity is 12 guests.

“The tour does a wonderful job combining the love of food with the love of history into a delightful three hours of walking and eating around downtown Albany. It’s a great adventure for a group of friends or just to do on your own” 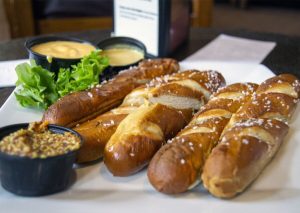