Looking to visit a historic site that focuses on important American history? The Harriet Tubman Home in Auburn, New York is only 30 miles from Syracuse Station in Syracuse, New York, making it a convenient trip by Amtrak. Harriet Tubman was an American political activist and abolitionist who lived through and escaped slavery during the 19th century and worked to free slaves through the network of the Underground Railroad, a substantial part of which exists in New York.

Currently, there are two tours a day at the Harriet Tubman Home, both of which will be held outdoors. In the event of inclement weather conditions, tours will be canceled due to being held outside. The two tours will take place at 10 a.m. and 1 p.m. Tuesday through Saturday. The historic site is closed on Sundays and Mondays. The grounds will also be open for self-guided tours until 3 p.m. on Tuesday through Saturday. Appointments are necessary for tours.

“I had a very informative experience visiting the Harriet Tubman home. It was very interesting and I learned a lot that I may not have if I had not gone. I think anyone who is thinking about visiting definitely should because she is very important to history.”

Experience this unforgettable attraction via Amtrak to Syracuse Station (SYR) in Syracuse, New York—Don’t forget to use the New York By Rail 15% discount!

Get picked up from Syracuse Station and taken to your reserved NYTRAIN Enterprise Rent-a-Car. Click here to reserve your car or call the Syracuse office today at 315-423-0022. 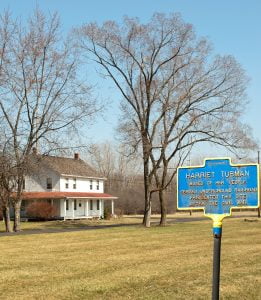