Friends of Historic Kingston is a nonprofit organization founded in 1965 with a mission to preserving and educating about the history of Kingston! Come and see the amazing artifacts and pieces of art throughout New York State's history!

Come and see the historic house refurbished by Fred J. Johnston, an antiques dealer and preservationist from Kingston. Through his amazing work, he has played an important role in the city of Kingston, especially now through the Fred J. Johnston Museum. Explore this at Friends of Historic Kingston!

On the corner of Wall and Main Streets in Kingston is Fred J. Johnston’s work. The history of the man himself started when he left school in 10th grade to work at a factory called Fessenden Shirt Co. Even though he worked there, his goal was to become an antique dealer.

With the opening of his first shop on Main Street, it led to partnerships with architect Myron Teller and F. du Pont. Du Pont made Johnston one of his consultants and refurbished many rooms for him.

Over the years, he made a big impact in the city of Kingston by creating the Landmarks Preservation Commission and worked with the Stockade National Historic District. Through his artistic skills and ideas, Johnston’s work is now on display for all to see.

Come see the massive collection of 18th and 19th century furniture and antiques in the 1812 house that Johnston found in 1937! Originally, the house was owned by New York State Senator John Sudam who hosted many famous American figures.

Johnston decided to buy the house to preserve it from becoming something commercialized. Through lots of hard work and finding money, the house eventually became one of the most notable landmarks in the Stockade National Historic District. Now, it is owned by the Friends of Historic Kingston!

Guided Tours for the Museum

May to October on Fridays and Saturdays, 11-4; Sunday by appointment

The Friends of Historic Kingston Gallery

Explore Kingston’s local history and heritage through the Friends of Historic Kingston Gallery! The exhibits in the gallery change seasonally, but discover the history when you go!

Donations are welcome for those who attend.

Walking Tours at the Friends of Historic Kingston

Take a walk through the earliest Dutch settlement in New York, as well as the birthplace of the state by taking the 1658 Stockade National Historic District Tour! Some notable features of the tour are:

Learn about the immigrants that transformed Kingston from farmland to successful village in Kingston on the Rondout National Historic District Tour! Tour-goers will see the many commercial buildings, homes, and churches, and more that were made by immigrants who settled in Kingston.

For information on these tours and how to register, go to their website!

Discover massive amounts of history in the heart of the Hudson Valley by visiting the Friends of Historic Kingston!

“This museum doesn’t get enough press for what it offers, which is a fully preserved house with furniture and furnishings (especially nice when decorated for the Christmas holidays), plus a small annex with rotating carefully curated exhibits on a variety of local history subjects.”

Discover the history and legacy of Kingston via Amtrak to Rhinecliff-Kingston Station—Don’t forget to use the Amtrak See New York and Save 15% discount! 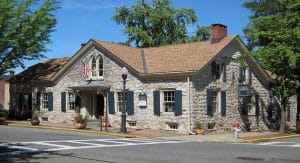