The Crossroads Brewing Company has been named “Best Restaurant in Greene County” and “Best Brewery in the Hudson Valley”. It features housemate beers and New American menu cooked with locally-sourced ingredients.

Crossroads Brewing Company was founded by Janine Bennett and Ken Landin, but their road to start it was a treacherous one. They had made a business plan and gotten denied multiple times as they were attempting to start a business while the American economy has struggled. Eventually, they purchased a former opera house and began converting it into a brewery. The quickly became integrated into the community, but even quicker began producing excellent award-winning beers and IPAs.

The converted opera house is the location for people trying to experience great beers and food in Athens. They offer various sections of award-winning beer but also pair it with award-winning food. Executive Chef Nick Ferriere created a menu using fresh locally sourced ingredients to compliment the various available brews.

Since its inception Crossroads has become a popular and successful brewing company. So much so, that it opened a new location in Catskill in October 2017. This location is specifically focused on brewing, as there is no kitchen on site. They do encourage outside food and will have food trucks located on the patio three seasons of the year.

Since the company’s first beer being poured in 2010, Crossroads Brewing Co. continues to bring the members of the Hudson community together in sharing memorable experiences. Each month Athens BrewPub and Catskills Taproom release new events that promote their award-winning beers and IPA’s.

This month Athens BrewPub is hosting trivia nights, Fish Fry Fridays and Weiner Wednesdays that include local dogs with a choice of an abundance of tasty toppings.

Make sure to check out the event calendar located on the Brewery website for upcoming events!

Experience the Crossroads Brewing Company via Amtrak to Hudson Station—Don’t forget to use the See New York and Save 15% discount!

Get picked up from Hudson Station and taken to your reserved NYTRAIN Enterprise Rent-a-Car. Click here to reserve your car or call the Hudson office today at: 518-828-5492. 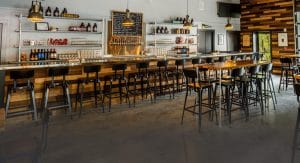