Centre Bell is also the home of the Montrèal Canadiens. Founded in 1909, this Canadian professional hockey team, and Original Six league member is the longest continuously operating professional ice hockey team worldwide, and the only existing NHL club to predate the founding of the NHL. The Montrèal Canadiens have earned the most league championships of any NHL team, with 24 Stanley Cup wins throughout their 107-year history. 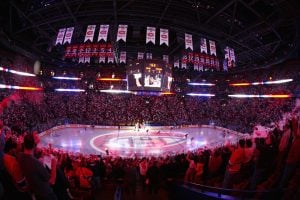