A Gothic Revival-style mansion and garden in midtown Toronto with tours of elaborately decorated rooms and a breathtaking view of the city.

Be sure to visit Casa Loma while in Toronto, Ontario to see this breathtaking 20th century castle and beautiful gardens. This historic site was once owned by Sir Henry Pellatt, a Canadian soldier and financier, who used his fortunes to build his own personal castle. It took over 300 men 3 years to build Casa Loma. After he went bankrupt, the city of Toronto purchased Casa Loma and now hosts over 500,000 visitors every year.

Among the 98 rooms includes a 10,000-book library, a conservatory with marble floors, the 60-foot-tall Great Hall adorned with wooden chandeliers and sculpted figures, and multiple bedrooms and guest rooms. Outside you’ll find the surrounding 5 acres filled with gardens and fountains and the stables that once housed the Pellatt family horses. When built, the castle had three indoor bowling alleys, a rifle range, two secret passageways, 30 bathrooms, and an unfinished swimming pool. a never-completed swimming pool now filled with gravestones, and 30 bathrooms.

Casa Loma is open 7 days a week, year-round. Purchase tickets online in advance to avoid long lines. Tickets range from $20 for children to $30 for adults. All tickets include admission to the castle, viewing of the Pellatt documentary, and a self-guided audio tour.

Public events with tickets available for purchase are also held year-round, including a Mother’s Day brunch, the Maestro’s Gala, Symphony in the Gardens, and Comedy at the Castle, among others.

For an exciting and thrilling adventure, purchase tickets to the Casa Loma Escape Series. The series includes four different games to choose from, ranging from “Escape the Tower” set in 1941 to “King of the Bootleggers” set in the 1920s. Each game has live actors, a creative set design, and full sound to give you a unique game experience.

If you would like to eat while you’re there, BlueBlood Steakhouse is located just inside Casa Loma. This fine-dining restaurant offers a modern cuisine in a historic setting.

“Surpasses all your expectations. We were awestruck by the sheer royalty that reflects of the palace. Must do in toronto.”

Due to COVID-19, Casa Loma is temporarily closed until further notice. But don’t fret, you can explore parts of the mansion from your home with the museum’s virtual tours. For instance, check out “Imagine Dragons at Casa Loma 2020 Virtual Tour” on Casa Loma’s website to walk through the mansion’s dragon exhibit, or browse through photos of various rooms throughout the mansion.

Experience Casa Loma via Amtrak to Toronto Union Center in Ontario, Canada —Don’t forget to use Amtrak’s See New York and Save 15% discount!

Rent a car with Enterprise! Pick up your reserved NYTRAIN Enterprise Rent-a-Car right at Toronto Union Center. Click here to reserve your car, or call the Toronto office today at: 416-425-3777. 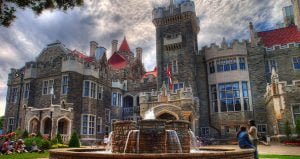