The African Lion Safari in Toronto is a great place to have a getaway into the jungle.

Founded in the 1960s by Colonel Gordon Debenham Dailley, the park prides itself on the conservation of wildlife. Most of the animals seen in the park are members of declining species. The park has been able to assist 30 animals on the endangered species list and 20 that are threatened to go extinct.

The drive-through model was the first of its kind in the 60s, and has outlasted time by placing the guest into the zoo, versus being on the other side of a piece of glass looking at lions and exotic birds.

The tour is a self-guided adventure through the 750-acre park with different areas to accommodate the different animals that call the park home. They have a forest, grasslands and a bush area. Some areas allow for animals to roam and interact freely with other animals as they would in the wild. The park is home to over 1,000 animals from all parts of the world. The driving tour also allows for a 360-degree viewing of the animals in their natural habitat, and if you’re lucky, the animals will interact with you (or your vehicle).

20 to 30 acres of the park have been dedicated to allowing guests walk around the park. These areas also have a bush habitat as well as a farm.

The park operates seasonally, open from the beginning of June to the end of September. Doors open at 10:00 a.m., and the last car enters the park at 4:00 p.m.

“A true African Safari in your Ontario backyard! What a location too! Gorgeous nature, beautiful animals, fun shows … real value for money.”

Experience this unforgettable attraction via Amtrak to Aldershot Station in Ontario—Don’t forget to use the New York By Rail 15% discount!

Where to Stay in Ontario

Looking for a getaway opportunity? Spend the night and experience all Ontario has to offer. Take a look at these great hotel options—some offering exclusive New York By Rail discounts! 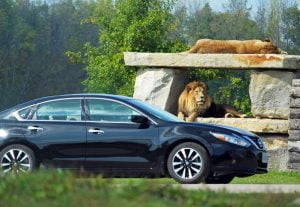