The Great Dome Car is one of a kind. Built in 1955 by the Budd Company for the Great Northern Railway, it was purchased by Amtrak in 1971. Nowadays, after traversing the most scenic rail lines in America, this historic railcar makes its final trips of the year on the Adirondack line between Albany-Rensselaer and Montréal.

While planning a getaway with friends to Montréal for the city’s 375th anniversary, I read about the Great Dome Car’s panoramic views of fall foliage and dramatic cliffs along Lake Champlain and wanted to experience it.

We departed from New York City at 8:15 a.m. for our 12-hour trip to Montreal. During the picturesque ride from Penn Station to Albany, the rising sun illuminated the Palisades on the western shore of the Hudson River. The view was spectacular, and we weren’t in the Dome Car yet!

Stopping briefly in Albany, we got off the train to stretch our legs and watched the Dome Car attach to the front of the train. Once connected, eager leaf peepers rushed aboard, as seats were available on a first come, first served basis, or as the conductor joked, “Gladiator-style.”

The ride north from Albany was inimitable. Three Trails & Rails volunteers from the National Park Service gave commentary about such sites as the Erie Canal, Fort Ticonderoga, Mount Independence as we passed them. I felt like I was in a museum on wheels.

Outside, an amalgamation of orange, gold and red rushed past us, transforming the panoramic windows into a kaleidoscope of autumn hues. A clear day, the vistas across Lake Champlain into Vermont were incredible! The ride was thrilling at times, too, especially as the train crept along a steep cliff, hugging the lake. 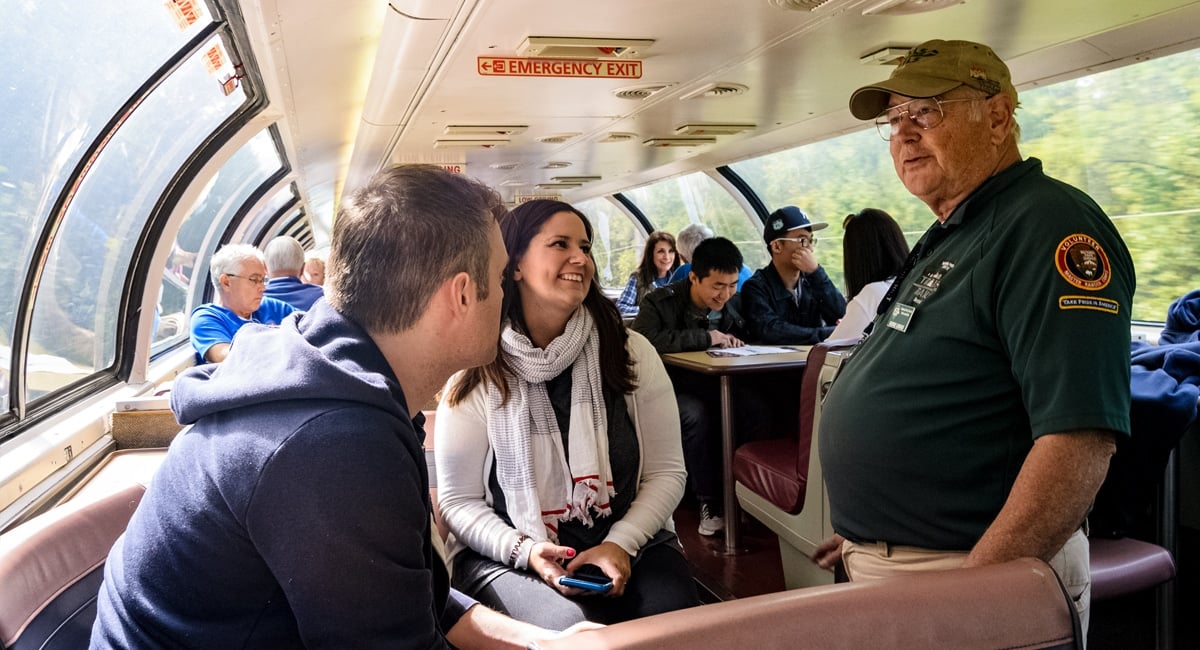 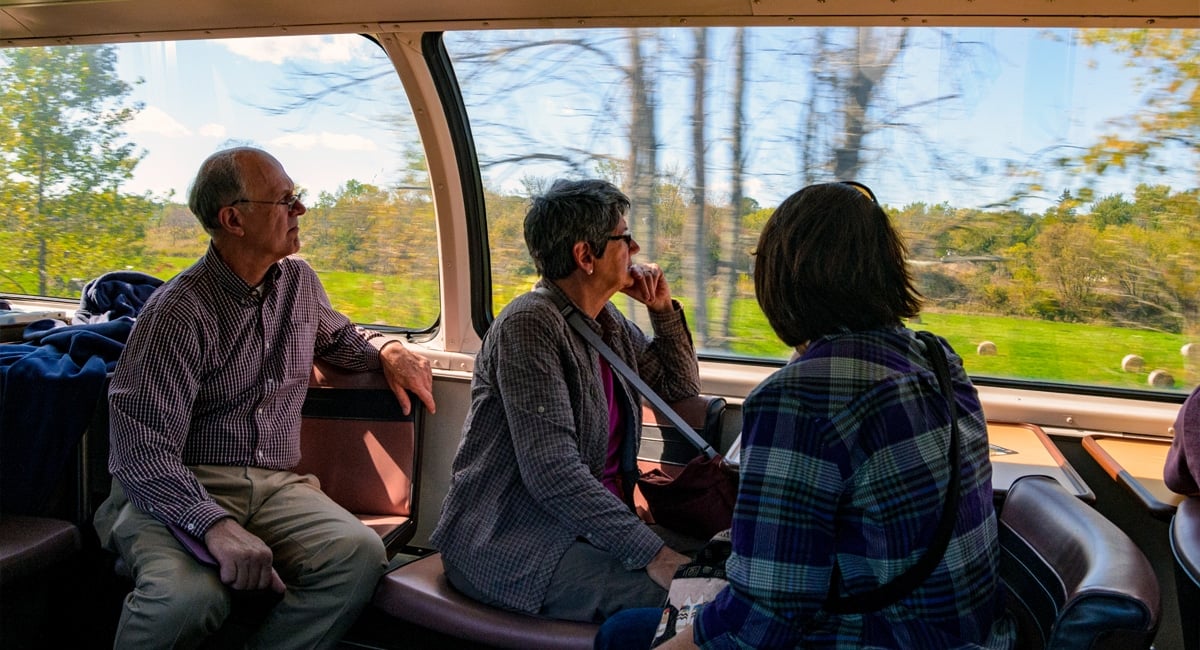 Things to Do in Montreal

Once in Montréal, we checked into the Hotel Bonaventure, an urban oasis across the street from Central Station and an access point to RESO, Montréal’s underground city. Anxious to scope out the surrounding area, it was hard to decide whether to take a dip in the heated rooftop pool; grab a bite at Le Bisco, the hotel’s on-site restaurant; or hit the streets for a late-night adventure. Despite the crisp October evening, we went for a swim. It was the perfect, tranquil conclusion to a long day of travel.

The next day sparked a weekend of restless exploration. After breakfast at Dunn’s Famous, a quirky, diner-style restaurant known for its smoked meats, we toured Mary, Queen of the World Cathedral, with its neo-baroque ciborium and massive pipe organ. We spent the afternoon perusing boutique shops throughout the Golden Square Mile and strolled amongst the statues of legendary Montréal Canadiens players at Centre Bell arena. We capped the day with Korean barbecue at Kalbi in the International District, then enjoyed the Downtown nightlife. 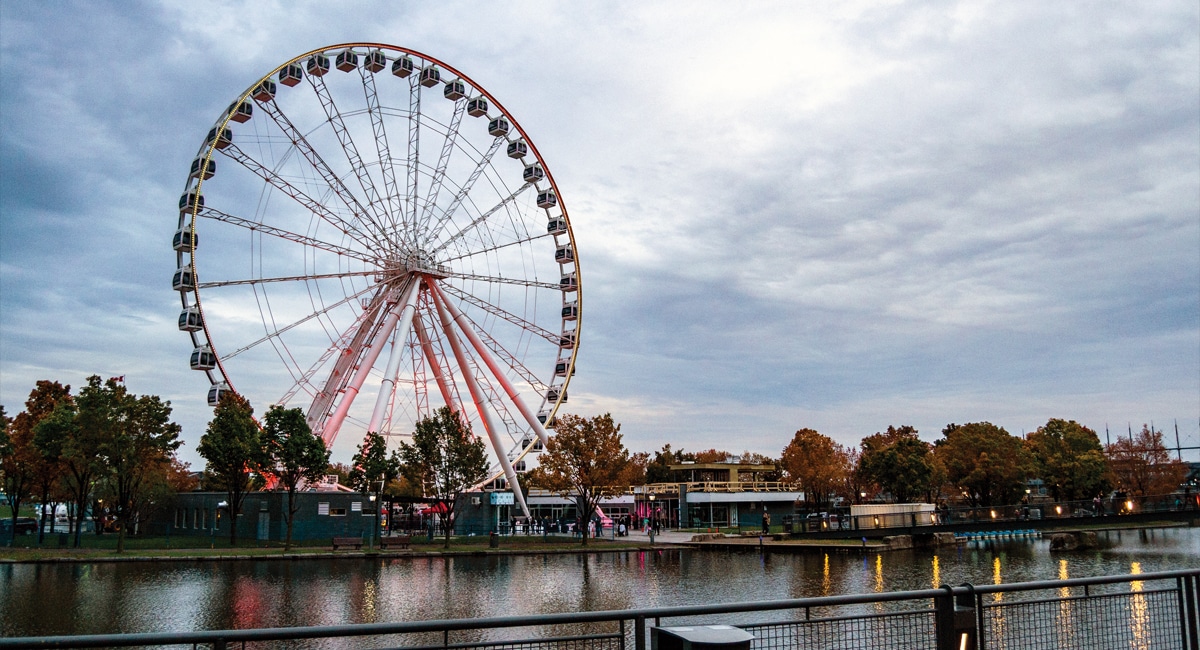 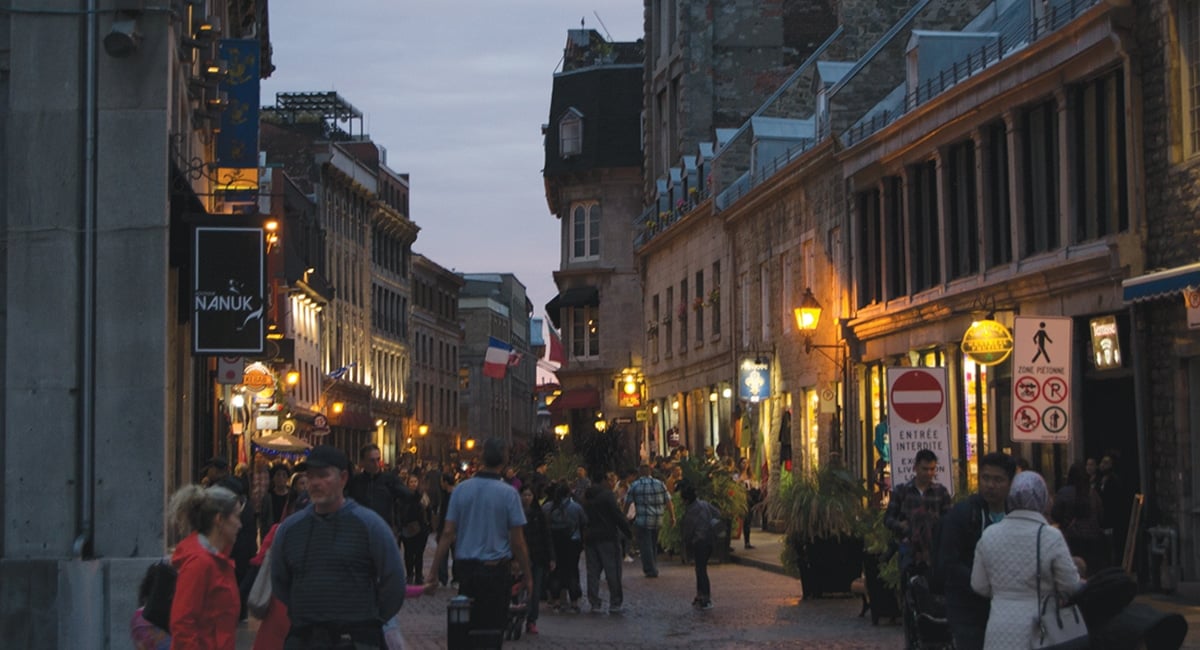 We started the next day ogling the State of the World and Taryn Simon exhibitions at the Museum of Contemporary Art, then passed through Old Montréal heading toward the waterfront, stopping only to admire the beauty of the Notre Dame Basilica from the street. Ambling along the View Port Promenade at Old Port, we couldn’t pass up a ride on La Grande Roue (the Observation Wheel). From its apex, the city skyline filled the view to the west, and St. Lawrence River flowed to the east. On a whim, we made our way to SOS Labyrinthe to race through a two-kilometer maze filled with obstacles and traps. Then, after brews in Jacques Cartier Square, it was time to turn in. We had an early morning departure.

As we crossed the St. Lawrence River on the train back to New York City, the Montréal skyline faded from view. In a unanimous vote, my friends and I knew we had only glimpsed this charming city. A return trip is in the near future.

Where Can I Ride Amtrak’s Great Dome Car?

Don’t forget to use the See New York and Save 15% Discount when purchasing tickets along the Adirondack Amtrak line. Take a look at these other great discounts offered by Amtrak and New York By Rail too.

Enjoy this scenic train ride north aboard the Amtrak to Canada’s largest city. Montréal, with its charming French flare, has a lot of everything for everyone, including major sports and cultural events, exotic flavors, quaint cobbled streets, world-class shopping, and a hopping nightlife. Get a view of the city from atop Mont Royale or aboard the city’s landmark “Grande Roue de Montréal”.