Play Video
Meet 4 Conductors You Might See on Your Next Amtrak Trip.

New York By Rail caught up with four Amtrak conductors in the region to learn more about their backgrounds and what their job is really like.

One essential part of any train ride is the conductor. They greet you, take your ticket, answer any questions and tell you when your station is approaching. Amtrak conductors are the friendly faces and voices that get you through your ride. They’re there to help you, whether you have a basic question or find yourself in an emergency situation. Amtrak conductors are with you every step and stop of the way. 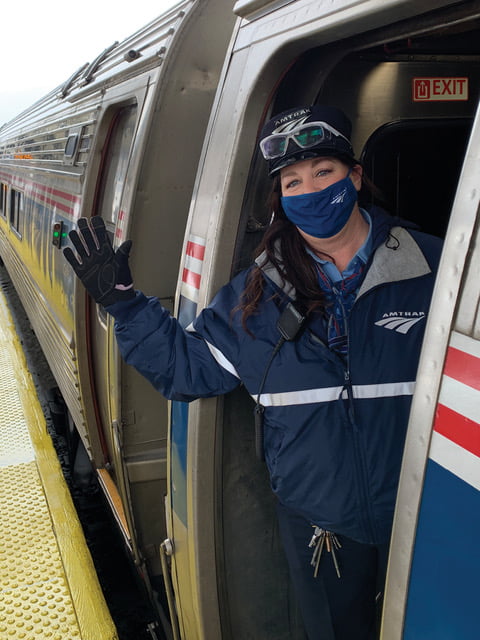 Years as a Conductor: 3

My coworkers. I’ve met so many friends and also my boyfriend here. We are like a big family.

Sigourney Weaver. Although I was too chicken to engage with her. I was starstruck while taking her ticket. I’m sure I smiled awkwardly and told her to enjoy her ride (she was in coach nonetheless).

We had a woman who was having a heart attack on the train. It was very scary. We found a nurse on board who was able to care for her while waiting for the paramedics at a road crossing. Also, my friends (and coworkers) were married on a private rail car last fall. It was amazing. They were married by another coworker who is an ordained minister.

There is nothing like riding along Lake Champlain while traveling north to Montreal. It’s breathtakingly beautiful during any season.

I recently had a passenger in the café car who ordered a hot dog and said that they were his favorite hot dogs. He told us he had a hot dog eating contest on a former train with a friend but no one won because they ran out of hot dogs. The attendant may have cut them off for health reasons though.

It’s comfortable, you don’t have to drive and you can enjoy so many beautiful views along the way. 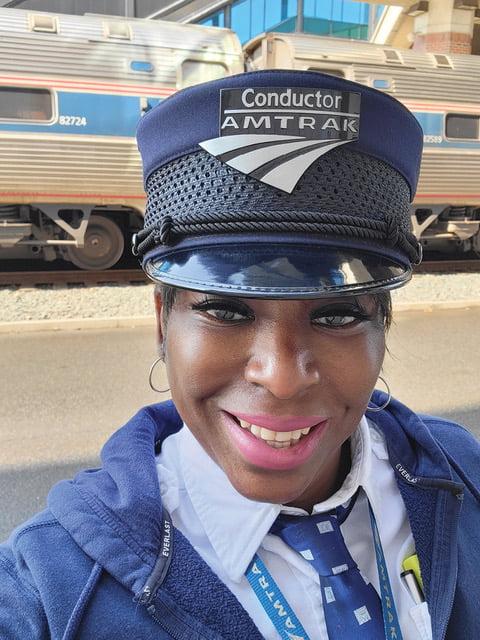 Years as a Conductor: 23

The people. Every day you meet someone different. You’ve got people with different personalities and lifestyles. Just getting to know people, where they’re going, what their lives are about.

I had a medical emergency. A passenger didn’t have his insulin, so he went into diabetic shock. He passed out in the walkway on the train, and I had to ask if there were any doctors or nurses on the train. Then they had to do mouth-to-mouth to revive him and he got put off in Poughkeepsie and went off in an ambulance.

There are actually two: West Point and Bannerman Castle.

I was a Lead Service Attendant in 1997 and we had to go over the border, which we never did. We always took it to the Canadian side and VIA would take it over, so we got to take the train from Albany all the way over to Toronto.

We had a deer at the Rhinecliff Station that was actually on the platform, and he wouldn’t leave! He was coming up to people and sniffing us. One guy took a picture and I asked for his name. He posted it on Facebook as, “My first encounter with Bambi.”

I like it because it’s better than driving. It gets everyone an opportunity to talk, to get to know each other, and to relax. Somebody else is doing the driving, whether you have to work, spend time with your family or just get me-time. To look out the window and see the sights. I’ve taken the train to Montreal, New

Orleans, Toronto, Rutland and Boston. You get to see the world from a different view. If you’re driving, you miss a lot of things. On the train, you can actually sit. There’s so much to look at. There’s so much history. 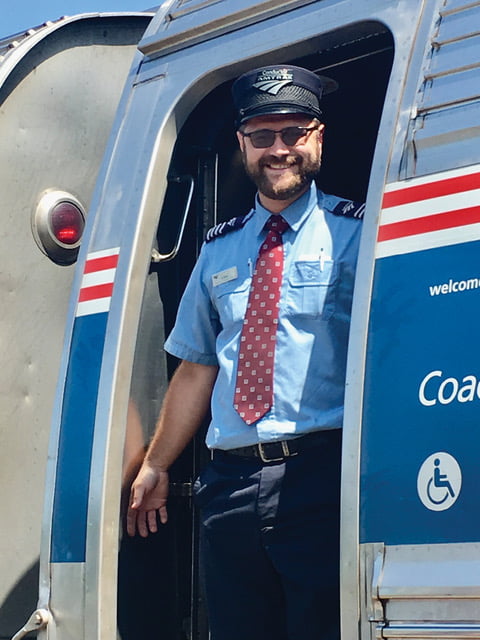 Years as a Conductor: 7

I love the constantly-changing scenery and interacting with the passengers (many of whom are excited to be taking the train) and I love how no two days are the same. I never know what’s going to happen from day to day! I also love watching passengers detrain, only to have someone who they haven’t seen in some time run up to them and hug them; it’s uplifting.

The three people I can think of are Linda Ellerbee, Lewis Black and Brian Cox. For the TikTok generation, I had the No Bones Dog on the train. People were very excited!

Once at Schenectady, a little boy and his family boarded the train. He was very dapper in a little three-piece suit, and he was very happy. I asked his mother what the special occasion was, and she told me that they had just completed his adoption and they were taking him home. He wanted to ride the train. It was a wonderful moment. I gave my conductor hat to the young man so that he’ll hopefully always have something to remember that special day.

My favorite scenic view is from a place commonly called the “Red Rocks” on Canadian Pacific’s Delaware & Hudson Railway. The train is a couple of hundred feet above Lake Champlain and there is an amazing view of Willsboro Bay, Willsboro Point and much of northern Vermont. A short tunnel and bald eagle nests add to the beauty of the area. Approximately 145 miles north of Albany, Amtrak’s Adirondack passes over the line on its way to Montreal.

The longest train ride I’ve personally taken was over 8 hours and overnight from Paris at around 545 miles!

There are certainly instances between large cities where we are, in fact, the fastest travel option, but I think there are so many other reasons to set the time aside for train travel. Imagine boarding the train in a city, passing through the suburbs and emerging into the New York countryside, through valleys, past rivers and lakes, making stops in small towns. These are ground-level experiences that can’t be replicated in the air. The movement of the train as it speeds over switches, the sound of a whistle as the engineer sounds a warning at a grade crossing- these are unique to train travel. There is a reason that the train is on the bucket list of so many. It’s a throwback to a simpler time and for many, it’s romantic in that simplicity. It’s something that everyone should experience. 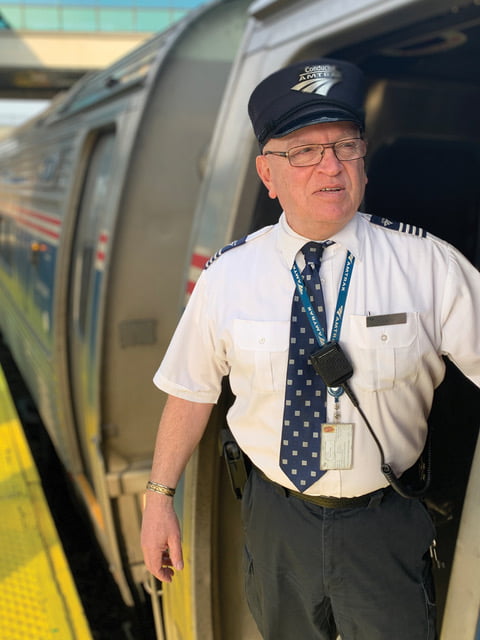 Years as a Conductor: 11

I’ve been a police officer for 25 years. Early on I was with the Railroad Police. Then I came over to Amtrak in 2008. I found it very rewarding to take families on their first train ride, and interacting with the passengers. I’ve always been a people person and I attribute a lot of that to my law enforcement training.

I met Cameron Diaz. She was one of the Charlie’s Angels. I also met Mike Tyson, the boxer. I’ve met several senators: Senator Oberacker, Senator Seward and many other politicians- they all take the train. Tyson actually took a swing at me jokingly!

I was a police officer in the Village of Frankfort, which is in Herkimer County, and I’m very familiar with the 911 dispatchers. We were coming from Frankfort to Ilion eastbound and a man went down. He had a heart attack. I was able to directly call 911 and we directed the train to stop in Ilion, New York. There were two doctors on board and I directed the Assistant Conductor to make an announcement that we need medical assistance, a doctor or nurse, and it saved the guy’s life.

The Erie Canal is just breathtaking. You get to see all the locks and the boats in the summertime and the wildlife. Another good one is the Buffalo Central Station. It’s not active anymore, but that’s quite the landmark. One of the prettiest things is going through the Adirondack Mountains. You get to see all of the hills and mountains.

I’ve never been out of New York, so Penn Station to Niagara Falls. I’ve done the whole route.

I was speaking with a husband, I’ve known him for a while, he’s a regular passenger, but I’ve never met his wife. He was telling me that they’re both lawyers. He was in Penn Station in New York City and she was in Niagara Falls. The wife made the arrangements for the two of them to meet in Syracuse for dinner. They had been apart for a couple of days with work. She sent him the information, the train number and the time of the party. He got on the train, turned his phone off and went to sleep. He woke up in Washington D.C.!

As a former police officer, it’s definitely one of the safest modes of transportation in America. You have friendly people there and it’s less expensive, especially with today’s price of gas. You get food and snacks all day long. You don’t have to stop at a gas station or on the Thruway to get a meal or use facilities. You can enjoy the magnificent views from both sides of the train. Or, you can choose to take a snooze.