In 1777, the Saratoga National Historical Park was the site where American forces defeated and forced a British surrender during the War of Independence. Take a self-guided tour of the battlefield, visit the Saratoga Monument or Schuyler House.

See the houses, monuments and scenic trails of Saratoga National Historical Park and learn about a major battle location during the late 18th century during our fight for independence.

Take a walk through the 22 acres of Victory Woods, the final encampment for the British Army before they finally surrendered to the Americans. Climb the steps of the 155-foot Saratoga Monument, honoring the victory for the U.S. in the Battles of Saratoga. Grab a map and visit the Saratoga Battlefield for a self-guided tour through history!

After your history lesson, test your athleticism and participate in the many outdoor challenges this park has to offer, like the 100 Mile Challenge! Bike, hike, ski or snowshoe along the trails at Saratoga National Historical Park for the chance to win a special prize and a place among some of the top pedestrians in the area!

The park is open sunrise to sunset and the information desk currently operates on a daily schedule of 9 a.m. to 5 p.m.

“A nice piece of American history. Saratoga is where American Independence was saved. Very relaxing place and fun to explore.” 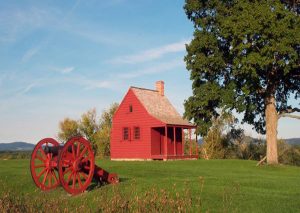 In 1777, the Saratoga National Historical Park was the site where American forces defeated…