Click here for all of the Family Bucket Lists from I Love NY!

A gentle breeze brushes my hair as I take a seat at the bow of the Lil’ Diamond III. As the clouds dissipate, the sun breaks through and shines above the ceaseless stretch of tree-lined and crystalline waterway ahead. A structure appears in the distance, and a group of passengers flood onto the benches around me. We gape upward as the boat glides casually beneath an imposing guard gate, a guillotine-style gate designed to isolate sections of the Erie Canal if there’s an emergency.

It’s the perfect day for a cruise on the canal with Gems Along the Mohawk. A triumph of early engineering and a marvel of its day, a jaunt on this storied channel is a journey through history. Our Captain, Jerry Gertz, narrates the ride with entertaining tales of the canal, pointing out landmarks, like historic Fort Herkimer Church, one of the oldest surviving churches in New York State, and birds, like green herons, blue herons and bald eagles.

The engines hum, rippling the near-perfect reflection of the trees that border the banks of the canal. A group of boats pass, each flying the flag of “America’s Great Loop”, the 6,000-mile water circuit that includes the Atlantic and Gulf Intracoastal waterways, Erie Canal, Great Lakes, Mississippi River and Tennessee-Tombigbee Waterway. They toot their horns as they go by. 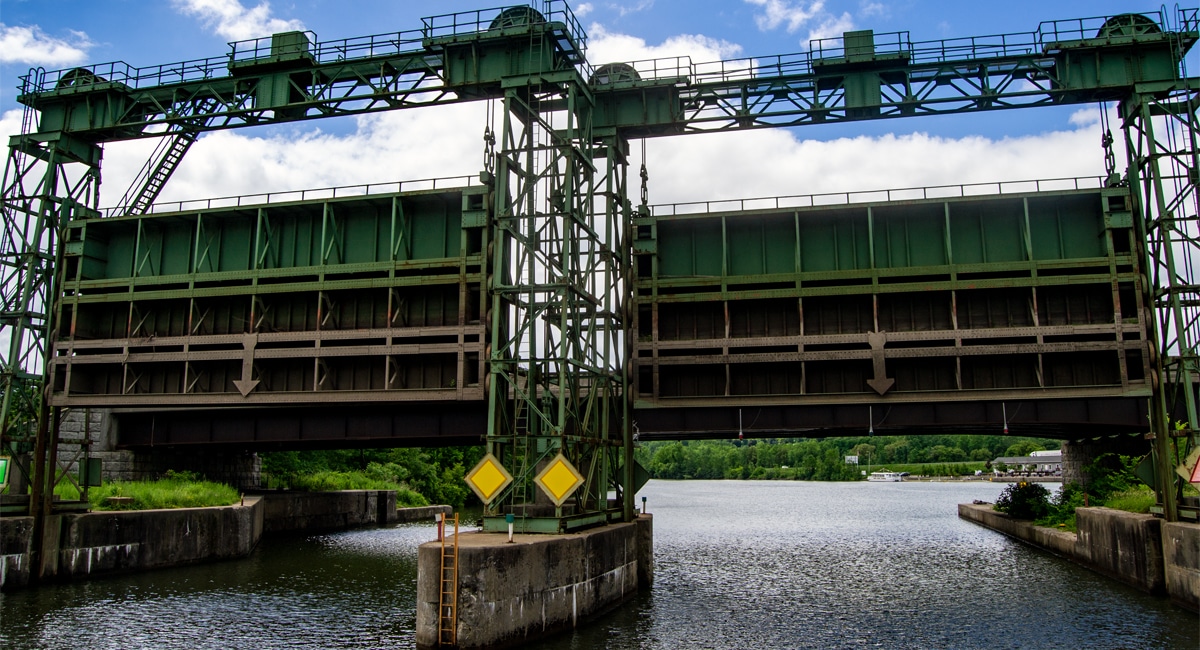 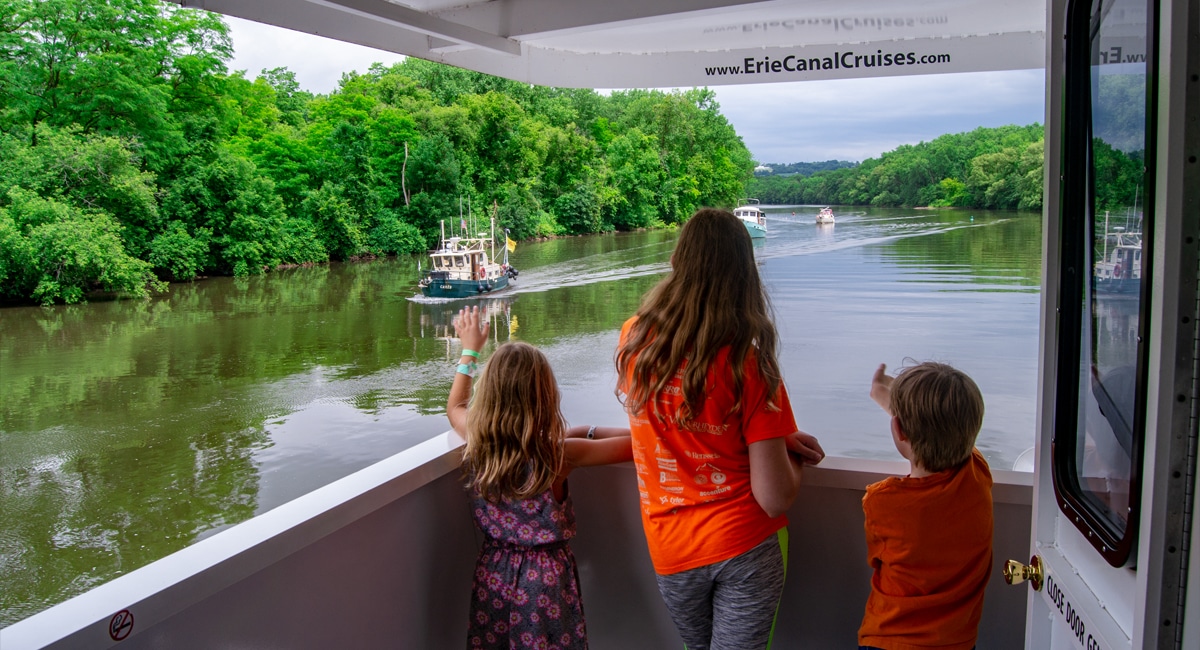 I make my way downstairs to the first of the two-deck, 100-passenger vessel. Designed and built in 2012 by Gertz and his team, the Lil’ Diamond III has its own fully-stocked bar and snack-stand onboard. After ordering a cocktail in a souvenir Erie Canal Cruises cup, I head to the bow for one of the highlights of our tour. 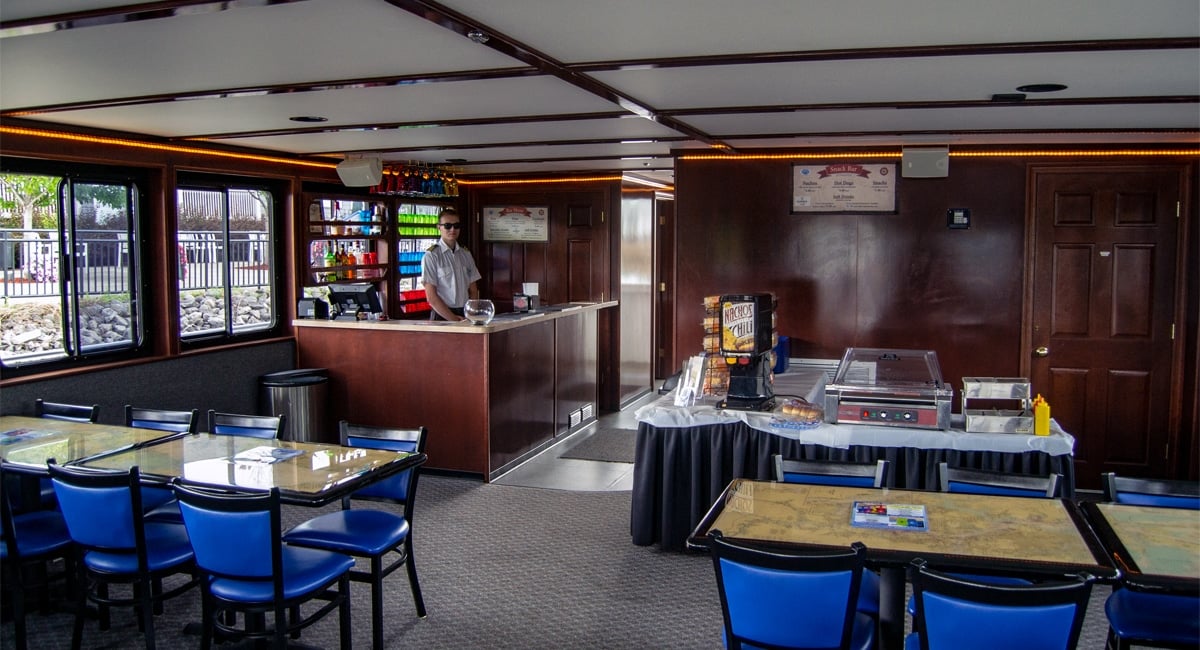 The dining area aboard the Lil’ Diamond III. | Photo Courtesy of Andrew Frey

As we pull into Lock 18 in Jacksonburg, New York, deckhands moor the boat to the walls and signal to the lockmaster. Slowly the century-old gates begin to close behind us as water forces its way through a small opening. The gates toward the bow begin to open as kids gather on the deck to watch our 15-minute descent inside the lock. The lock house appears to float away as we drop 20 feet and then get released into the waterway again. 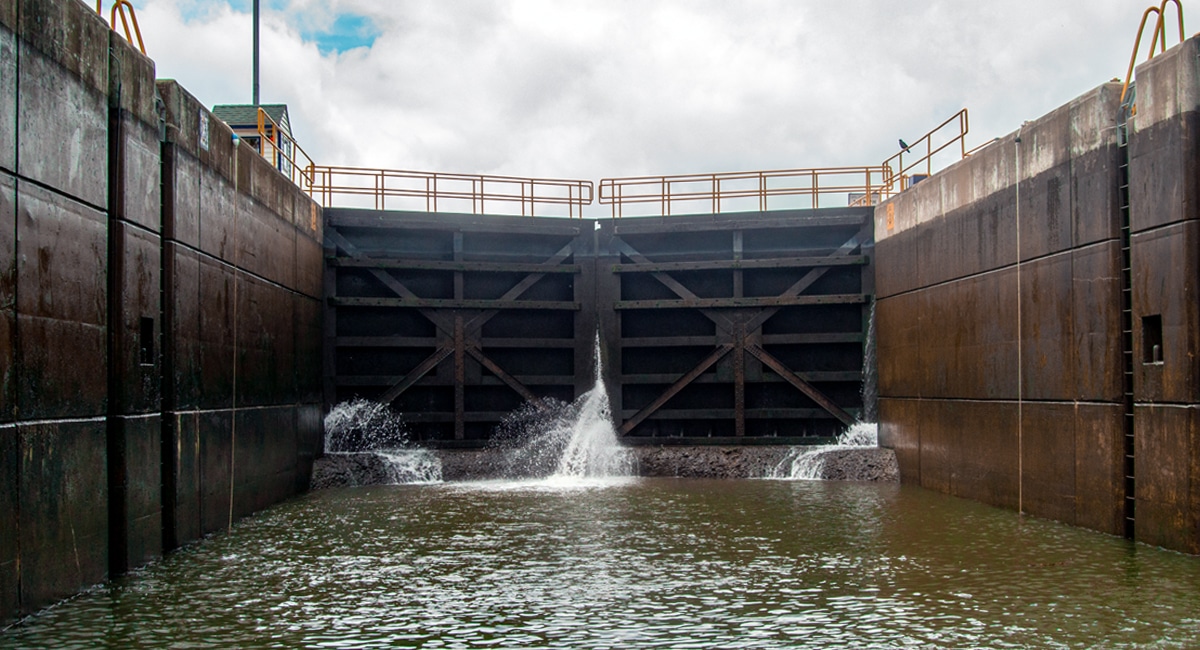 Going down! Being lowered at Lock 18 onto the next stretch of the Erie Canal Cruise. | Photo Courtesy of Andrew Frey 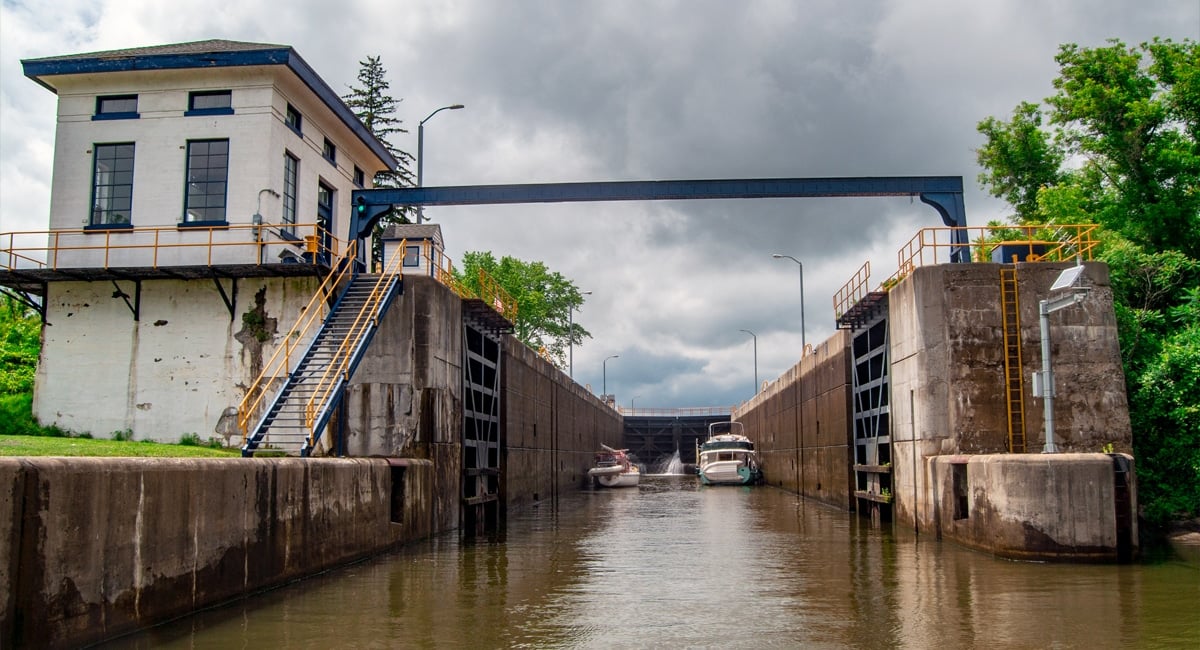 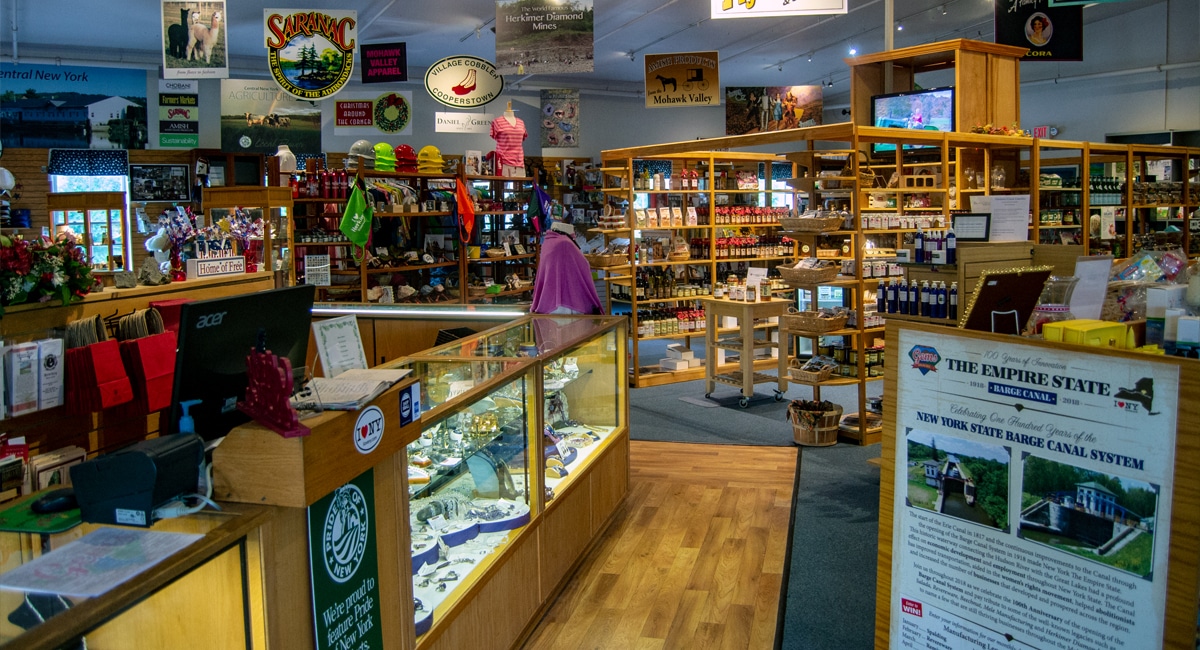 Rising back up is just as exciting on the return trip. Shortly after leaving Lock 18 again, I am back at the Gems Along the Mohawk dock in Herkimer, New York. The 90-minute cruise along the scenic Mohawk Valley has flown by.

Back on the dock, children brush their hands across the flower planters that line the railings. Others poke their heads into a face-in-hole standee of a mule pulling the Lil’ Diamond I, a throwback to the canal boats often pulled by a team of horses or mules who walked slowly along the bank.

With the cruise over, I wander into the Gems Along the Mohawk complex. Home to Erie Canal Cruises, the Waterfront Grille and Gems Along the Mohawk, visitors can reserve a cruise on the historic waterway, delight in fabulous waterside dining and shop from regional New York companies, all at one location. I purchase a few keepsakes, then opt for lunch at the Waterfront Grille. (The “Mushroom Blue Burger” is delicious!)

After my day cruising on the Erie Canal, then shopping and dining along its shores, I am curious to explore the rest of the area, with its charming canal-side communities and its rich canal history. The Erie Canal should be on everyone’s Family Bucket List!

One of the most significant stretches of the 363-mile Erie Canal runs through Montgomery County in the Mohawk Valley. This is apparent while driving along the Mohawk River through the Noses, the only break in the Appalachian Mountains north of Alabama. Passing through these two steep, rocky slopes that drop to the shores of the Mohawk River, it’s easy to imagine the excitement of the surveyors who discovered this mountain gap, allowing the canal to be constructed. The Mohawk Valley literally helped shape the most successful waterway in North America. 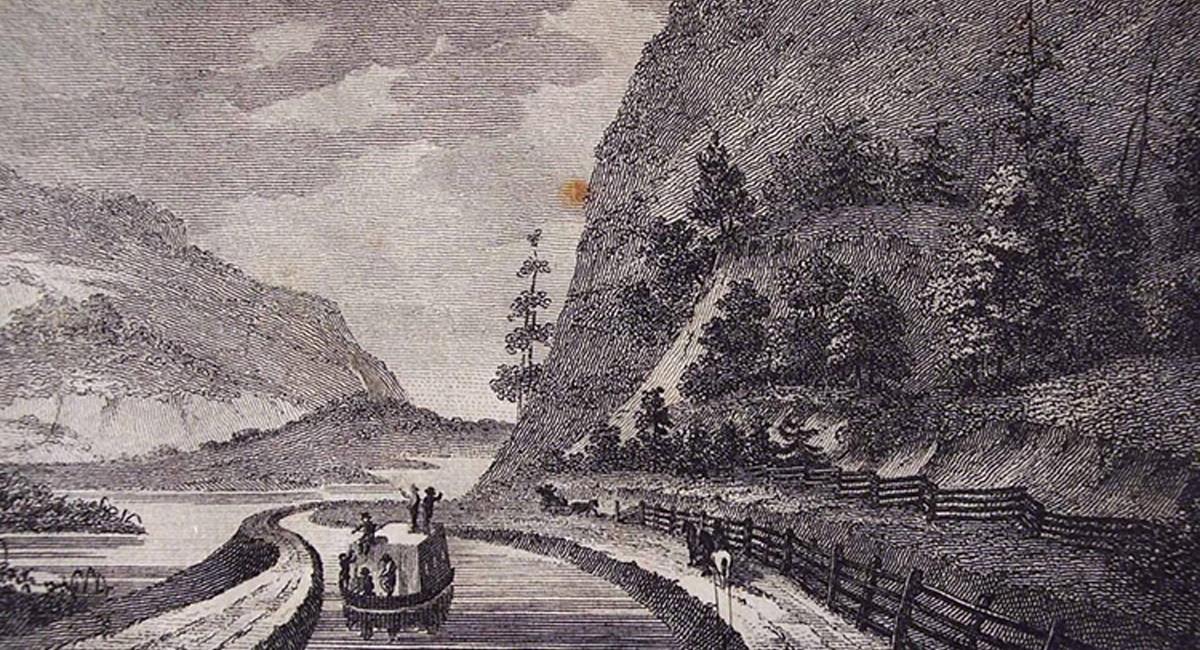 The original 40-foot wide by 4-foot deep Erie Canal opened July 4, 1817, connecting Albany to Buffalo using 83 locks. It took eight years to complete at a cost of $7 million, and it turned New York City into one of the world’s leading seaports. It also contributed to the creation of the United States as a world superpower and economic leader.

Today, the Erie Canal is still a valued waterway. There are 125 boat launches and a number of overnight camping spots along its length. You can also hike and bike the Erie Canalway Trail, a motor vehicle-free path alongside the canal. The Erie Canalway Trail will become part of the Empire State Trail in 2020, enabling cyclists to ride from New York City to Albany, Buffalo and Lake Champlain.

Do It By Train

Take Amtrak from Penn Station to Amsterdam Station (AMS). Don’t forget to use the New York By Rail 15% discount!

The Mohawk Valley is largely rural without convenient public transportation. New York By Rail suggests reserving an Enterprise rental car. Enterprise picks you up at AMS and takes you to your car. Click here to reserve your car or call the Enterprise office in Amsterdam: 518-843-8535. Use discount code NYTRAIN.

Have fun touring the many towns and scenic locales along the Erie Canal and throughout the Mohawk Valley! 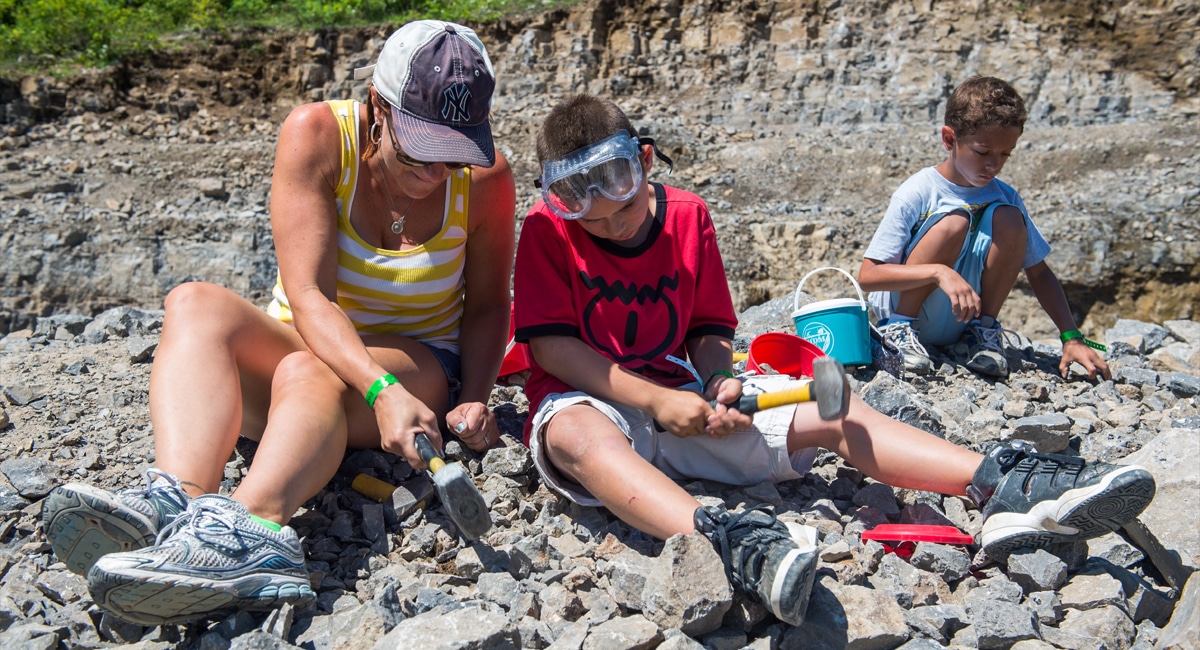 Grab your rock hammer and sluice, and start digging for precious gemstones which are close to five hundred million years old. After you collect your Herkimer Diamonds, create beautiful custom jewelry that is just your style!
HerkimerDiamond.com 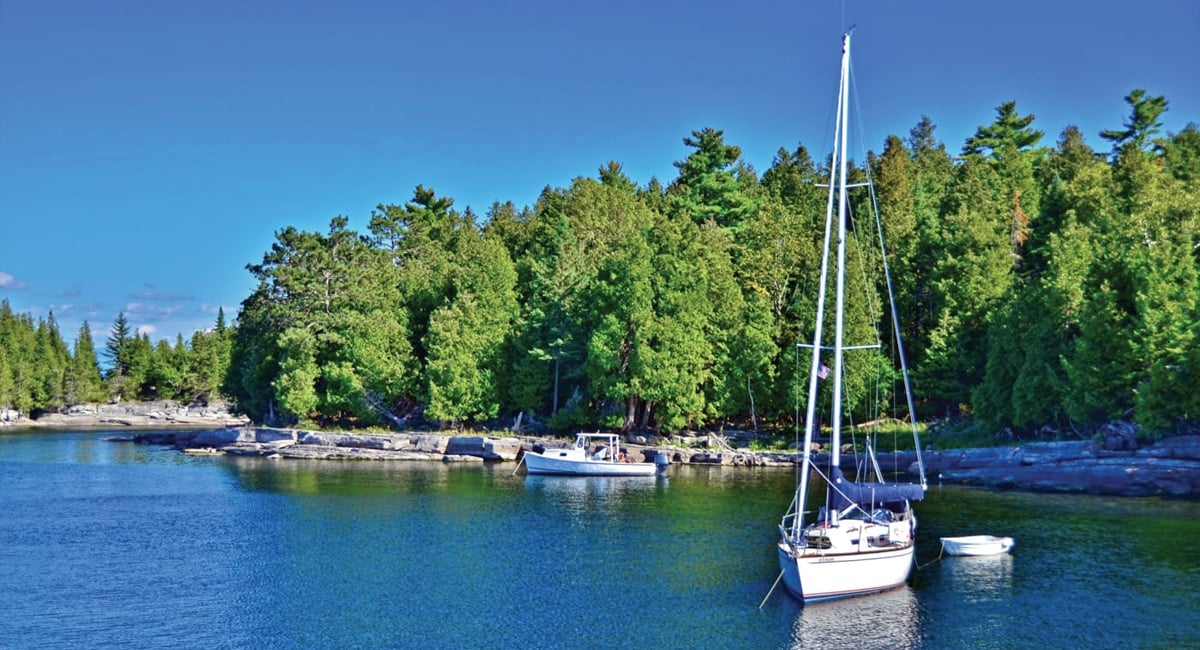 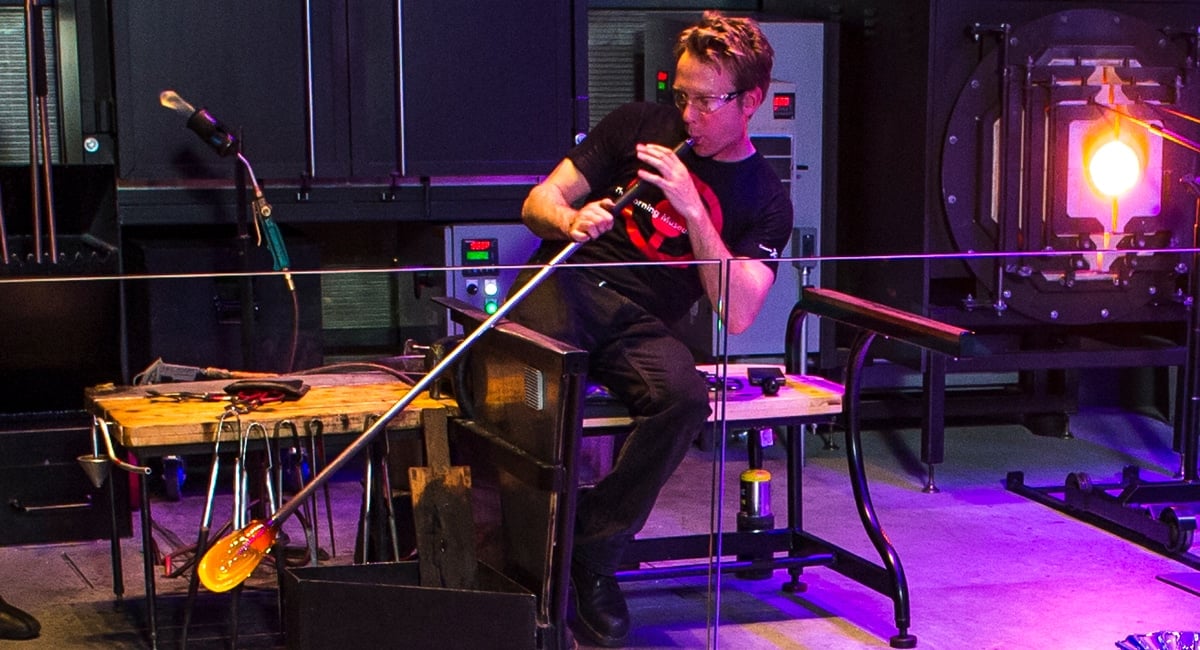 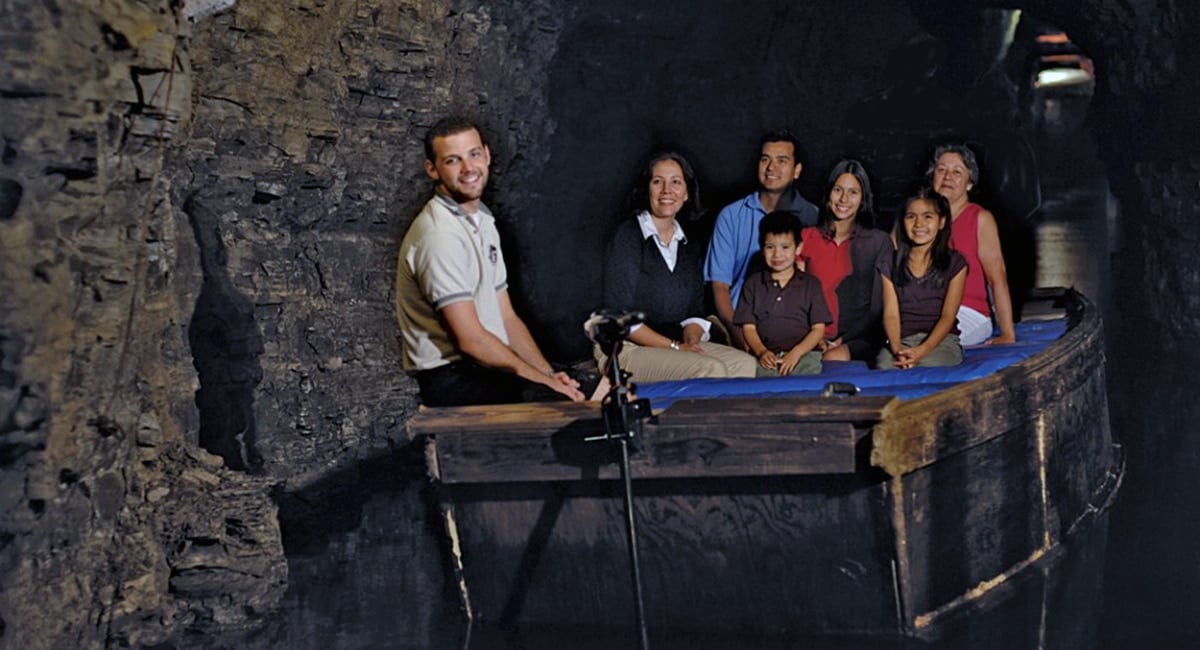 Embark on one of America’s longest underground boat rides. Marvel at artifacts left by miners on the Erie Canal over a century ago, then walk through a 1,600-foot water tunnel blasted out of solid rock.
LockportCave.com 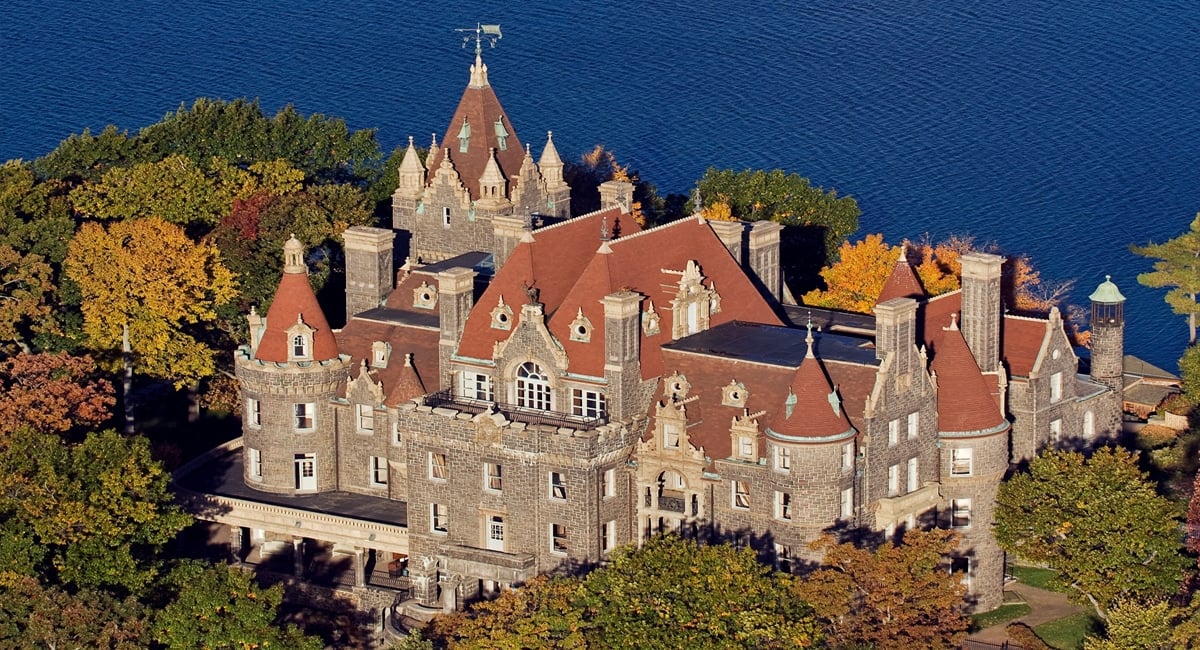 Tour the grounds and magnificent European-style castle of hotel magnate, George C. Boldt, which he built in the early 1900’s in the heart of the 1000 Islands (St. Lawrence River). Take a boat ride around the island. Spend a night like royalty.
BoldtCastle.com